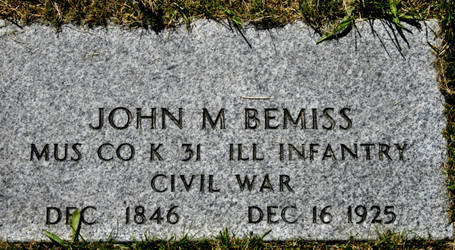 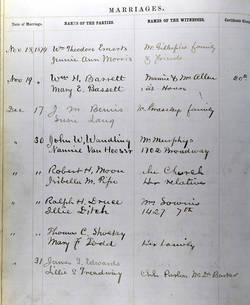 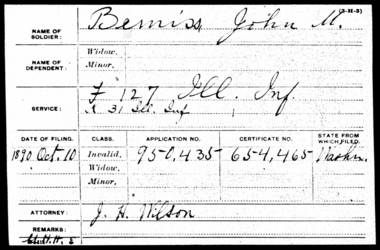 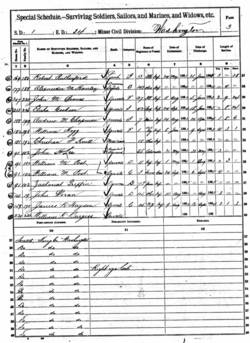 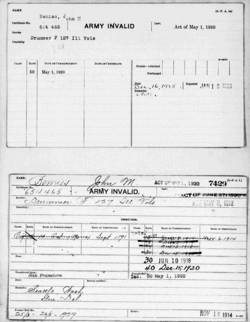 Except for companies "I" and "K" members of the 31st - a three year western theater regiment - were recruited from the southern part of Illinois. The unit was supposed to have rendezvoused at Jacksonville, but ended up being organized at Cairo.

The 31st next moved by steamer to Shiloh/Pittsburg Landing, TN. From there it travelled to Corinth, MS and on to Jackson, TN. It spent the summer of 1862 at the latter place guarding railroads and skirmishing with the enemy.

That fall the 31st was with Union Gen. U.S. Grant during the first attempt - sometimes called the Yokona Expedition - to capture Vicksburg, MS.

During the early months of 1863 the regiment was again with Grant as he continued his often bloody attempts to capture Vicksburg. Besieged, the city finally surrendered on 7/4/63.

Returning to the field the 31st joined the forces of Union Gen. W.T. Sherman as they moved toward Atlanta, GA. That city having fallen, in mid-November the regiment began the march to Savannah and the sea.

Moved to South Carolina by steamer (Harvest Moon), in late January, 1865 the 31st began marching and fighting its way northward through the Carolinas. On 3/24, ragged, dirty and often shoeless, the men of the regiment arrived in Goldsborough, NC.

With the April surrender of Confederate troops under the commands of Robert E. Lee in Virginia and Joseph Johnson in North Carolina the War, for all practical purposes, was ended.

For the 31st participation in the 5/24/65 Grand Review in Washington City preceded final muster and discharge. The former came on 7/19/65 in Louisville, KY with the latter occurring on 7/31/65 at Springfield, IL.

* Likely because of his earlier desertion from the 31st IL, John's enlistment in this unit was under the surname Beemiss.

The 127th, a three year western theater regiment was raised during the summer of 1862 on the heels President Abraham Lincoln's call for 500,000 volunteers. It's individual companies were recruited in specific county and city locations. Company "F" was from the city of Plano Kendell Co. IL. That fall the regiment performed a considerable amount of guard duty at Camp Douglas in Chicago where Rebel prisoners from Harper's Ferry, VA were being held.

In May, 1863 the 127th was in the bloody assaults on the fortifications around Vicksburg, MS.

Following the April, '65 surrendering of Confederate forces under the commands of Gen. Robert E. Lee and Joseph Johnston the 127th proceeded to Washington, D.C. where it marched in the Grand Review. Final muster followed in mid-June.

In April, 1861 civil war swept across America. Despite being only 14 years of age, John enlisted as a drummer boy in the U.S. Army. He enlisted in Illinois.

For reasons unknown, military life did not work for young John. He deserted from his regiment on 4/29/62.

Upon this enlistment we gain our only look at Private John Beemiss. He was 5' 3 1/2" tall, had blue eyes and a light complexion. The unmarried youth listed his occupation as "farmer." Once in the military he again assumed the rank and roll of drummer.

The War having ended, John returned to civilian life, but we do not know where he resided. If he was with his parents he may have been in Ohio in 1867 when his mother died.

With no census information available, the next learned about John is from St. Louis, MO on 1/4/75. That was the date he married.

John's bride was Susan "Susie" Lang (b. 1848 MO). It appears that after marrying the young couple settled in Missouri. Likely their community of residence was the city of St. Louis.

Susan would bear John at least one child, a son they named Harry M. (b. 8/18/76 St. Louis, MO). Susan died in Missouri during 1878. Details of her passing and her final resting place are not available.

The U.S. Census for 1880 found widower John residing alone in in St. Louis working as a harness maker. Son Henry is not listed in the household, so who was raising him is not known.

Based on documental dates, John remarried in 1884. The new Mrs. John M. Bemiss was Fannie Bell Webber (b. June, 1854 KY). John and Fannie would spend the rest of their lives together, but would produce no children.

There is no census data from 1890 because most of that tally was destroyed by fire. That being said, the next sighting on John and Fannie is from 1900.

At the dawn of the new century John and Fannie were in Seattle, King County, WA. What had drawn the couple to the Pacific Northwest is not known. Also not documented is when the couple arrived in the Puget Sound region.

In 1900 Seattle John was the owner of a harness store. The same was true a decade later.

By 1920 John and Fannie had removed from Seattle southward to Tacoma Pierce Co., WA. In Tacoma they were residing under the roof of John's married son, Henry. (Perhaps Henry's residing in the Northwest is what drew John to the region.)

Fannie died 1/27/1924 in Seattle, WA and was buried at the Seattle GAR Cemetery where later her husband Civil War Veteran John M Bemiss would be buried.

John died in Tacoma on 12/16/25. Details of his passing are not available.

Although John died in Tacoma he was not buried there. Instead, he was/is buried amongst his Civil War comrades in Seattle's Grand Army Of The Republic (G.A.R.) Cemetery located near the north end of Capitol Hill next to his wife Fannie Bell Bemiss.

During the American Civil Charles served with his brother, John, in Co. "F" 127th Illinois Infantry. He survived the conflict.