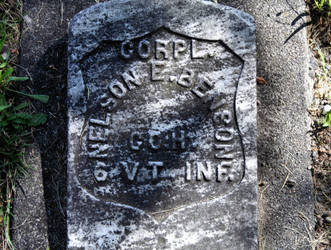 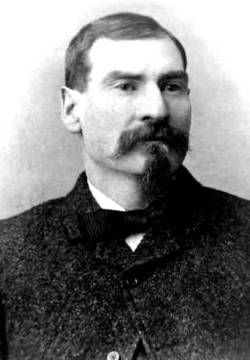 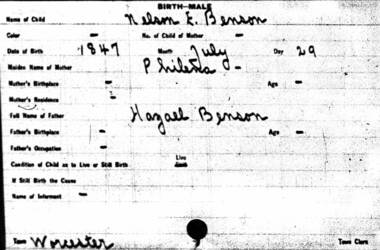 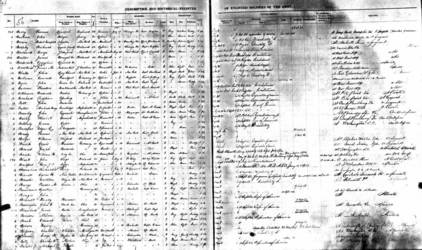 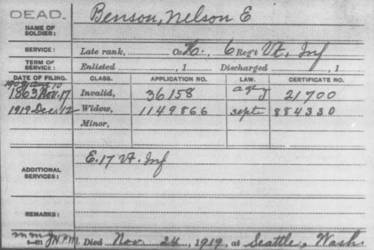 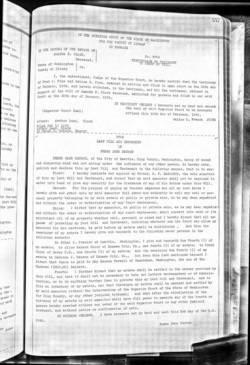 The 6th Vermont, a three year western theater infantry regiment was recruited and organized in less than two weeks during September, 1861. Most companies were created in specific counties (Co. "H" Washington County) within the state.

Mustered into Federal service in mid-October, the regiment was soon en-route to the front. Reaching Washington City on 10/22/61 the 6th was joined with the 2nd, 3rd, 4th and 5th Vermont regiments thus creating the Vermont Brigade. Henceforth the history of the 6th was identical to that of the brigade.

In March, 1862 the regiment moved out of winter quarters and into its first field work Union Gen. George McClellan's Peninsula Campaign. Embarking at Alexandria, VA on the 23rd it landed at Fortress Monroe the following day and by 4/4/62 was marching inland. On the 6th of April it was under fire for the first time in support of an artillery battery.

Departing Lee's Mills the regiment moved up the Peninsula to Williamsburg where, on 5/5/62 it was again in battle. From there it moved to near Gaine's Mill then to Fair Oaks. In neither place was the 6th subject to enemy fire.

Other Peninsula locations of significance during this period were Savage's Station, Malvern Hill and Harrison's Landing. Actions at Antietam MD (9/17/62) and Fredericksburg, VA (12/11 - 15/62) capped on the combat year.

1863. During the Chancellorsville campaign in May the regiment returned to Fredericksburg producing gallant service at Marye's Heights and at Bank's Ford. At mid-year it moved into Pennsylvania for the Gettysburg Campaign.

Soon after Gettysburg the 6th with the reset of the Brigade was sent to New York, NY on account of the draft riots. Returning thereafter it returned to Virginia where it participated in other actions including the Mine Run Campaign (11/27 - 12/2/63). It then went into winter quarters at Brandy Station.

During the Wilderness Campaign 5/5 - 5/7/64) the 6th fought desperately and suffered enormously. Of 441 men going into battle 69 were killed and 127 wounded. This was almost one half of the troops engaged. At Spotsylvania (5/8 - 21/64) the regiment fought at the Bloody Angle where musketry was so severe that oak trees more than a foot in diameter were cut down by rifle balls.

At Cold Harbor (5/31/ - 6/12/64) the 6th was constantly under fire for twelve days. After that it moved rapidly to Washington, D.C. to drive away Confederate forces to assist in driving away Rebel forces commanded by Gen. Jubal Early on July 11-12-1864.

In early 1865 the 6th participated in the series of Union victories that lead to the surrender of Robert E. Lee's Army of Northern Virginia on 4/9/65 at Appomattox, VA. The unit was discharged in July.

As a footnote, the 6th was one of 45 out of 2000 Union regiments which lost 200 men or more in battle. The storied Light Brigade at Balaklava lost 36.7% of its men. The 6th, in The Wilderness along, lost 45%. The regiment was truly one of the 300 fightingest regiments of the Civil War.

The history of the 17th, a three year eastern theater regiment that served its entire period of existence with the Army Of The Potomac, is a peculiar one.  Its birth is almost shrouded in mystery and its infancy and early life was a struggle for existence.

The organization began to be recruited in August, 1863 with the intention to field a regiment of veterans. The Second Vermont Brigade, composed of nine month enlistees flushed with victory at Gettysburg, PA (7/1 - 3/63) had just been mustered out. It was expected that man of these men would eagerly enlist in the new regiment, but that didn't happen. Recruiting was, at best, slow.

On 10/17/63 President Abraham Lincoln issued a call for 300.000 men to fill the ranks of regiments then in the field. Vermont's Governor J. Gregory Smith was able to get the orders relating recruits modified to allow their placement in the new (17th) regiment being raised. Nearly every town in the state contributed to is ranks. So cosmopolitan was the regiment that it was difficult to name a locality from which any one company originated. (Company "E" was mostly raided in Washington County.)

The first detachment of the 17th, a battalion of seven companies, left Vermont on 4/19/64. It had enjoyed no opportunity for drill and little for discipline. Its third attempt for both was on the bloody field of battle in Virginia's Wilderness (5/5 - 7/64).

Marching into Virginia the unit was beset by measles. Most of the men being new, the march combined with the disease exhausted the men and decimated the ranks. Only about 400 halted in the Wilderness on the night of the 5th. Ignorant of the extant of that day's battle carnage and ignorant of what the morrow would bring, the tire, foot-sore soldiers threw themselves on the ground to sleep. During the second day of fighting in The Wilderness the regiment lost 10 killed 64 wounded (10 of them mortal), and six missing. This was out of 313 men fielded.

Bethesda Church and Cold Harbor preceded the regiment's arrival before Petersburg. During initial Federal attacks on that city the 17th, going into battle with 135 men, lost 6 killed and 20 wounded (7 being fatal).

Digging in to besieged Petersburg the 17th occupied an advance line which could only be approached by a covered way. Losses during this period would amount to about one killed and one wounded each day. This would prove to be the most severe and trying time of the regiment's period of service.

During the (7/30/64) explosion of "The Mine" and the battle of the Petersburg Crater the regiment lost an additional 10 killed, 46 wound and 18 missing. Afterwards, the fragment of the 17th that remained was divided into two battalions. Being able to field only about 100 men, some of whom were under care of the regimental surgeon, this was a very sorry time for the 17th.

The ending of 1864 and dawning of 1865 found the 17th remaining in the Petersburg trenches. Actions involving the regiment during this period included PEEBLE'S FARM/POPLAR SPRINGS CHURCH (9/30/64) and Hatcher's Run (2/5 - 7/65). Losses in killed, wounded and missing continued.

During the final Union assault upon Petersburg (4/1 - 2/65) the 17th fought bravely and held firm. The Rebel stronghold pierced, the battle was won, but not without cost. In this, the regiment's last battle, it lost 10 killed and 38 wounded, 5 of those being fatal.

On the morning of 4/5/65 the 17th marched into Petersburg and began the pursuit of Confed. Robert E. Lee's retreating forces. The weary march last almost a week, but on 4/9 as the regiment was moving towards Farmville word was received that the Rebel forces had surrendered. For the 17th, the war was ended.

Guard and patrol duty as well as participation in the 5/24 Grand Review in Washington, D.C. foreshadowed the regiment’s final muster and discharge. The latter occurred in Burlington, VT on 5/24/65. The 17th then passed into history.

* The 17th is one of but a few Union regiments in which combat deaths exceeded those by sickness, accidents, etc.

Based on a predominance of U.S. Census entries, Nelson E. Benson was likely born in 1847. No specific birth month or date has been located within available documents. This birth state was Vermont.

Beyond birth, the first we learn about Nelson is that on 8/14/61 he enlisted in the U.S. Army. At enrollment his community of residence was listed as Worcester, VT, so he was likely still living and working on his parents' farm when he enlisted.

Private Benson's term of service with the 6th Vermont Infantry was to have been three years. He, however, was discharged on Christmas Eve, 1862. Without access to his military service file exactly why he was sent home is not known. Likely, however, it was due to some medical condition.

Without pension records we do not know were Nelson settled after leaving service with the 6th. When we next catch up with him he is no longer living in Worcester but Wheelock, VT. Why? We don't have an answer to that question.

The date of Nelson's resurfacing was 8/18/64. It is significant only because that was when he once again became Private Benson by re-entering the military. While we don't know this for certain, likely he re-enrolled because of the significant financial bonuses or "bounties" which were being paid to enlistees during that period of the War. His new regiment was the 17th Vermont Infantry.

Again, without access to Private Benson's military file from the 17th we don't much about this final period of service other than he received some kind of wound on 9/30/64 during the battle of PEEBLE'S FARM/POPLAR SPRINGS CHURCH near Petersburg, VA. Also, he survived the War and returned anew to civilian life.

Another unknown is where Nelson lived after returning to civilian society in 1865. His whereabouts in 1870 also remain a mystery as no U.S. Census information can be found for him that year.

After the fact, it appears that the next momentous event in Nelson's life was when he married. That appears to have been around 1872 and likely in Vermont because that was where his bride's parents were born and she was birthed in July, 1846. Unfortunately, nowhere do we gain no insight into Phoebe/Phebe J.'s last name.  Although Nelson and Phoebe lived out their lives together, the produced no children.

At the time of the 1880 U.S. Census Nelson and Phoebe were residing in Kidder Caldwell Co., MO. Nelson's occupation was listed as "stone mason."

The U.S. Census for 1890 was, for the most part, destroyed by fire, so we do not have information on the Benson's for that year. A decade later, however, at the dawn of the 20th century the couple was moving westward. In that census they were living in Castle Mountain Meagher Co., MT. In that community Nelson's occupation was "ore mining."

It appears that on 8/10/09 Nelson applied for a U.S. Government disability pension based on ailments or other physical debilities which traced back to his days of Civil War soldiering. Such a stipend was granted, perhaps being paid retroactively to November of 1863. The details of that pension coverage will not be known until National Archives files are obtained.

By 1910 the Bensons had reached the west coast and were residing in Seattle King County, WA. What had drawn them to the Puget Sound region of the Pacific Northwest and when they had arrived here is not documented. In Seattle Nelson did not list an occupation indicating only the he had his "own income."

The 1910 census was the last for Nelson. He died in Seattle on 11/24/19. No details are available pertaining to his death.  At passing he was said to have been seventy three years of age. Burial was/is in the Seattle Grand Army Of The Republic (G.A.R.) Cemetery located near the north end of Capitol Hill.

After Nelson's death widowed Phoebe remained in Seattle. In December, 1919 she applied to the U.S. Government to continue receiving at least a portion of her late husband's military pension. While it appears the request was granted - again -  until pension files can be obtained details of her stipend are not available.

Phoebe Benson died in Seattle during 1925. No specific death date has been located within available documentation. At passing she was 82 or 83 years of age. Her final resting place is in Seattle's Ballard area Crown Hill Cemetery.

* During the American Civil War Alonzo served as a sergeant in Co. "I" 1st Vermont Heavy Artillery. He survived the War.