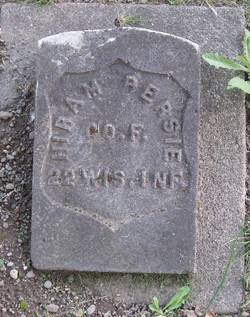 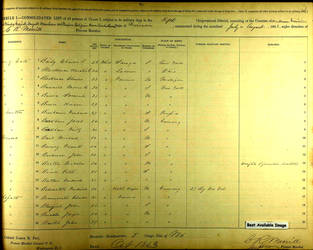 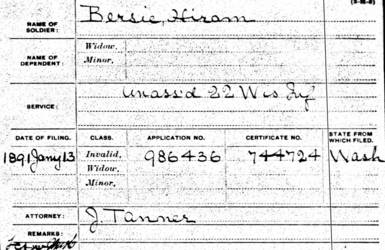 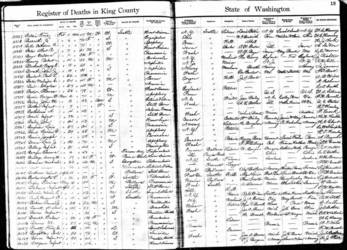 The 22nd, a three year western theater, regiment left Wisconsin on 9/16/62 and moved to Cincinnati, OH to defend that city against a threatened attack by Rebel forces. It then entered Kentucky where it performed guard duty and scoured the countryside in pursuit of the enemy.

In January, 1863 the unit started toward Franklin, TN. From there, in April, it moved to Nashville and then Chattanooga.

On 5/3/64 the 22nd joined Union Gen. William T. Sherman's campaign to capture Atlanta, GA. Although previously it had skirmished with the enemy, Resaca (5/13 - 15) was the regiment's first "real" battle. Its loss was 11 killed and 64 wounded.

The unit next participated in the actions about Dallas (5/26 - 6/1) and was in three smart skirmishes during the siege of Kennesaw Mtn. (6/27). It was highly praised for its unflinching bravery during the battle of Peachtree Creek (7/20).

Next on the regimental slate was the siege of Atlanta. That city being occupied on 9/2/64, the 22nd was assigned to garrison/guard duty at that location.

1865. On January second of the New Year the regiment joined the Union movement northward through the Carolinas toward Richmond, VA. En-route it fought in the battles of Averysboro (3/16) and Bentonville (3/19/ - 3/21) North Carolina.

The War having ended, on 5/24/65 the 22nd marched in the Grand Review in Washington City. Final muster followed thereafter.

* NOTE: The War being over, to save funds, the U.S. War Department quickly began discharging or combining - "consolidating" - existing regiments. Because Private Bursie's transfer from the 22nd to the 3rd occurred during this shut down period, the transfer was likely only on paper.  As he was never assigned to a company in the 3rd ("U" = Unassigned) and did not see field service with that regiment, the unit's history is not being presented herein.

Although one source says Pennsylvania, Hiram William Bersie was born in the state of New York during the year 1835. No specific birth month or date have been found in available documents.

In 1860 (has to be wrong) Hiram married. His bride was   Sally "Sarah" Anne Makee/McKee (b. ca. 1837 NY). After marrying the young couple settled into farming in Cato Manitowoc Co., WI.

In December, 1864 Hiram was drafted into the U.S. Army. According to one database source his surname became Bursie. How prevalent this misspelling of Bersie became is impossible to say without accessing Private Bersie/Bursie's military service and pension files from the National Archives in Washington, D.C.

Without access to the archived files it is also impossible to be specific about our private's military experience. However, we do know that he survived the conflict and, on 1/13/91, applied for and was likely granted a U.S. Government monthly disability pension based either on physical ailments or conditions which traced back to his days of Civil War soldiering or just the fact that he did serve his country in its time of uncivil strife. Again, without access to his files it impossible to comment further on the basis for the pension request and the amount of his monthly stipend. His application filed from Washington State was #986436. His certification number was 744,724.

As just noted, by early 1891 Hiram was in Washington State. We will touch more on that shortly.

At the time of the 1860 U.S. Census the Bersies were farming in Cato Manitowoc Co., WI. A decade later, in 1870, they were still in Wisconsin, but then residing in the community of Glenmore located in Brown Co., WI. At that time Hiram listed his occupation as "shingle man." By 1880 the family remained in Brown Co., WI but the resided in Green Bay. Also, shingle man had become "lumberman."

Sadly, while still in Green Bay, Sarah died. Beyond that it occurred on 9/20/82, no details are available pertaining to her passing. She was/is buried in Greenbay's Woodlawn Cemetery.

We earlier noted that by late 1890/early 1891 Hiram was in Washington State. What had drawn him to the Pacific Northwest and, specifically, to the Puget Sound.  is not known, but perhaps one or more of his adult children lived in the area (Daughter Mary died in Tacoma, Pierce Co. in 1938).

Hiram William Bessie died on 3/2/06 in Seattle King Co., Washington. The cause of his death was "apoplexy" (stroke). He was/is buried in Seattle's Grand Army Of The Republic Cemetery located on the north end of Capitol Hill.