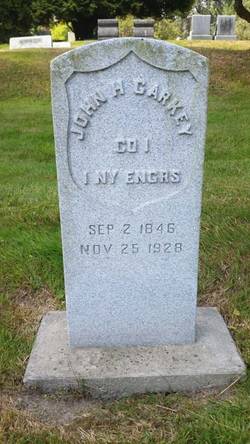 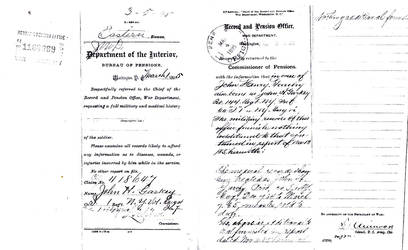 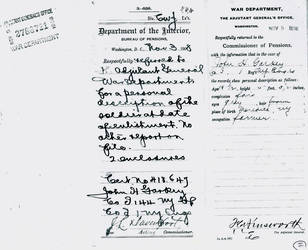 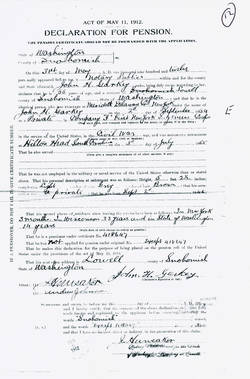 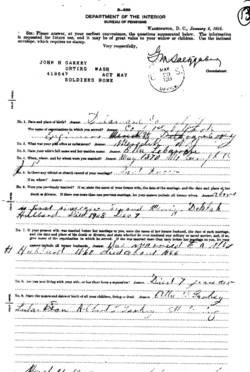 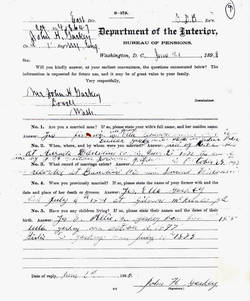 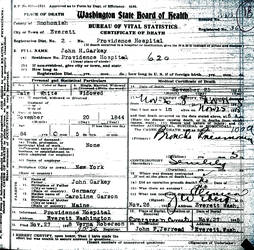 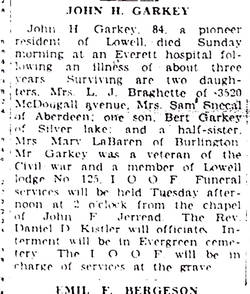 * Note: Service in this unit was under name John Henry Garchy

Recruited in Delaware County, NY, this three year regiment fought in both the eastern and western theaters. Leaving New York on 10/11/61 it remained within the defensive perimeter of Washington City until April, 1863 when it began its southward odyssey.

May, '63 found the 144th participating in a demonstration against the Confederate capital at Richmond, VA. From there it moved to Charleston Harbor, SC where, during that fall and winter it was engaged at Folly and Morris Islands, was involved in the siege of Fort Wagner and in the bombardment of Ft. Sumter and Charleston itself.

In February, 1864 it was engaged at Seabrook and John's Islands, SC before being ordered to Florida where it chiefly performed raiding expeditions, but was active in the action at Camp Finnegan. It then returned northward to Hilton Head, SC where, in July at John's Island it lost 13 killed wounded and missing. The unit next joined Union Gen. W.T. Sherman's forces as they moved upon Atlanta, GA. During this movement it lost 108 at Honey Hill (SC) and DeVeaux Neck (SC) 37 killed, wounded and missing. The fall of that year witnessed unit ranks severely depleted from battle and disease, but one year recruits from their home county soon brought the unit up to normal (approx. 1000 officer/men) strength.

February, 1865 found the regiment severely engaged at James Island, SC where it lost 44 killed, wounded and missing. That was to be the last significant combat test for the 144th which was mustered out of Federal service at the end of June, 1865

* Note: Service in this unit was under the name John Garchy.

Recruited from throughout the State of New York, "Serrell's Engineers", a three-year regiment  which served all along the east coast during its existence, left the state by detachments from October 1, 1861 to February, 1862 rendezvousing at Port Royal, SC where it served until April, 1864. During the American Civil War units such as the 1st were responsible for cutting roads, building and maintaining bridges, as well as designing and constructing both offensive and defensive works for all branches of the service. Additionally, they were an armed fighting force. By WWII such units would be designated "combat engineers."

From May, 1864 eight companies of the regiment served in the Army of The James during early operations against both Petersburg and Richmond, VA. Their services were particularly valuable at Bermuda Hundred Campaign (VA) as well as the lengthy siege of Petersburg where the unit lost 19 killed and wounded.

During that same year other portions of the regiment took part in engagements at Dutch Gap and Chaffin's Farm, (VA), John's Island (SC), Honey Hill (SC), DeVeaux's Neck (SC) and Tulifinny Station, SC. Last active service for the 1st was during the 4/2/65 final assault on Confederate works at Petersburg, VA.


Although U.S. Census reports between 1840 and 1860 are silent regarding John Henry Garkey's parentage and birth date, other available documents point to the likelihood that he was born 11/20/45 in Meredith, Delaware County, New York to John (b. Germany) and Caroline (nee Garson b. ME) Garkey. No information is available pertaining to possible siblings or his childhood, formative or early teenaged years. In all probability, however, he was raised on a farm where he remained until joining the U.S. Army as in one document he noted that he had resided in Meredith for the five years preceding enlistment.

On 9/2/64, several months shy of his nineteenth birthday John H. Garkey, a 5' 3/12", gray-eyed, fair- complexioned farmer enlisted in the U.S. military for a period of one year. Whether by design or scribner's error, the enlistment was under the name John Henry Garchy instead of Garkey.

Private Garchy was initially entered the service of the Union in the 144th NY Infantry, an existing combat unit. His time there was short, however, as in a matter of weeks - the exact time line is not known at this time - he transferred out of this regiment and into the 1st NY Engineers. Once again the surname Garchy appears on documentive paperwork, but now without the middle name Henry.  Still, some files apparently reflect his correct surname as, at one point, reference is made to him being borne on company muster rolls as John H. Garkey.

Company rolls indicate private Garchy/Garkey present for duty during September and November, 1864, but around the first of December he contracted rubella measles. John later reported first being treated at the camp hospital, but admission was refused there because of the contagious nature of his illness. As such he was immediately transferred to a smallpox hospital at Beaufort, SC (and perhaps at Hilton Head) where he remained until 3/7/65 when he was discharged from treatment. Returning to his company, he was reported "present for duty" until mustered out of the service.

With army life behind him John Garkey returned to the farm in Meredith, NY. He remained there only a brief three months before removing to Wisconsin.

Where former Civil War soldier Garkey initially settled in Wisconsin in not known. However, around July, 1866 he was living in Hortonville and by sometime in 1868 was in Augusta. Interestingly, no entry for him can be found in 1870 census for Wisconsin.

At some point in the latter part of 1872 John Garkey and family departed Wisconsin for Gilmore, McKean Co., IA.  Wife Ella/Ellen would die there from unknown causes on 7/4 or 7/6/81, but in the years intervening between 1872 and '81 the family traveled eastward, either to settle or to perhaps just birth children in the homes of relatives as, according to the 1880 census, daughters Maude and "Lulu" were birthed in New York, while son "Bert" was born in Pennsylvania.

After the death of his wife John moved from Gilmore, McKean Co. to Porcupine, Pepin Co., IA   It was likely there on 10/19/83 (one document indicates 1887) he remarried to Delilah Hubbard (nee Baker b. 1833/'34) whose husband had died in 1866. As Mrs. Garkey Delilah would bear no children, but in later years she would note that she was the mother of three children, two of whom were living, so she likely had three (unnamed) offspring by Mr. Hubbard who would have reached adulthood by the time she married John Garkey.

On 8/4/85, while in Porcupine, WI former Civil War soldier John Garkey applied for a U.S. Government disability pension claiming one half disability as the continuing result of having contracted measles while in the U.S. Army. He continued to have pain in several locations of his body including the left leg which were worse during the winter and "during changes in the weather." At the time of his application John Garkey was listed as 39 years of age 5’ 5" tall and weighing 145 pounds. As we shall see, a monthly stipend was subsequently granted.

Because of being lost in a fire, no census data is available for the year 1890. However, information from 1895 places John Garkey back in Wisconsin residing in Oshkosh, Winnebago Co. No family is noted in this listing.    Another Wisconsin listing from 4/25/98 placed John back in Augusta, while an entry from 6/25 of the same year found him in the community of Lowell on the outskirts of Everett, Snohomish County, Washington.

The 1900 census for Welandon, an area near the present day community of Maltby in Snohomish County, WA listed the household of John H. Garkey, b. 1/43 NY, with Delilah, b. 1834 NY as well as son John and his wife and one of their two children. John's occupation was entered as "laborer."

On 12/27/08 Delilah died from a cause or causes unknown. She was buried in Everett's Evergreen Cemetery 1910. Delilah Garka death record says b.1833/NY father James Baker died 12/27/1905 The census for that year placed John in the rural community of Maltby, Snohomish County, WA working as a cook in a logging camp. Likely this was not a "permanent residence" as by 1912 he was residing back in Lowell, but three years later, on 3/25/15 he was living in the Soldiers' home in Orting, Pierce Co., WA. That is also where the census for 1920 found him.

On 9/3/25, while still in the Orting Soldiers' Home, a petition was made to the U.S. Government requesting former private Garkey's Civil War disability pension be increased to the maximum of $72 per month on the grounds that he was "totally disabled and will be as long as he lives. (A) decompensated heart keeps him in bed at all times (while) senile dementia.manifests itself in extreme irritability and makes (it) very hard to keep him satisfied in regard to care." The request went on, "We had to change homes and hospitals continuously....He is a burden to all his relatives. The maximum pension would be helpful." The request was granted.

At some point during 1926 John was moved from Orting to Providence Hospital in Everett, WA. It was there on 11/27/1928 he died. Cause of death was chronicled as bronchial pneumonia with senility contributing.  He was buried at Everett's Evergreen Cemetery beside Delilah.