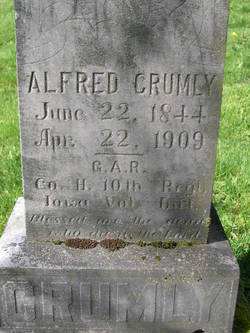 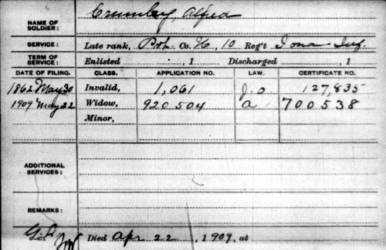 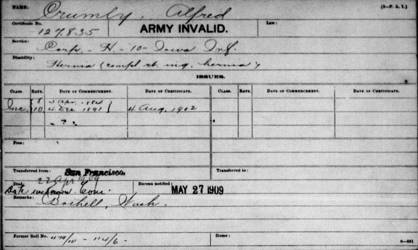 The 10th was a three year western theater regiment. In the fall of 1861 it departed the state and proceeded to St. Louis, MO where, at Benton Barracks, it received its equipment. It then went into camp at Cape Girardeau. Winter quarters at Bird's Point followed shortly thereafter.

On 1/8/62 while on the March and passing through a dense forest 10th was ambushed by the enemy. Fortunately, the regiment recovered from its confusion and dispersed the Rebels.

Next, in Mississippi, came the siege of New Madrid, operations around Island No. 10 and the battle of Iuka (9/19/62).That November it planned to move upon Vicksburg, but when enemy forces destroyed the Union supply depot at Holly Springs that plan was scrubbed. Winter quarters at Memphis, TN followed.

In the spring of 1863 the 10th returned to Mississippi to participate in the Yazoo Pass expedition. Afterwards it moved to Milliken's Bend and fought at Raymond (5/12) and Jackson (5/14.) At the latter place losses within the 10th were terrible, the regiment leavings its dead in profusion on the field. Assaults upon Confederate field works around Vicksburg came next.

After the siege and capture of Vicksburg (7/4/63). The regiment took part in the siege of Jackson. That fall it moved to Chattanooga, TN where, its losses at Missionary Ridge were heavy. Another winter quarters followed.

In February, 1864 members of the regiment re-enlisted making the 10th a veteran organization. Thirty day furloughs home preceded the unit returning to the field in July for railroad guard duties near Kingston, GA.

The year drew to a close with two expeditions against the forces of Confed. Gen. Wheeler through Tennessee and Alabama. These movements took the 10th and its command on a march of nearly 1000 miles. It was capped off when it marched to the sea with Union Gen. W.T. Sherman.

1865. During the early part the closing months of the War the 10th campaigned northward through the Carolinas. It was engaged at Columbia, NC and, for the last time, near Bentonville.

Following the surrender of Rebel forces the 10th moved to Washington, D.C. where it marched in the 5/24 Grand Review. It then moved to Little Rock, AR where it was mustered into history.

NOTE: The birth – to – death biographical profile which follows was completed in July, 2020 during the Covid 19 medical pandemic. It does not display the depth of detail found in many biographies found on this website because the National Archives in Washington, D. C. were closed. Not available were military, pension and other veteran-related files. At a later time those files will be obtained and the information contained therein added to the narrative.

In 1850 Isaac Crumly’s family had been residing in District 31 of Lee County, VA. A decade later, in 1860, Isaac and his new wife Mary were in Washington Greene Co., IA. Noting where the youngest Crumly son, (Thomas P.) was born it is probably safe to speculate that the move from Virginia to Iowa was via Arkansas.

Alfred left Matilda on 8/23/61 and enlisted in the U.S. Army. Until his military service and medical records can be obtained all we can say about his period of service is that he did survive the enlistment, but was granted a disability discharge in early 1862.

Departing the army Alfred returned to Greene Co., IA and Matilda. Not long after his return son Isaac William was born.

An 1892 census for Bothell found Alfred, Maggie along with daughter Eva May residing in Bothell, King County, WA. When and why they had moved west to the Pacific Northwest in general and, more specifically, the Puget Sound region is not known. By 1892, occupationally, Alfred - following in his father's footsteps - was a minister.

1900. Dawn of the 20th century. The U.S. Census for that year found  preacher Crumly, Maggie and children Eva, Una and Jessie residing slightly east of Bothell,  in or near the north King County community of Woodinville. 1900 would be Alfred's last census taking.

A "year" after Alfred's passing, the widow Crumly continued to reside in Bothell with children Eunice and Jessie. A decade later, in 1910 she was still in King County, but by then was residing in Seattle with Jessie and a 12 year old granddaughter identified as Violet Hargus.

Maggie died in San Francisco, CA on 6/22/33. She was 76.4 years old. Her earthly remains were transported back to the Puget Sound area where she was/is buried beside Alfred in Bothell.

* On 8/23/61 both Alfred and Jotham enlisted in Company "H" of the 10th Iowa Infantry. While Alfred would survive the enlistment, Jotham did not. On 2/15/62 in Mound City, IL he died of disease.

**Margaret “Maggie” Bird was the younger sister of Levi Bird. During the American Civil War Levi served in both the 10th and 8th Missouri Cavalry units. Surviving the War, he moved to the Puget Sound region of the Pacific Northwest. He died on 11/1/24. He was/is buried in the Bothell I.O.O. F. (Pioneer) Cemetery located in Bothell King County, WA.