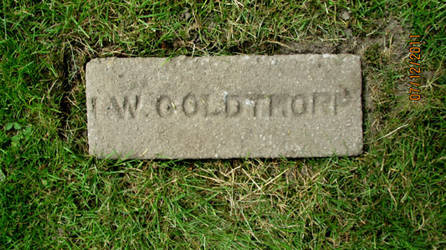 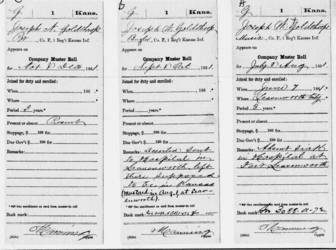 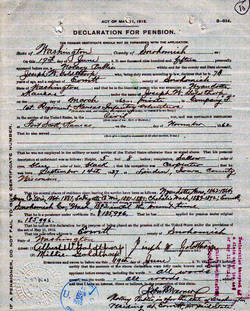 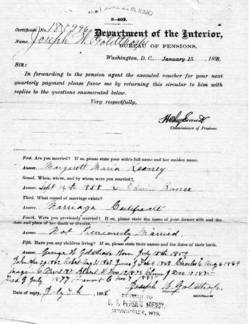 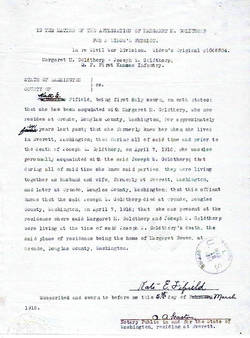 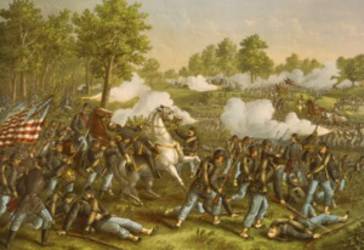 The 1st, a three year "western theater" regiment recruited primarily from the counties of Leavenworth, Douglas and Atchison, left Kansas for Missouri ten days following Federal muster. There it joined the forces of Union Gen. Nathaniel Lyons and first skirmished with at Dug Springs, MO, suffering only a few men wounded.

First real battle action for the 1st came on 8/10/61 at Wilson's Creek, MO where, although Union forces were defeated, the 1st gained a reputation for discipline and bravery. Entering the fray with 644 men and officers, the regiment lost 77 killed and 255 wounded a loss rate of 50%. After retreating to St. Louis with other Federal forces, railroad guard duty filled the remainder of the '62 calendar year.

Early in 1863, after being granted a 10 day furlough, members of the 1st rendezvoused at Lawrence, KS. From February, 1st onward the regiment served as mounted infantry, constantly being employed in outpost and picket duty as well as many of the actions that preceded Union Gen. U.S. Grants siege of Vicksburg, MS which resulted in that city's capitulation to Federal forces on 7/4/63.

After the fall of Vicksburg the 1st moved to Natchez, MS from whence it crossed the Mississippi River, engaged and routed 2000 of the enemy on the Louisiana side and occupied the post of Yandalia. Additional picket, scout and guard duty at Black River bridge east of Vicksburg, MS filled the winter months of 1863-'64.
In1864 the 1st formed part of a Union expedition up the Yazoo River striking the central Mississippi Railroad and engaging the Rebels at Tallahatchie. These activities carried the unit up to June when its term of service expired.

Those departing the service then boarded the transport steamer "Arthur" bound for Ft. Leavenworth, KS and final muster. Near Columbus, AK, the vessel was fired upon by Rebel artillery. While the steamer avoided serious damage, one member of the 1st was killed and another mortally wounded.
With a majority of the regiment having departed for home, two veteran companies of the first, plus some new recruits served in Mississippi, Louisiana, Arkansas and Texas until the end of the War. Final muster/discharge for the 1st came on 8/30/65 at Little Rock, Arkansas.

While one source indicates Joseph W. Goldthorp was born in The Year of Our Lord, 1839, the preponderance of documentation points to his birth date as 9/14/37. The place was Linden, Iowa County, Wisconsin.
His parents were George (b. 1803 Yorkshire, England) and Elizabeth (nee Ginn b. 1809, Ireland) Goldthorp. The Goldthorps were a farm family.

At some point following their marriage the Goldthorps removed from Wisconsin to Kansas where the 1860 census found them residing in Wyandotte, Wyandotte County. Joseph's occupation at that time was noted as "soap and candle maker." When, on 6/7/61 the 5'7 1/2", blue eyed, sallow compextioned, dark brown haired Joseph enlisted in the U.S. Army, his occupation was listed as "carpenter."

Available evidence indicates that following his enlistment private Goldthorp became a bugler, likely in company "F". However, it seems unlikely he had many occasions to bugle because  early as September and October, 1861 company muster rolls show him having been sent to the hospital in Leavenworth, KS during which time he allegedly deserted from the military even though the rolls for November and December of the same year note him as present. (On 3/28/74 the desertion charge was removed after an affidavit was presented by a surgeon that private Goldthorp had indeed been sick and under his medical care in Wyandotte, Kansas during the summer and fall of 1861 and therefore unable to join his command.) Even after having rejoined his company Joseph's military tenure was limited as, on 3/8/62, he was granted a disability discharge on the grounds of "unsoundness of lungs caused by exposure."

The service behind him Joseph returned to Wyandotte, KS and continued to add to his family. It is interesting to note here that son John R. was born, apparently late in 1862 following Joseph return from the military. As the birth was in Wisconsin perhaps the Goldthorps had gone north to visit relatives during this period. In 1864, however, the Goldthorps left Kansas and returned to Wisconsin, settling for a time in Iowa County. The move obviously didn't last long as in 1864 they returned to Kansas and the Wyandotte county community of Qundaro where Joseph's occupation was listed as "laborer."

The seemingly "nomadic" existence evidenced by the Goldthorp clan during the early to late 1860s was not over. The 1870 census found them once again back in Linden, Iowa where Joseph was functioning as a farmer. "Next door" were his mother, father, brother Charles and brother James' family. While the family cannot be located in 1880, in 1881 they left Iowa County for LaFayette Co., WI. From there they apparently moved to Washington Territory. The window for that move is not concise as a subsequent census report says the family was in Washington as early as November, 1885 when their tenth, and final, child was born while another document lists the move to Chehalis, Lewis County, Washington Territory/State in 1889. It was there that the 1890 Veterans Schedule found the family.

Despite their jump to the Pacific Northwest, the Goldthorp travels were not yet ended. Sometime during 1892 the family moved northward in western Washington to the Snohomish County City of Everett. The 1900 census for that region found Joseph, Maria, Albert, Fred, and Freemont sharing a household. No occupation was listed for Joseph at that time, so it is unclear if the family was residing within the city proper, or in one of the rural areas surrounding it.  In 1910, however, the Goldthorps were definitely residing in a rural areas that year’s census placed them  in Snohomish County’s Hartford precinct  east of Everett near the present-day city of Lake Stevens.

In 1908 Joseph and Maria celebrated their golden wedding anniversary. Besides reaching this milestone, they had also been blessed with a statistic that very few large families of the era could claim: They had produced ten children all of whom were living!

1913, tragedy struck the Goldthorp's when Joseph and Maria's home burned. The shock of the loss apparently deeply afflicted the two and prompted their move to the north central Washington community of Orondo in Douglas County to live with daughter Margaret and her family. Margaret subsequently wrote that after the fire her parents were "both very childish and feeble."

Former Civil War soldier Joseph Goldthorp died 4/17/16 at the home of his daughter in Orondo, WA. Cause of death is not known. At death he was receiving a $22 per month U.S. Government disability stipend based on ailments and illnesses which he traced back to his time in the service. Burial was in Everett's historic Evergreen Cemetery.

After Joseph's death Maria apparently remained with Margaret's family in Orondo. Shortly after her father's death daughter Margaret petitioned the U.S. Government for her mother to continue receiving a portion of her late husband's pension. At the time daughter Margaret wrote that her mother would not survive if she was not there to care for her.

Maria Goldthorp died 12/14/19 in Orondo, WA. At death she was receiving a $25 per month government stipend. Her remains were transported westward to Everett for burial beside Joseph.