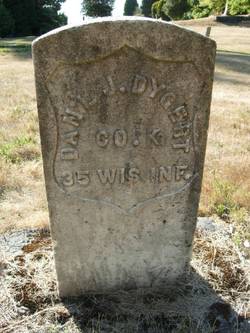 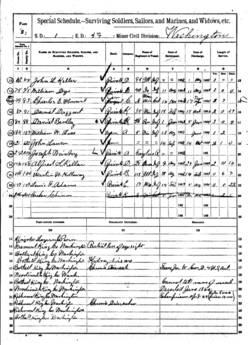 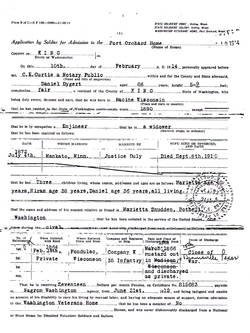 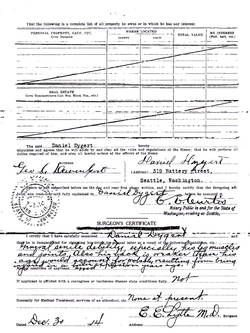 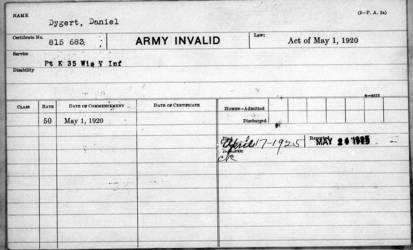 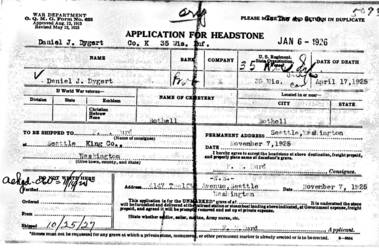 The 35th was a three year western theater infantry regiment. Although organized and mustered into Federal service in 1863, it did not leave Wisconsin until 4/18/64. At that time it moved to Louisiana where it engaged in guard and picket duties. It then travelled to Arkansas where it performed scouting expeditions.

In October, 1864 the regiment proceeded to Devall's Bluff, AR. From there it was ordered to Brownsville, TX, but by year's end had returned to Arkansas.

On 2/7/65 the unit embarked for the Federal attack on Mobile, AL. There it engaged in the siege. It remained there until the city was evacuated in April.

August, 1865 saw the 35th assigned to the Army of the Rio Grande in Texas. Guard duties and assignments aboard government steamers concluded its period of enlistment.

ED. NOTE: The birth - to - death biographical profile which follows was created in August, 2020 during the Covid 19 medical pandemic. It contains fewer in depth details than other biographies found within this website because veteran-related military, pension and other such files housed in the National Archives in Washington, D.C. were not available. Those files will be obtained and the information they contain added to this narrative at a later time.

As noted above, James Dygert died in 1852. By the time the U.S. Census tally in 1860 his widow, Margaret, had remarried. Her new husband - the Dygert children’s' stepfather was John Sheley (b. ca. 1832 loc. unk.). That 1860 census found the Sheley/Dygert family residing in Brothertown Calumet Co., WI.

On 2/17/64 at Fond du Lac, WI James enlisted in the U.S. Army. He was reportedly living in that community at the time.

Private Dygert's unit of service was the 35th Wisconsin Infantry, the same regiment in which his brother Daniel enlisted (2/18/64). Daniel, however, served in Company "K" while James served in "G". Without access to Jame's military service records it is impossible to comment on his period of enlistment beyond the fact that he survived the War.

At some point in time after returning home James married to Rachel Menton (b. 1840 Taycheedah Fond du Lac Co., WI). No marriage date has been found within available documents.

Sadly, the marriage did not last long. Rachel died on 4/16/67 while giving birth to twin girls. One of the twins, Jeanetta, likely died on that date or shortly thereafter. The other girl, Geneva, survived into adulthood.

As of 1870 James was employed as a farm hand on the Brothertown Calumet, WI farm of one Leanhoves Bayer and family. Besides Bayer's wife and children, also in the home was James's daughter, Geneva as well as James' Brothers Leonard and Thomas.

Around 1885 James remarried. The second Mrs. James Dygert was the previously wed Mary Sedore. (Sedore was her maiden surname.) Mary was born in Canada between 1857 and 1860. She had come to the U.S. in 1874. Mary had no children by her first marriage. She and James would not produce children.

As of the dawn of the 20th century James and Mary were residing in Butternut Ashland Co., WI. James' occupation was listed as "barber." They remained in Butternut at least into 1905, but by 1910 had removed to Mt. Vernon Skagit Co., WA where, once again, James was employed as a barber. Perhaps the move to the Puget Sound region of the Pacific Northwest was prompted by James' brother, Daniel, who had moved to the area around 1890, convinced him that the denizens of the wilderness area needed more barbers.........................

On 6/22/09 James began the paperwork to obtain a U.S. Government disability pension based on his days of Civil War soldiering. On 7/3/09 the request was granted and the old soldier began receiving a $12 per month stipend.

James D. Dygert died in Mt. Vernon Skagit Co., WA on 12/26/10. Cause of the 64.8 year old's demise was dropsy and dilatation of the heart. Burial was/is in the Mt. Vernon Cemetery.

After James' death Mary remained in Mt. Vernon. She applied for and was granted a continuing portion of her late husband's pension. Without access to pension records the amount of that stipend is not known.

In 1920 the U.S. Census tally for Mt. Vernon, WA noted that Mary Dygert was operating a rooming house. She died on 2/23/29 and was/is buried beside James.

* NOTE: During The War Of The Rebellion Daniel served in Company "K" of the 35th Wisconsin Infantry. He survived the conflict. He died on 4/17/25 in Bothell King Co., WA. He is buried in the Bothell 1.O.O.F. (Pioneer) Cemetery.