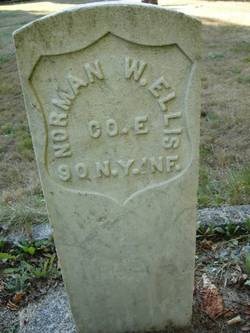 The 90th, nicknamed the Hancock Guard(s), was a three year infantry regiment that served in both western and eastern theaters during the American Civil War. The men were primarily recruited from New York City and surrounding vicinities with the organization being completed by bringing together several "unfinished" regimental factions. It embarked on 1/5/62 for Key West, FL where it performed garrison duty for some months.

In early 1863 the regiment was ordered to New Orleans, LA. From there it moved to Port Hudson, MS where it took an active role in the siege of that place losing 50 killed, wounded or missing. It was next closely engaged at Bayou La Fourche where it lost 71.

March, 1864 saw the 90th take part in the Red River campaign. In August and September re-enlisted veterans were sent home on their 30 day furlough.

With original unre-enlisted men gone, the regiment was consolidated into a six company battalion. In June, 1865 that organization received members of 114th, 116th and 133rd New York infantry.

The regiment then served at Washington City from April until June, 1865. It moved into Georgia concluding its term of service at Savannah. It was mustered out of existence in February, 1866.

ED. NOTE:  The birth - to - death biographical profile which follows was created in July, 2020 during the Covid - 19 medical pandemic. It does not contain the detail depth of other biographies found within this site because veteran-related military, pension and other files housed in the National Archives located in Washington, D.C. were not available. On a later date those files will be obtained and the information contained within them added to the veteran's narrative.

As noted by birth states of the Ellis children, the family moved around a lot during their child bearing/rearing years. Census-wise in 1850 John and his family were residing in Grant Co., WI. A decade later, in 1860, they were in Sherman Chautauqua Co., NY. Sherman and Chautauqua are in the far southwestern corner of the state not far from the Lake Erie shoreline.

On 9/2/64 16.6 year old Norman left his parents' Sherman home and joined the army. His unit of service was the 90th New York Infantry. Without access to his military service records all that can be said about his enlistment period is that he made an intra-regimental company transfer (likely due to organizational consolidation)  and he survived the War.

It appears that, with army life behind him, teenaged Norman returned to his parental home. In 1870 that home was a farm located in Clay Banks Door County, WI.

As of 1880 Norman and Emma with children Elizabeth and George were residing in Clay Banks Door Co. WI. Next door was Brother George and next to him were John and Louisa plus children John Frank, Mary and Ellsworth.

Norman and Emma remained in Clay Banks for at least another decade and, perhaps, longer. As of 1900 they were still in Door County, but by then residing in or near Sturgeon Bay. In that community Norman was employed in a local mill as a shingle sawyer.

By 1910 Norman and Emma had quitted Wisconsin and were residing in Smead, Sanders County, MT. In that location Norman was farming while Emma noted her occupation as "dressmaker." Apparently her mother had also been a seamstress/dressmaker.

1920. Another decade. Another census. That year's tally takers found Norman and Emma in Bothell King County, WA. What had drawn them to the Pacific Northwest is not known. Perhaps, though, it was the timber industry because, once again, Norman became employed in a mill as a shingle sawyer. Also, when they had arrived in the Puget Sound region is not documented.

On 1/28/23 the Sunday Times newspaper of Seattle, WA noted in an article that Bothell mail carrier Norman Ellis was the last surviving member of Bothell's John Bothell (#108) Post of the Grand Army Of The Republic (G.A.R.).Following the American Civil War the Grand Army Of The Republic (G.A.R.) was an influential political and social organization comprised of former Union soldiers, sailors and marines.

On 8/27/80 Norman had begun the application process to obtain a U.S. Government disability pension based on his days of Civil War soldiering. Such a stipend was subsequently granted, but without access to his pension file the size of that monthly payment is not known.

Upon Norman's death Emma petitioned the government to keep receiving at least a portion of her late husband’s pension income. On 5/25/27 that request was granted. Again, without access to her pension file we cannot comment further on the size of her monthly stipend.

Emma died on 1/26/35. She died at the home of her daughter Alma in Seattle WA according to her obituary in the Seattle Times. She was/is buried in Bothell beside Norman.

* During the American Civil War John served in Company "E" of the 9th New York Cavalry. One database notes that he enlisted on 9/28/61 and was mustered out on 5/20/62. Although only one enlistment in the 9th has been documented, another source indicates he was granted a disability discharge from the 9th on 6/6/62, perhaps after receiving a gunshot wound to the head.

** It is possible Ellsworth was named after Elmer Ellsworth. (Rank and unit) Ellsworth was a Union a Union soldier who was martyred by being shot and killed by an Alexandria, VA hotel keeper during the early days of The Rebellion.