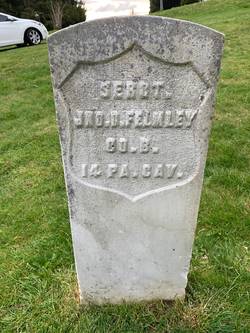 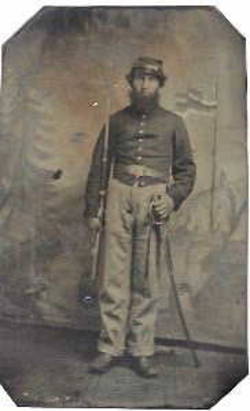 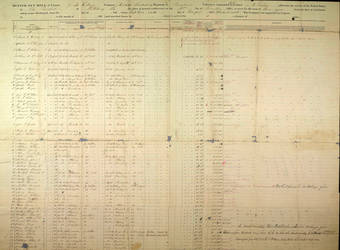 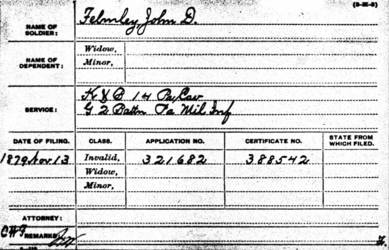 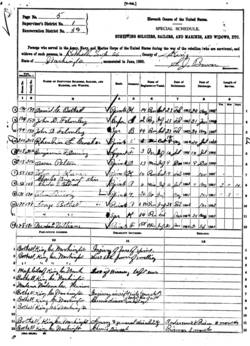 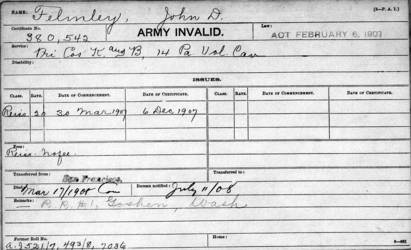 The 2nd was a six month, "emergency" unit created in late June, 1863 as word spread that Army of Northern Virginia under command of Confed. Gen. Robert E. Lee was moving northward from Virginia towards Maryland and Pennsylvania. Beyond the notation that the 2nd was assigned to the Department of West Virginia throughout its period of service, no information is available pertaining to the battalion’s numerical size or duties.

In August, 1862 authority was granted to raise a three year eastern theater cavalry regiment. That unit would become the 14th Pennsylvania Cavalry.

Recruits were rapidly obtained from the city of Philadelphia as well as the counties of Allegany, Fayette, Armstrong, Washington, Lawrence, Erie and Warren. That having been done, in November the regiment was moved to Hagerstown, MD where it was mounted, equipped and drilled.

July, 1863. During the Gettysburg campaign the 14th skirmished with Rebel troops at Beverly and Huttonville, VA. It then marched to Williamsport, PA. There it joined the Army of the Potomac attempting to prevent the retreating Rebel from escaping across the flood ravaged Potomac River into Virginia.

In August, '63 the unit participated in the Rocky Gap raid into West Virginia. At White Sulphur Springs it was hotly engaged with the enemy losing 80 killed, wounded or missing. During this raid it travelled over 600 miles in twenty seven days.

The year 1863 was capped off with a raid into southwestern Virginia. During this expedition an immense amount of enemy supplies as well as miles of railroad track and bridges were destroyed. Loss to the regiment was about fifty men. During 1863/'64 winter quarters at Martinsburg, VA  the unit was almost constantly involved in picket, scouting and guard duties.

The 14th broke winter quarters on 4/12/64. It then proceeded southward into Virginia to destroy the Saltville salt works. During these movements, in May, the unit lost twelve killed and thirty seven wounded.

Next came the Lynchburg campaign. In Lexington, VA the Virginia Military Institute was destroyed. Afterwards, during the June 16th - 17th battle of Lynchburg itself, Federal troops were forced to retire. Acting as part of the Union rear guard the 14th held off enemy combatants for several hours while losing six killed and eighteen wounded.

In July, at Winchester, VA the regiment was hotly engaged with Rebel forces under the command of Confed. Gen. Jubal A. Early. Later that same year it returned to Virginia's Shenandoah Valley to participate in Union Gen. Phillip Sheridan's brilliant campaign. It lost heavily at Opequon Creek / Third Winchester (9/19/64) and was very active at Fisher's Hill (9/21 - 22/64).

A detachment of the 14th was engaged at Cedar Creek (10/19/64). Soon after the regiment made a reconnaissance raid into the Luray Valley. There it lost fifteen killed and wounded at Front Royal. During the winter of 1864 / '65 it suffered severely on raids to Millwood, VA and Ashby's Gap, VA.

After the 4/9/65 Appomattox, VA surrender of Confed. Gen. Lee's Army of Northern Virginia the 14th was stationed for two months at Washington City. It then moved to Ft. Leavenworth, KS where, on 7/17/65, it was consolidated into a six company battalion. Final muster followed in August.

NOTE: The birth - to - death biographical profile which follows was created in July, 2020 during the Covid-19 medical pandemic. It does not contain the depth and detail of other biographies found on this website because veteran-related military, pension and other files housed in Washington, D.C.'s National Archives were not accessible. At a later date those files will be acquired and the data therein added to the narrative.

As noted by the birth locations of the Felmley children, at some point between 1820 and 1823, John W. and family quitted New Jersey in favor of Pennsylvania. In the Keystone state it appears they likely first settled in Beaver County before moving into Huntington County.

No date has been found in available documentation, so it is guessed that around 1845 John married. His bride was Violet Porter Anderson (b. 3/17/25 PA).

The birth locations of the Felmley children show that the family remained in Pennsylvania through the end of the 1840s and throughout the 1850s and 1860s. During all those years they resided in Indiana County, but in 1850 they were farming in or near the community of Washington and by 1860, when John was employed as a miller, Shelocta.

On 2/23/63 left his wife and children to join the U.S. Army. His regiment was the 2nd Pennsylvania Infantry. Without access to his military service records about all we can say about his year in the service is that he survived!!

Exiting the 2nd in January, 1864 John did not remain at home for long. Within a month he had re-enlisted. Likely he did so for two reasons. Firstly, at this point in the War enlistees were being paid extremely lucrative bonuses or "bounties." Secondly, probably because of his age and prior military experience, he was enlisting as a commissary sergeant. This meant he most likely not be exposed to combat situations. Again, he would survive the experience and return to civilian life.

Where the Felmley family lived after John returned home in 1865 is unclear. Sometime between '65 and 1869 he moved his family from Pennsylvania to Illinois. Why and when this was done is not known. In Illinois their place of settlement was Gilead located in Calhoun County. While farming in Illinois one child would be born and that child, plus another, would die.

Although the U.S. Census tallies for both 1870 and 1880 would find the Family’s in Gilead Calhoun Co., Illinois, during that decade the family also made a detour to Missouri. We know that because one of John and Violet's children (Theodore S.)  was born there and two died. The first, son Thomas, died on 10/13/76. The second, son Moses, died on 7/15/77. Both deaths occurred in Worth County.

On 11/13/79, while in Missouri, John began the paperwork process to obtain a U.S. Government disability pension based on ailments or other physical debilities that traced back to his days of Civil War soldiering. While it is acknowledged his attempt to obtain a monthly stipend was successful, until his pension records can be obtained the details of his pension windfall will have to remain unknown.

According to available documentation, at some point in 1882 the Felmley family removed from the mid-west and travelled to Seattle King Co., WA. What had prompted the move to the Puget Sound region of the Pacific Northwest is not known. No occupation is given for John in 1883.

Violet died on 8/24/85. By the date of her passing it appears the Felmleys had departed Seattle and moved north easterly to Bothell King Co., WA. During The War John had served in the 14th Pennsylvania Cavalry with the town’s namesake, David. C. Bothell. It was in Bothell that Violet passed away at the age of 60.5 years of age.  She was/is buried in the Bothell I.O.O.F. (Pioneer) Cemetery.

Documentally it appears that after Violet's passing John remained in Bothell until 1891. He then moved northward to live with one of his adult sons.

1900. A new century. A new decade. A new census. That population tally found John residing near the U.S./Canada border in the Whatcom County town of Rome. In Rome, John was living in the home of married son David, his wife and children. Besides assisting with the chores on the Felmley farm John also served as the community post master.

During the early morning hours of 3/17/08 John Desmond "J.D." Felmley, died in the Van Wyck, Whatcom Co., WA home of his son David E. "D.E." Felmley. At passing - the result of articularscelerois - the old soldier was 82 years, 9 months and 15 days of age. Burial was/is in Bothell beside Violet.