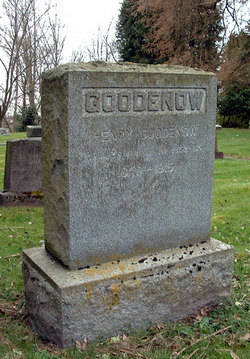 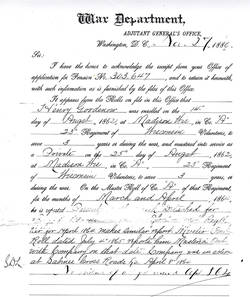 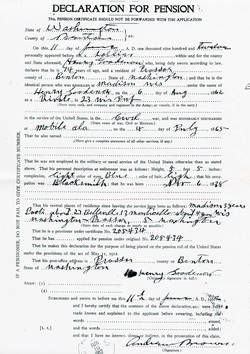 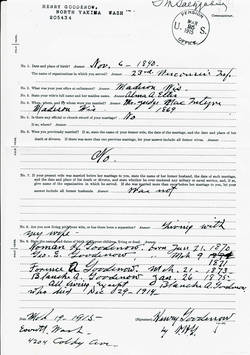 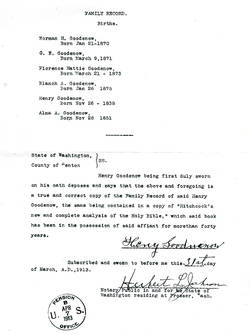 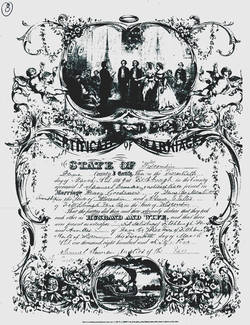 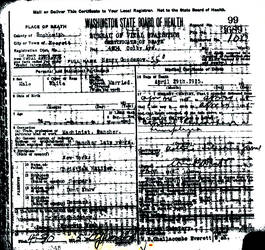 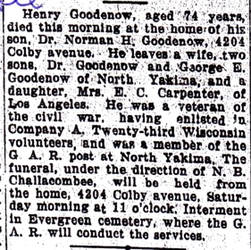 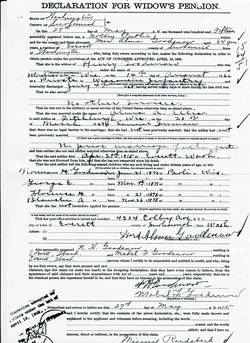 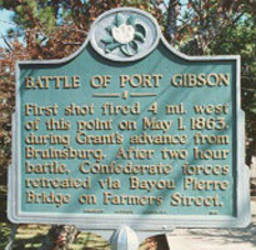 The 23rd, a three year, "western theatre" regiment departed Wisconsin in mid September, 1862 to join Federal forces before Vicksburg, MS. Its first combat was under Union Gen. W.T. Sherman at Chickasaw Bluffs. It then assisted in the reduction of Arkansas Post before moving into Louisiana where three quarters of the men were stricken with disease because of poor sanitary conditions.

Scout and foraging work kept the unit busy until late April, 1863 when it joined Union Gen. U.S. Grant's final push on Vicksburg. It was the first unit of Union troops to enter Port Gibson, MS after that city's fall. Actions at Champion's Hill and the Black River then preceded the first major assault on Vicksburg.  During the latter action the 23rd reached the base of one of the forts while under heavy rifle fire. When Vicksburg surrendered on 7/4/63 the unit had been reduced by losses to 150 men fit for active duty.  A movement into Louisiana capped 1863 combat actions. The year came to a close with the 23rd stationed in Texas.

1864 found the regiment in the Red River Expedition as well as the Louisiana battles of Sabine Cross-Roads and Cloutierville. It then remained encamped at Baton Rouge until mid year when it proceeded to Algiers. Once there it was engaged in guard, post, garrison duty until 5/5/65. It then proceeded to Mobile, AL where siege, patrol and picket duties preceded final muster.

Even identities of Henry's parents is questionable. It appears he was the product of a man named Christian Hallier who was born in Denmark and an unnamed woman also from Denmark. At a relatively early age he was adopted by William C. Goodenow and wife, Eliza who resided in Watertown, WI. Also in the home were the Goodenow's two biological children: Daniel W. (b. ca. 1853 WI) and George B. (b. ca. 1853, WI). No information is available on Henry's childhood or teenaged years, but he apparently learned the blacksmithing trade from his adoptive father as blacksmith was listed as his occupation at the time he entered the U.S. Army.

In the summer of 1862 the 5'6" blue eyed, fair haired/complexioned Henry enlisted in the 23rd Wisconsin Volunteer Infantry. While his unit was very combat active - his company was in action at Sabine Cross-Roads, LA on 4/8/1864- and, at times, beset by illness, Henry appears to have come gone through the war unscathed.

In 1880 the Goodenow's were still in Wisconsin with their address listed as Montrose, Dane County. Henry was a blacksmith. No census is available for 1890, but in 1900 they were residing in Belleville, Dane County. At that time Henry was the town postmaster. Son, George, and daughter, Florence, worked as postal clerks. In 1908 the family was living in Monticello, WI, but by 1910 they had moved westward to Prosser, Benton Co., WA where Henry was listed as a farmer.

March 25, 1915 found Henry and Alma in north Yakima, WA where he was a member of the Grand Army of The Republic. A month later they were in Everett, WA with son Norman Goodenow who was by then a medical doctor. It was there on April 29th Henry died. Cause of death was noted as cerebral haemorrhage. Occupations noted for the former Civil War soldier included machinist and, in later years, rancher. At death Henry was receiving a $30 per month government stipend based on his Civil War service. Burial was in Everett’s Evergreen Cemetery.

At some point after Henry's death and before 1920 Alma moved to Los Angeles, CA to live with daughter Florence and family. It was there she died on 1/18/24. The location of her final resting place is not known.