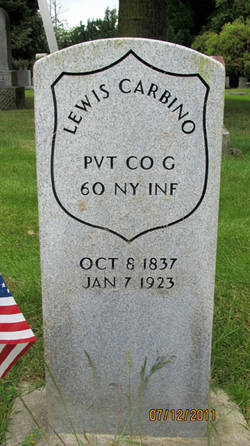 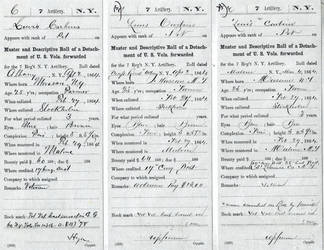 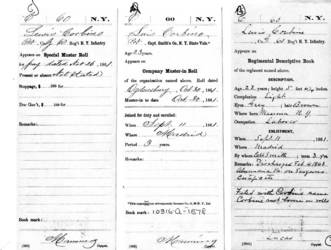 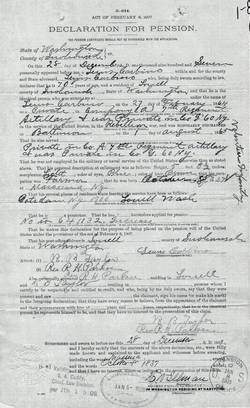 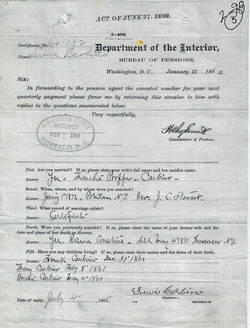 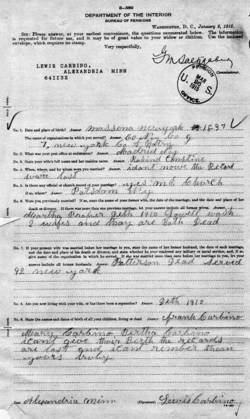 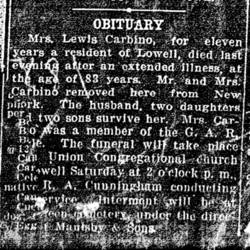 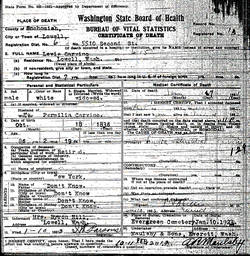 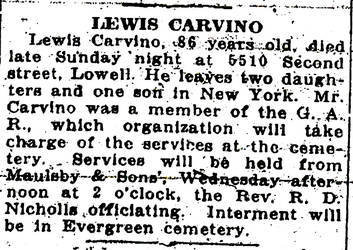 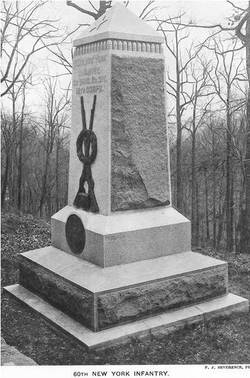 The 60th, a three-year regiment, served in both the eastern and western theaters of The War.  In early November, 1861, it departed the State of New York and moved to Washington, D.C. It was stationed in the vicinity of that city throughout the winter of ’61 and into the spring of 1862.During the summer of ’62 the unit participated in Union Gen. Pope’s Virginia Campaign.

May, 1863 found the 60th in action at Chancellorsville, VA where it lost 66 men.  In July, at Gettysburg, PA it again sustained heavy losses during the defense of Culp’s Hill. By the end of October the regiment had been moved south to Bridgeport, AL. It was present during the battle of Wauhatchie, TN and in the Chattanooga campaign.  In December enough members of the unit reenlisted to garner the regiment “veteran volunteer” status.

1864 saw the 60th participate in Union Gen. William T. Sherman’s Atlanta campaign to capture the city of Atlanta, GA. After the fall of that city it then “marched to the sea.”

In early 1865 Sherman’s armies cut loose from Savannah, GA and marched northward through the Carolinas. This campaign helped bring an end to four years of bloody civil war. The 60th concluded its service career stationed at Alexandria, VA.

Authorization to recruit a ten company regiment in the, then, 13th Senatorial District of New York State was authorized in August, 1862. As recruited the unit was known as the Albany Regiment or Seymour Guard. In the latter part of August the unit was designated the 113th Regiment of Infantry and mustered into Federal service on either 8/18 or 8/19/62. However, in December of that same year the unit's designation was changed to the artillery. As such, on 12/19/62, the 113th became the 7th New York Volunteer Heavy Artillery to which two additional companies/batteries were later added; one in 8/63 and the other in 1/64.

The original ten companies of the 7th left New York immediately following Federal muster and were assigned to serve as heavy artillery and infantry protection in the defense of Washington City. It was to remain there until May, 1864, when Union Gen. U.S. Grant called out the 7th and similar units of "heavies" to join in his Overland Campaign which would ultimately result in the end of four bloody years of Civil War. Most likely, as regimental losses would show, during this latter year of the War the 7th performed as infantry.

In January, 1865 those men whose term of service would expire before 10/1/65 were mustered out and the regiment consolidated into a battalion of four companies/batteries: A, B, C and D. This battalion remained in service until honorably dismissed on 8/1/65.

While a number of community and county names exist in connection with his birthplace, according to a pension document signed by him Lewis Carbino was born 10/8/37 in Massena, St. Lawrence County, NY. Also, throughout his life both his first and last names appeared in print with different spellings.

Within available documentation, nothing can be found regarding Lewis' parentage, childhood, formative or teenaged years. The same has to be said for early U.S. Census data.

In August, 1861 Lewis left his wife and family to answer his county’s call to arms.  His initial enlistment was in Captain Smith’s Company, New York State Volunteers. This organization subsequently became company “G” of the 60th New York Volunteer Infantry. Initial spellings of his name included the first name Luis and the last name Corbino. At enlistment vital statistics for the 23 year old were: 5’ 6 ¼” tall, light complexion, grey eyes and brown hair. His occupation was noted as (farm) laborer.

Company muster rolls for the first year of Private Carbino’s three year enlistment show him as present for duty.  However, as of 8/21/62 he was listed as absent, sick in the hospital at Washington, D.C. A roll for November/ December, 1862 placed him in a hospital located in Portsmouth Grove, Rhode Island and, on 11/19 returned to duty.  This however, seems unlikely as rolls for January and February, 1863 indicated he was hospitalized in Alexandria, VA.  Further, on 2/4/63 Private Carbino was medically discharged from the military at a convalescent camp in Alexandria upon a surgeon’s certificate which claimed he had been unfit for duty for the past sixty days because of a “functional disease of the heart contracted while in the service”

Although he returned to his New York home, farmer Carbino did not remain there long as, almost a year to the day from the time of receiving his military medical discharge; he again enlisted in the service – this time in the heavy artillery. Interestingly, upon this enlistment he had to sign papers stating he had not previously been discharged from the military by disability or court marshal! For enlisting he received the first installment of a $400 enlistment bonus or “bounty.” This second military stint would prove to be uneventful with Private Carbino being mustered out with his battery at War’s end.

On January 1st or the 11th, 1872 Lewis remarried to Marsha/Martha Propper (b. 1830 NY) in Potsdam, NY. She had previously been married to a Mr. Patterson, also a Civil War veteran, who had died. Interestingly, all later censuses identify the new Mrs. Carbino as Permilia or Amelia. Following their marriage the Carbinos settled in Potsdam.

In 1880 the Carbinos were still residing in Potsdam. At that time Lewis's occupation was listed as "farm laborer." Also in the home were George Patterson (b. 1855), stepson and Milton J.Patterson (b. 1859 NY) a nephew. A "next door neighbor" to the Carbinos was William Laroe, another Civil War veteran who later lived in Everett, WA.

Due to a fire in Washington, D.C. there is no census information available for 1890. Ten years later, however, in 1900, the Carbinos were still in Potsdam, so apparently little had changed in their lives.

In 1902 Lewis and family did make a significant life change by moving from New York to Washington State. Why the cross county move was made is not documented. Perhaps it was to be near adult children living in the Pacific Northwest. On the other hand, maybe Civil War veteran and neighbor, William Laroe, had previously  moved west and convinced the Carbinos to do the same.

The Potsdam Herald Reporter newspaper, on September 15, 1905 ran the following story: Mr. Lewis Carbino a resident of Potsdam, but who removed to the State of Washington some three years ago was injured while blasting a rock a few days ago. A piece of flying stone struck him and fractured his leg above the knee in three places, necessitating the amputation of the limb close to the thigh. He is quite an aged man and his recovery is doubtful.

That Lewis did recover is obvious from the fact that the 1910 census recorded him as residing in Lowell, WA a community slightly southeast of the western Washington City of Everett in Snohomish County. At the time his occupation was listed as a laborer who had been married twice and sired four children, three of whom were living. His wife, Permilia, was noted as 80 years of age having been married twice with six of eight children living. That same year, Permilia died.

After his second wife's death Lewis' residential information takes an interesting turn in that, in 1915 he was listed as residing in Alexandria, MN. By 1919, however, he was back in Lowell where the 1920 census noted him as a boarder in the home of George and Clara Waddell.

Former Civil War soldier Lewis Carbino died 1/7/23 in Lowell, WA.  The "official" cause of death of the 86 year old is not known. At passing he was receiving $50 per month U.S. Government stipend based on disabilities traced back to his soldiering days.

Lewis' death was noted in newspapers both in Everett, WA and in Potsdam, NY.
The Everett Herald indicated he had been a member of the G.A.R. and was survived by two daughters and one son. Shortly thereafter the Potsdam Record printed notification that former resident and Civil War veteran Lewis Carbino had died at his home in Lowell, (WA). The obituary noted he had been a member of the Marsh Post 214, Potsdam, NY, G.A.R. when he had resided there. Burial in Washington State was at Everett's Evergreen Cemetery beside his late wife.