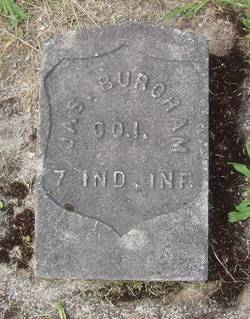 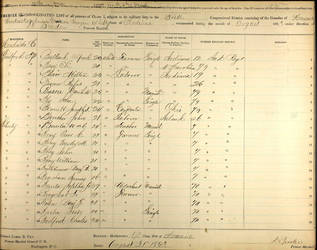 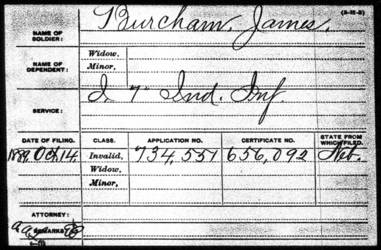 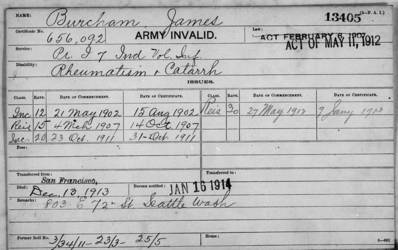 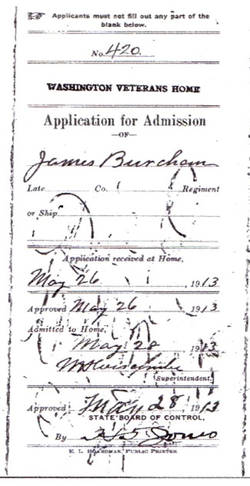 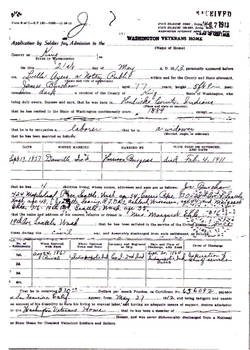 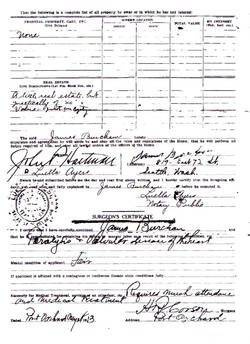 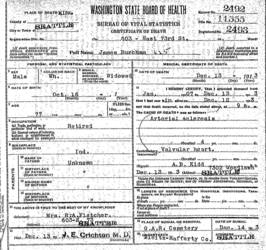 The 7th Indiana began its existence in April, 1861 as a three month infantry regiment. In August, 1861 that unit was mustered out of service and the 7th was re-organized as a three year regiment. The three year 7th’s tour of duty was in the eastern theater of the American Civil War (ACW).

The three year 7th left the state at once for western Virginia. There, it joined the command of Union Gen. Reynolds at Cheat Mountain. It was engaged in the battle of Grier Brier River (10/3/1861), and then moved into camp near Green Spring run.

On 6/17/1864 the regiment participated in the first Petersburg assault. The regiment then remained on siege duty until it was again engaged at the Weldon Railroad.

By late 1864 the ranks of the 7th were badly depleted. That resulted in the regiment being consolidated (9/20) with the 19th Indiana. This was the end of the 7th.

James Bucrham was born on 10/13/1836. His place of birth was within Hendricks County, Indiana.

In the 1850 U.S. Census William Burcham noted his occupation as "farm hand." Not known is whether he worked on his own or someone else's farm.

James married on 9/13/1857 in Danville Hendricks County, IN. His bride was Lydia A. Faucett. Lydia had been born in Indiana sometime during 1837.

There is no documentation regarding how, when and where James and Lydia had met. However, it can be surmised that since both were Indiana-born, they may have known one another since childhood.

Noting birth states of the Burcham children, after marrying James and Lydia settled in Hendricks County, IN. Their first child, Mary, was birthed in or near that county's community of Danville. Exactly where son, Joseph, was born is not known, but the U.S. Census for 1860 found the family in Washington Hendricks County.  In 1860 James noted his occupation as "carpenter."

On 9/13/1861 James enlisted in the U.S. Army.  His unit was the 7th Indiana Infantry. Without accessing his military service records all that can be said about Private Burcham's period of enlistment is that he survived and returned to his home and family.

1870. The Lancaster County, NB community address for the Burchams was Lincoln. There, James was once again, farming.

Censuses for 1880 and '85 found the family still in Lancaster County, NB but then in or near the community of South Pass. While in South Pass James, again, listed his occupation as carpenter.

1900. By the dawn of the twentieth century the Burcham's living location had changed dramatically. No longer was the family in Nebraska. They were now in Seattle King County, WA.

Exactly when the Burchams had arrived here is not specifically known, but it appears to have been sometime during 1899. Another unknown is what drew them to the Puget Sound region of the far Pacific Northwest. We can surmise, however, that the lure may have been the Great Seattle Fire of '89 which had destroyed most of the city. Carpenters were greatly needed!! The Burchams would live out their years in Seattle.

Lydia died on 2/4/1911. Details of her death are not available. She was/is buried in Seattle's Lake View Cemetery located near the north end of that city's Capitol Hill. James did not have many years left in him, either.

On 10/4/1899 while in Nebraska James had applied for and been granted a U.S. Government disability pension. The basis for the granting was rheumatism and cataract (infection) the origins of which traced back his days of Civil War soldiering.

On 5/21/1913 James' family began the paperwork to have the old soldier admitted to the Washington Veterans Home located in Retsil, Kitsap County, WA. At that time we catch a glimpse of James Burcham the physical being. At the age of 76.7 years he was described as being five feet nine inches in height and having a dark complexion.

It appears by the time admittance papers to the Veterans' Home were filed, James' only real asset was his thirty dollars per month pension stipend. Thus, it seems he likely did not own the 819 East 72nd St. Seattle home in which he had been living.

In all, the old soldier's life situation at the time he entered the soldiers' home was not good. He was diagnosed as suffering from "paralysis and valvular heart disease." The superintendent of the home commented as such on the application form: “I recommend the admission, as this old fellow is in bad shape. He is now in our Hospital. His friend, or people, shipped him over here and he is too feeble to send back and I would not know where to send him or what to do with him. He is in a very bad condition." Former Private James Burcham was admitted to the Home on 5/28/1913.