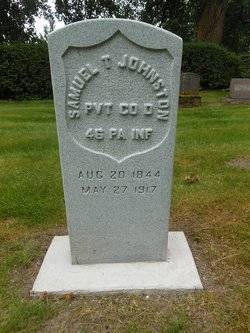 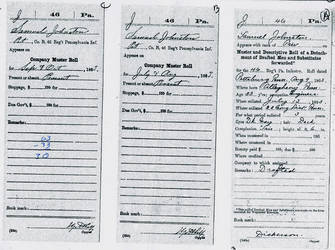 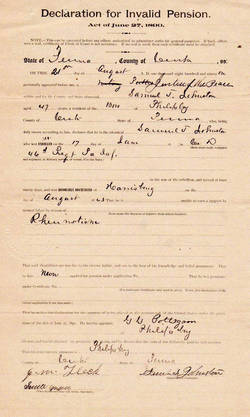 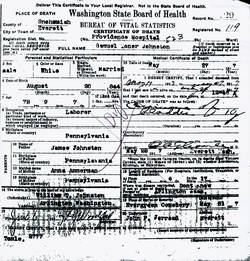 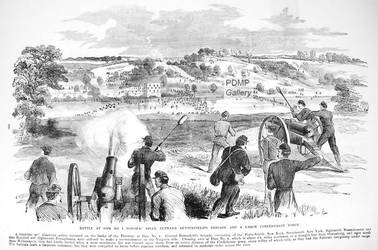 Army of the Potomac

In June of 1863 rumors were constantly afloat concerning a threatened invasion of northern Border States by Confederate forces. As a result, in Pennsylvania a number of short term "emergency" regiments were recruited to help defend the state. In all, twenty-eight such units were raised, some of which were mustered into federal service and actually joined the Army of the Potomac for a short time after the battle of Gettysburg.

Others considered state "militia" regiments were assigned throughout the state preserving order, performing guard duties and providing other valuable services. The 46th appears to have been a 90 day unit in the latter category. All emergency federal and state units were apparently disbanded in August once the "emergency" had passed.

Nothing is known about Samuel's childhood, formative or early teenaged years.  The first documental information pertaining to him appears in July 1863 when, just prior to his 20th birthday, he enlisted in the military.

According to Samuel's telling, in mid June, 1863 he enlisted in the 13th Pennsylvania Cavalry at Philipsburg  in Centre County, PA, (likely his place of residence) PA. After a "few days", however,  he was taken to Huntingdon, PA and from there to the Frankford Arsenal near Philadelphia where he was mustered, not into the cavalry, but into Company "D" 46th Pennsylvania Infantry to serve a maximum period of 90 days. The time he did serve, slightly less than one month, was spent guarding conscripts (draftees) and substitutes - individuals who had been paid to serve in the stead of a drafted man.

Regardless of Samuel's tale, existing documents point toward his period of military service beginning on 7/20/63 with the 46th and ending somewhere between 8/18 and 8/20. Additionally, his service in the 46th was considered state, and not Federal. Both the number of days served and his unit's muster status would prove significant in Samuel's later life.

Exiting the 46th, Samuel apparently returned to Philipsburg, choosing to forgo additional military involvement. His brief period of military service aside, details of Samuel's life are, at best, sketchy.

Samuel's whereabouts at the time of the 1870 census are not known, but likely he was still in Philipsburg as it was there he was found in 1880 employed as a laborer. By this time he had married, his wife being identified only as Amelia (no nee. b. 1862 PA). Also in the household was the couple's one child, a daughter, "Effie" aged one year.

Although most U.S. Census data for 1890 was destroyed by fire, a veteran schedule for that same year again found Samuel in Phillipsburg beset by rheumatism which had bothered him for 25 years. The following year he would begin the process of attempting to obtain a U.S. Government disability pension because of the rheumatism, the onset of which he claimed traced back to his brief period of military service. He also cited shortness of breath and stomach problems which he attributed to difficulties with his heart. A medical exam, however, disclosed no such maladies.

Samuel appears to have pursued obtainment of a pension into 1893. He ultimately wrote a letter to the government pension office pointing out he had served his country during the war and would have sacrificed his life for it. As it was, even though he had suffered with chronic diarrhea while in the military he had continued to serve, performing the duties of a soldier. Now, with rheumatism, a bad rupture as well as disease affecting is spine and kidneys he could hardly make a living he felt he deserved some government aid.

Pleas of the former private Johnston fell on deaf years. Government representatives pointed out that not only had he not served the requisite 90 days making him pension eligible, the unit in which he had served for less than one month was a state militia regiment that had never been mustered into Federal service. Case closed.

Following his unsuccessful attempt to obtain a pension Samuel again dropped from sight, ultimately resurfacing on 5/20/04 in Arlington, WA. Precisely when and why he crossed the continent to find a new home is not known, but the move undoubtedly had something to do with his older brother, William, who also lived in Arlington.

Interestingly, when the 1910 census data was released it showed Samuel, an "odd job laborer" still living in Arlington, but married to a woman identified only as Victoria (no nee b. ca. 1850 PA). She noted having borne one child who was living, so most likely had been previously married herself. What had happened to wife Amelia and child Effie is not known.

Former Civil War soldier Samuel T. Johnston died 5/27/17 in Everett, Washington's Providence Hospital. Cause of death was carcinoma (cancer) of the bladder. Accepting his birth date as 5/20/43, Mr. Johnston was 73.9 years of age when he died. Burial was in a plot provided by his brother, William, located in Everett's Evergreen Cemetery. As of this writing, what happened to Victoria following Samuel's passing is not known.