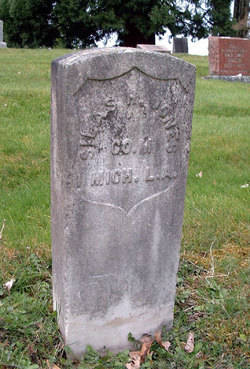 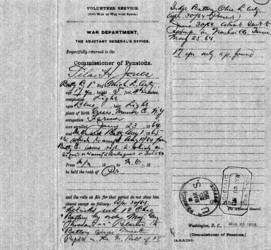 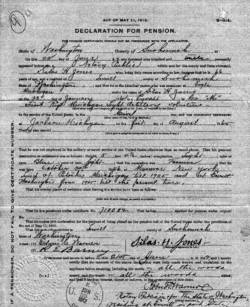 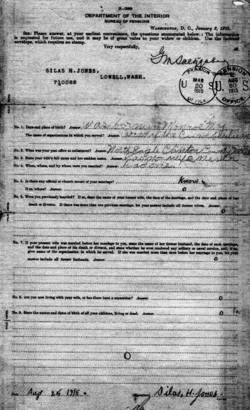 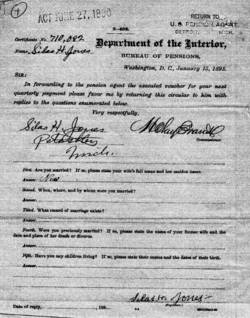 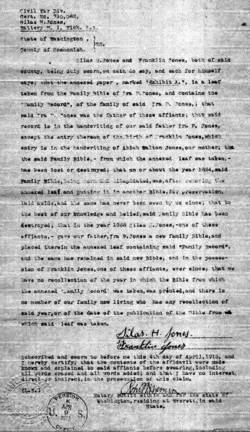 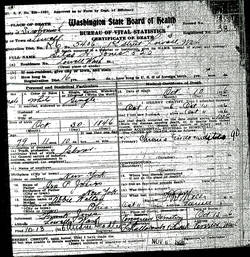 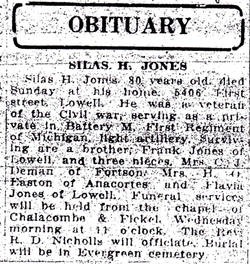 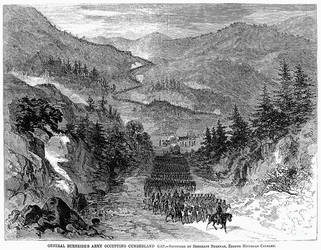 *Note: During the American Civil War companies of a regiment of infantry or cavalry generally served together as a ten-12 company unit throughout their existence. Such was not the case with the artillery. Artillery companies, known as batteries composed of four to six cannon, were assigned where ever needed within the eastern or western military theatres.

As such, an artillery regiment seldom, if ever, came together as a whole. Thus, the history of the 1st MI Light Artillery presented herein covers only those companies/batteries in which the above-noted veteran served.

Battery "E", part of the three year "western theater" 1st MI L.A., left southeast Michigan on 12/17/61. It saw first action at Shiloh/Pittsburg landing, TN in early April, 1862 and in September at Ft. Riley, also in The Volunteer State.  In December it went into garrison duty and concluded the year at Nashville.

Mid 1863 found the unit transferred to Murfreesboro, but by September it had returned to Nashville. Once there, fifty-seven men re-enlisted and were sent home on veteran furlough.

The next reported information on Co./Bat. "E" comes from mid 1864 when a "section" of the unit, probably two or three cannon, accompanied Union Gen. Rosseau on his march into Alabama and Georgia. That December the Co./Bat. helped defeat Confed. Gen. Hood's attack upon Nashville and subsequently pursued the fleeing Rebels.

In February, 1865 Co./Bat. "E" was moved from Nashville to Decatur, AL where it once again performed garrison duty. In mid year it returned to Michigan for final payment and disbandment.

Information pertaining to where and when Battery "M", part of the three year "western theater" 1st MI L.A. was organized and mustered into Federal service is not readily available.  However, it apparently left the southwestern part of Michigan on 7/9/64 and travelled to Indianapolis, IN which was the being threatened by troops under Confederate cavalry raider John Hunt Morgan.

From there, in September, it proceeded to Camp Nelson, KY and on the 24th of that month marched with a division of troops to Cumberland Gap, TN. It then took part in the East Tennessee Campaign and was constantly on the march in severe weather and over rough roads until January, 1864 when it was placed in the fortifications at Cumberland Gap.

In April, 1865 the Co./Bat. marched to Knoxville, TN and hence to Strawberry Plains. It remained there until July when it headed for Michigan and final muster.

By the time of the U.S. census of 1860 the Jones family had moved from New York to the community of Eagle in Clinton Co., Michigan. It was there (north Eagle) in 1864 the 5' 4 1/2", blue eyed farm boy joined the U.S. Army. Of note is the fact that the seventeen year old was likely able to enlist because he was accompanied by his maternal uncle, Silas Walton. The two served together throughout their military tenure.   Additionally, it appears Ira Jones, young Silas' father served in co. "F" 10th MI Infantry.

Available military service records indicate that on 4/30/64 Silas was detailed to serve a short period of time with the 18th Independent Battery, Ohio Light Artillery. By late May, however, he was in a Nashville, TN hospital with an unidentified illness. Between the detailing and the hospital stay it is not clear when he returned to the 1st.  It is clear, though, that on 8/11 both Silas and his uncle transferred from battery/co. "E" to battery/co. "M". The two remained with this unit until mustered out of service.

Separated from the military Silas returned to Michigan. The 1870 census for Watertown, Clinton County once again showed him living on a farm with his parents and brothers Richard, John, Edgar and Franklin.

In 1880 the census for Petosky, Emmit Co., WI showed Silas living in the home of brother Franklin and his wife, Cynthia. He was still with Franklin's family in 1891 when he applied for a U.S. Government pension based on his Civil War soldiering.  Ailments claimed stemmed from that soldiering included rheumatism rupture to the left side, injury to the back near his spine, short left leg, kidney problems, vertigo and "general debility." The pension request was granted as at death he was receiving a $65 monthly stipend.

1900 had Franklin's family, including Silas still in Michigan, with both Franklin and Silas employed as teamsters. However, in 1905 the clan moved west to the Washington State community of Lowell near the Puget Sound area city of Everett. Why the move was made is not documented.

In 1925, Silas, still single and living with Franklin, became ill. He died 10/4/26 at the age of 79 year, 11 months. Place of death was Franklin's Lowell home. Official cause of death was listed as "Chronic Endocardits" commonly known as inflamation of the heart. His obituary listed survivors as Franklin and three nieces.

Following Silas's passing Franklin petitioned the government to obtain financial reimbursement for expenditures during his brother's final months of life. In the request he noted that Silas needed constant care both day and night. Also, he needed "lots of medicine" which he didn't have sufficient funds to cover. The plea concluded with the notation that he was given "as nice a burial as anyone could wish to have." As no further documentation pertaining to Silas is available, likely Franklin's request fell on deaf ears.