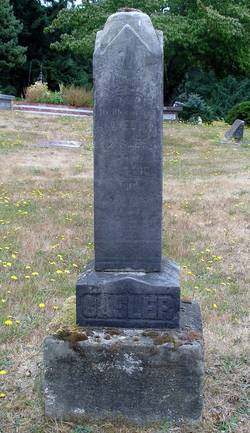 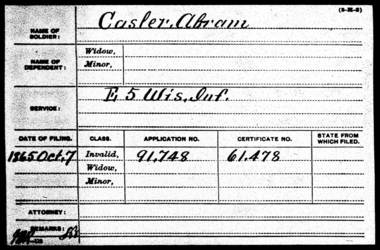 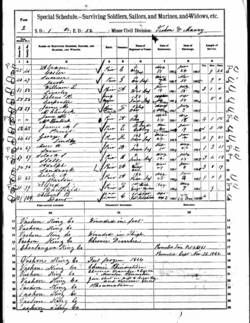 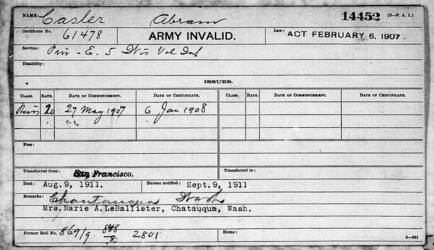 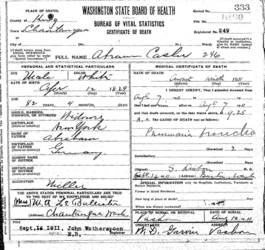 The 5th Wisconsin was a three year eastern theater infantry regiment. With the exception of a few months from August to December, 1864 its entire period of service was with the Army Of The Potomac.

Mustered into Federal service on 7/13/61, the 5th departed the state on 7/24. It then proceeded into Virginia.

1862 saw the regiment take a conspicuous part in the Battle of Williamsburg (5/5) and that summer's Peninsula Campaign. In September it saw action at Antietam, MD (9/17). It concluded the year at Fredericksburg, VA (12/11 - 15).

In the summer of 1864 the 5th was sent to the defense of Washington City during Confed. Gen. Jubal A. Early's attack on that place. Original enlistees were mustered out on 8/3/64.

In 7/64 reenlisted veterans and new recruits formed an independent battalion known as the 5th. That unit moved into Virginia's Shenandoah Valley where it saw action at Snicker's Gap (7/17), Charlestown (10/18) and Cedar Creek (10/19). A newly reorganized 5th regiment was Federally mustered on 10/1/64.

Pursuing the fleeing Rebels following their abandonment of Petersburg the 5th won accolades for their attack at SAILOR'S CREEK (4/6). Advancing through a waist deep swamp under galling fire they compelled the enemy to surrender.

Following the surrender of all Rebel forces the regiment was mustered into history on 7/11/65.

* The 5th was one of but a scant few Union regiments that lost more men in combat than it did to disease, etc.

According to his death certificate Abram A. Casler was born on 4/12/29. The location of his birth was the state of New York.

No information has been found pertaining to Abram's mother. Also absent is any indication of Abram possibly having siblings.
|

During the year 1851 Abram married. His bride was Rachel Anna Kiesey. Anna had been born July, 1819 in New York.

As best as can be determined based on available U.S. Census data, Abram and Rachel produced no children of their own. It appears, however, that they adopted at least two. More on this, later.

On 8/31/64 Abram enlisted in the U.S. Army. His unit was the 5th Wisconsin Infantry Co. E. Without accessing his military service records all we known about his period of service is that during the 4/6/65 battle of SAILOR'S CREEK, VA he received a foot wound. The wounding ended Private Casler's war.

Returning to civilian life, on 10/7/65 - likely because of his foot wound - Abram was granted a U.S. Government disability pension. Again, without his pension files, details of his initial monthly stipend are not known. By the end of May, 1907, though, the payment had grown to $20 per month.

In 1880 Abram and Rachel were farming in Freedom Outagamie County, WI. Five or so years later, during March, 1885 they are still farming, but by then on Vashon Island in King County, WT. What had drawn them to Puget Sound region of the Pacific Northwest and when they had arrived here are unknowns. Also an unknown is how they ended up on Vashon Island.

A 3/85 census for Vashon Island showed an individual identified only as M. A. (b. 1866 WI) in Abram and Rachel's home. Likely this was adopted daughter Mauea "Nettie" A. Casler. A later, 1900, census for Vashon found Nettie and her husband Fred Leballister/Lebalister under the Casler roof. The census for the Quartermaster Harbor area of Vashon in 1910 displayed a continuation of this living arrangement along with the notation that Nettie was the local post mistress.

Rachel Anna Kiesey died on 12/4/01. The location of her death was Vashon Island, WA. No details of her passing are available. She was/is buried in the Vashon Cemetery.

Turning again to the U.S. Census for 1910, in that population tally we learn of Abram and Rachel's second adopted child. He was Fredric A. Casler (b. 1887 WT); He was then living with Abram and listed his occupation as "carpenter."

Abram's final U.S. Census would be that of 1910. He died in the Chautauqua area of Vashon Island on 8/9/11. The cause of his passing was bronchial pneumonia. At the time of his death he was eighty two years and three months old.