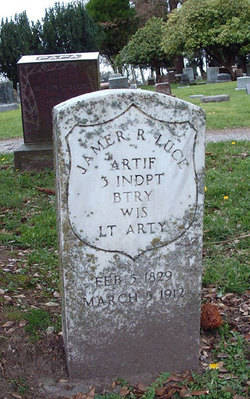 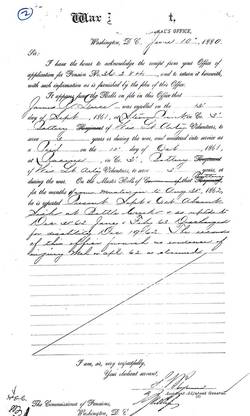 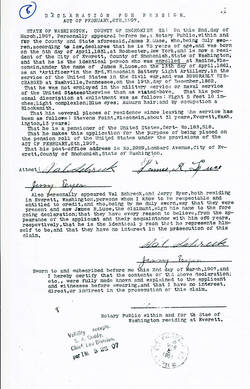 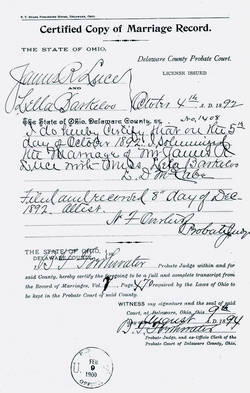 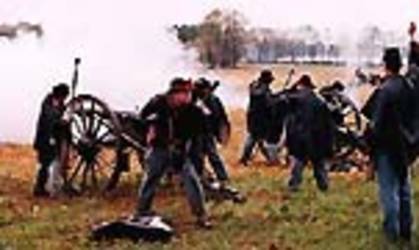 Known as the “Badger Artillery” this 3 year, 170 man, western theater battery left the state 1/27/62 for Louisville, KY where it was armed with six rifled 32 pound cannons.  On 4/3, after camping at Nashville, TN the 3rd joined Union Gen. U.S. Grant and moved to Pittsburgh Landing.

During the ensuing summer the unit was on the march through MS, AL, TN, and KY.  1862 ended with the action at Stone’s River, TN.  Life was relatively quiet for the 3rd during the first half of 1863, but on 9/19-20 during the battle of Chicamauga, GA the battery was overrun by the enemy and driven from the field losing 5 of its guns, 33 horses and 26 men.

1864 found the unit performing guard and garrison duty in Chattanooga, TN.  In the spring of ’65 it was transferred to Murfreesboro then, in mid year to Wisconsin for final muster.

While there is no information available pertaining to James’ childhood, formative and teenaged years, by the early 1850’s when in his twenties he apparently married a woman identified only as Esther (b. ca. 1834).  Esther, as James, was born in NY, so perhaps the two met there, married and then moved westward to Portage Co., WI where they settled and started a family.

Because of his vocation was blacksmithing, a highly sought-after skill in the horse and mule powered armies of the 1860s, James quickly rose from the rank of private to “Full Artificer,” an artillery regiment specialist, usually a blacksmith, who repaired wood and iron parts of artillery carriages while campaigning.  The word “quickly” is significant because James’ military career proved to be relatively short.

By 9/21 he was hospitalized with chronic diarrhea which proved untreatable to the point where, on 12/19/62 he was granted a medical discharge.  Likely it was lingering effects from the ailment which in later years lead to his receiving a U.S. Government invalid pension that, at death, amounted to $20 per month.

Army life behind him, James returned to Wisconsin, his wife and family, and continued to sire children.  Post military additions to the Luce household included Estella (b. ca. 1864), Louis (b. ca. 1872) and Henry (b. ca. 1875).  It appears that sometime after 1880 James and Esther divorced.  (In 1910 she was living with son Henry in Everett, WA.)

On 10/5/92 in Delaware, OH he remarried to Lella B. Barkeloo (b. ca. 1826).  The couple then settled in Stevens Point, Wisconsin.  James and Lella produced no children.

Circa 1894 James left Stevens Point, and also apparently Lella, (In 1900 she was listed as living in a Wisconsin Veterans’ home.) and moved to the Puget Sound area of Washington.  Why the move was made is not documented, but once there he established a saw manufacturing and repair business.  In late 1909 he sold the business and its property and retired.

In the 1910 census James reported that he was a widower.  However, as is often the case with vital statistics from a century ago, they tend to be less than perfect.  As such, it is not surprising that when, on 3/15/12 at the age of 84.1 years, James died; his obituary noted he left behind “a wife, four sons, two daughters and two brothers.”  The “wife” reference remains puzzling.