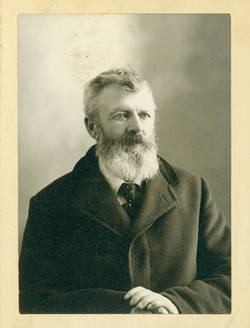 The 20th, a three month, eastern theater state (militia) infantry regiment was recruited in New York State's Greene and Ulster counties. Informally known as the "Ulster Guard" on 4/23/61 it was ordered to Washington, D.C. On 5/3/61 the order was revoked because the unit was already in New York City in-route to Washington.

On 5/7/61 the 20th was finally permitted to proceed to Washington City. From there it moved into  Maryland. In that state it served at Annapolis and Baltimore, MD until 8/2/61 when it was mustered out.

Upon returning to New York, many members of the 20th volunteered to serve for three years. This resulted in the regiment being reorganized as the 80th New York Volunteer Infantry.

The 51st New York was a three year infantry regiment. It saw action in both the western and the eastern theaters of The War.

Leaving the state at the end of October, 1861 the regiment sailed to North Carolina. There, it saw its first combat action on Roanoke Island (2/7 - 8/62). The battle of New Berne (3/14) followed. During the latter engagement the 51st lost seventy one killed and wounded. That was the highest casualty rate of any Union unit fielded that day.

Mid, 1862 saw the 51st move northward into Virginia. During August and September it saw action at Kelly's Ford, Sulphur Springs, Second Bull Run (8/28 - 30) and Chantilly (9/1). The regiment loss during this campaign period was eighty nine killed, wounded and missing.

Combat at South Mountain (9/14) and Antietam, MD (9/17) followed. At the latter place the 51st lost eighty seven killed and wounded during the storming of the stone Bridge.

In 1863 the 51st moved into Mississippi and Tennessee. The year ended with a large proportion of the command reenlisting as veteran volunteers. Furloughs home followed.

May, 1864 found the 51st active in Union Gen. U.S. Grant's Overland Campaign. Losses to the regiment during the first two days of the battle the Wilderness were seventy nine. Within the terrible month that followed the regiment moved to Petersburg, VA. During the remainder of the year it participated in every major action before that besieged city. Those engagements included Peeble's Farm where (9/30) the regiment was surrounded and three hundred thirty two of its members captured.

1865. Still in front of Petersburg, the 51st participated in the final (4/2) assault upon that city's fortifications. Final muster was held on 7/25/65 in Alexandria, VA.

* The 51st was one of but a few Civil War regiments that lost more men in combat than it did from other causes.

The U.S.S. North Carolina was initially commissioned in 1824 as a 74-gun ship of the line in the U.S. Navy. During her time she was considered by many to be the most powerful naval vessel then afloat. By the advent of the American Civil War, however, she had been relegated to the role of a moored receiving ship (a floating rendezvous center for new recruits) in the New York Navy Yard.

The vessel that became the U.S.S. Fuchsia was one of three steam tugs constructed for the Chinese government. Launched in 1863 as the Kiang Soo, she and her sister vessels were not delivered to China.  Instead they were re-sold to the U.S. Navy which renamed them. Thus, Kiang Soo became the Fuchsia.

With its relatively shallow draft, Fuchsia became part of the Potomac River Flotilla. That squadron of vessels performed patrol duties looking for Confederate shipping and other Rebel activities on the Potomac, Rappahannock, Pianatank, Tappahannock, Corotoman and St. Mary's rivers.

NOTE: The birth - to - death biographical profile of Simon Terwilliger was created in February, 2021 during the Covid-19 medical pandemic. It contains less depth of detail than many other biographies within this website because military service, pension and other veteran-related files housed in Washington, D.C.'s National Archives were not available. At a later time those documents may be obtained and the data contained therein added to the narrative which follows._

Simon Terwilliger was born April 6, 1838. His birthplace was in Sullivan County, New York.

Seeing that John and his wife both were born and died in New York, it is likely that was the birth state of all of their children. In 1850 and 1860 the family's address was Mamakating located in Sullivan County.

As best as can be determined from available documentation, Simon married in 1861. His bride was Lucretia H. A. Rouse. Lucretia had been born in New York circa 1840/'41. The marriage would be the first and last for both.

Exactly when, during 1861, Simon and Lucretia married is not known, but when civil war swept across American in April of that year Simon almost immediately left home to serve his country in the first of three enlistments. Without access to private, then seaman Terwilliger's military  records there is not much we can say about his periods of service other than he survived all three - albeit he exited one because of some type of physical disability - and returned to civilian life.

Private Terwilliger's first enlistment was for three months in the infantry. Returning from that period of duty, he almost immediately re-enlisted for three more years in another infantry regiment. He was discharged from that unit for disability on February 23, 1863.  Later that same year, perhaps drawing upon his earlier work as a boatman, he joined the U.S. Navy.  He served in the navy until sometime in 1864.

During his period of naval service between 1863 and 1864 Simon was stationed on two vessels. The first was dockside on the receiving ship U.S.S. North Carolina. While aboard the North Carolina his assignment was "coal heaver." This duty likely meant feeding coal to the stationary vessel's heating system.

Simon's second vessel was the U.S.S. Fuchsia. As part of the Potomac Flotilla Fuchsia patrolled that river as well as nearby coastal waters and other rivers seeking out enemy incursions and activities.

Exactly where "home" was located when Simon exited the U.S. Navy we don't really know, but when the next U.S. Census came around in 1870 he, his wife and young son, Clark, were residing with a family surnamed Miller in his old hometown of Mamakating Sullivan County, NY. Simon's occupation at that time was "nail maker."

Dropping back a bit, revisiting the births of Simon and Lucretia's children one notes that by the time the couple's third child, Albert, was born in 1873 the Terwilligers had quitted New York and were residing in Iowa. In 1880 their community of residence was Portland Plymouth County, IA. In Iowa Simon listed his occupation as "farmer."

There is no U.S. Census information on the Terwilligers for 1890 because most of that tally was destroyed by fire. According to another source, however, by 1889 the family was living in Seattle King County, WA. What had drawn them to the Puget Sound region of the Pacific Northwest and exactly when they had arrived here are unknowns.

Referring to a Seattle City Directory published around 1890 it appears the Terwilligers’ first residence in the area may have been a house located on the northwest corner of South 12th Avenue and Town Street. During this period Simon listed his occupation as brick layer. .

As of 1899/1900 Simon, Lucretia and adult daughter Martha were residing at 508 10th Avenue South in Seattle's Ward #3. Available documents note that during this period Simon operated a fruit stand located at the foot of Main Street in downtown Seattle.

*In 1901 Simon applied for residence in the Washington State Old Soldiers' Home located in Orting Pierce County, WA. The basis for the application was lameness as well as lumbago back problems and neuroses. According to a physician’s report these conditions rendered him able to perform but 50% of the manual labor as could a healthy adult male of his age. An unknown is whether Simon or and Lucretia, ever entered the facility for by 1910 the two, along with son Samuel were living in Seattle in that city's Ward #12.

From 1910 to 1917 the Terwilliger’s Seattle address was noted as 5102 Farrar St. No occupation is noted, so by then Simon was likely retired.

Former Civil War soldier/sailor, retired laborer and fruit stand operator Simon Terwilliger died on 11/9/17 in Seattle King County, WA. Cause of the 79.6 year old's death was a cerebral hemorrhage (stroke) with senility contributing. Burial was on 11/11/17 in Seattle's Grand Army Of The Republic (G.A.R.) Cemetery located near the north end of that city's Capitol Hill.

On 7/20/90 Simon had initiated the application process to receive a U.S. Government disability pension based on ailments or other physical handicaps which he traced back to his Civil War service days. It appears that his request was not accepted until 4/15/07. Then, he was granted a $12 per month stipend. By 4/340/13 that payment had grown from $12 through $15 and $25. At the time of his death  he was receiving $30 per month.

After Simon's passing Lucretia petitioned U.S. government to continue receiving at least a portion of her late husband's pension stipend. That request was granted on 12/17/17, but without accessing her pension files, details of the payment size is an unknown.

Lucretia remained in Seattle the remainder of her life. Under the widow's roof - likely at 5102 Farrar - in 1920 was her forty nine year old son, Samuel and forty five year old daughter, Martha.

* Simon's name does not appear on the American Civil War Research Database roster for the 20th NY.

** The American Civil War Research Database shows name with this regiment as Simson Terwilliger. Other sources show the first name as Simeon.

***Navy. Without accessing Simon's U. S. Navy service records we know only when he entered that arm of the U.S. military. Unknowns are when he changed ship assignments and his mustering out/discharge dates.

Buried at Grand Army of the Republic Cemetery Seattle
Site: 294