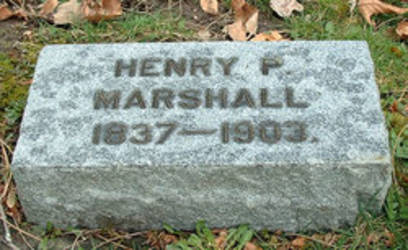 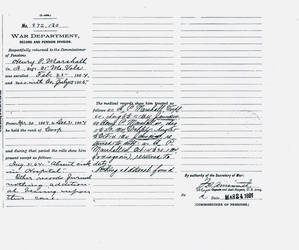 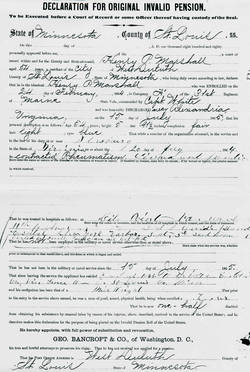 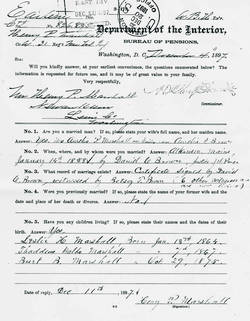 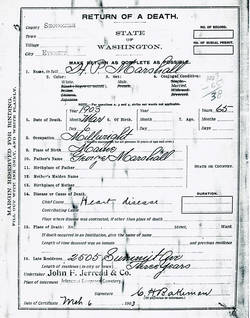 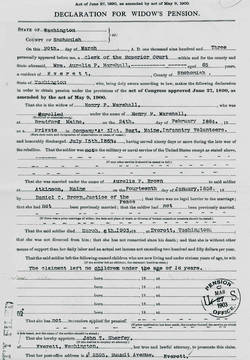 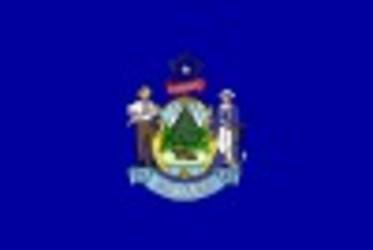 The 31st, a three-year "eastern theatre", regiment had a somewhat unique formation history.  Firstly, it was a new, long term field unit organized “from scratch” at a time late in the war when, mostly, it was established regiments that were being fielded having been drawn from garrison/fort/railroad guard duty.   Secondly, during the waning months of the war most new recruits were filtered into existing field regiments rather than forming a new organization such as the 31st. That the 31st defied the prevailing trend was evidenced by the fact that, although the unit left the state on 4/16/64 bound for Alexandria, VA, its final composition was not completed until later that same year when, in October, two companies of unassigned infantry that had enlisted for one year became company L and company M and, in mid December, troops recruited to become the 32nd Maine were consolidated into the 31st.

Arriving in war-ravaged Virginia, the 31st was allowed no time to "enjoy" the idylls of army life. It was immediately marched to Bristoe Station where it took part in the concluding scenes of that engagement.  Almost immediately thereafter, in early May, the regiment dove into the battle of the Wilderness where it lost heavily in killed and wounded. From that point until the close of the war it saw almost continuous service in battles such as Spotsylvania Ct. House, Cold Harbor, Petersburg, Weldon Railroad, Poplar Spring Church, Hatcher's Run and Bethesda Church. Because of being so constantly engaged, casualties within the 31st during the second half of 1864 were enormous.

During the winter of 1864/65 the 31st garrisoned forts in North Carolina and Texas.  Then, on 2/11/65 it was ordered into Virginia to a point near Parke Station on the Army Line & City Point RR where it remained until 4/2 when it joined the final assault on the Confederates' Petersburg fortifications. There the regiment suffered severely.

The following day the 31st participated in pursuing the enemy westward toward Appomattox Ct. House where Confed.  Gen. R. E. Lee surrendered his Army of Northern Virginia on 4/9/65.  The fighting war was over for the 31st.

Henry P. Marshall was born circa 1835/'36. Most likely it was the latter year in the month of May.  Then again, his death certificate would indicate his birth year was 1838. Whatever the year, the exact date of his entering this world is not known. One thing that is known, however, is that his birthplace was in the state of Maine.

The name of Henry’s father was George. His mother's name is not known.  The future Civil War soldier’s birth family has not been located in either the 1840 or 1850 U.S. census. As such, Information on Henry’s childhood, formative or teenaged years cannot be given.

Henry joined the U.S. Army in February, 1864. Based on his date of enrollment he likely received a fairly substantial enlistment bonus or "bounty." After entering the service as a private, a short time later, on 4/30, he was promoted to the rank of corporal.

Around July 20, while on duty in the siege trenches around Petersburg, VA Corporal Marshall was stricken with rheumatism, diarrhea and jaundice. He was initially treated at the regimental hospital, but the seriousness of his ailments prompted a move to a hospital at City Point and, in August, to another at David's Island, NY. Apparently getting no better, in September he was sent home to recuperate under the care of his family physician.  Corporal Marshall subsequently returned to duty between October 14th and the 20th, 1864 and, although no reason is documented, at year's end, relinquished that rank to once again become a private.  Perhaps the relinquishment was prompted by inability to fulfill the obligations of corporal rank because of his extended illnesses/absence.

Exactly where Henry rejoined his family in Wisconsin after the War is not documented. However, by 1870 the Marshall's were in West Eau Claire where Henry's occupation was listed as "jeweler." A decade later, still in Eau Claire, he was characterized as a "millwright."

The family remained in Wisconsin until 10/29/79 when they removed to West Duluth, St. Louis County, MN. Their next move was in 1898 when they headed west to Lewis, County, WA.  Why this extended move westward was made is not noted in available documents.  The 1900 census listed Henry and Aurelia living in Newaukum, Lewis County. That census noted that of their five children, only three were living.

The Marshall's stay in Lewis County was apparently short-lived because it appears Henry and Aurelia moved northward to Everett, Snohomish County, WA sometime in the latter half of 1900. Again, why the move was made is not documented.

Henry P. Marshall died in Everett on 3/6/03. Cause of death was listed as heart disease.  Henry's death certificate logged his age as 65 years. At his passing he was receiving an $8 monthly pension stipend based on ailments tracing back to his time of Civil War soldiering.

Following her husband's death Aurelia applied for a portion of Henry's pension. The request was granted as, at the time of her passing on 3/19/15, she was receiving a $12 monthly stipend. Arrangements for her burial next to Henry in Everett’s Evergreen Cemetery were handled by son Leslie of Prosser, WA.