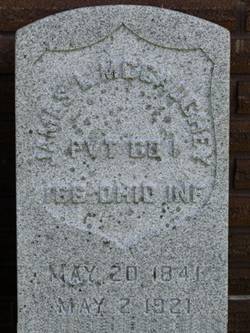 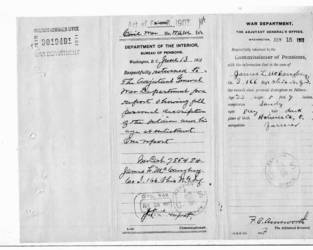 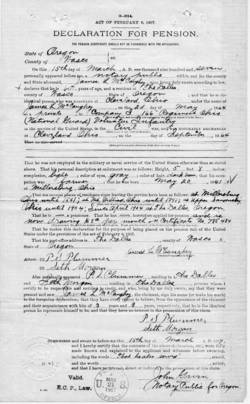 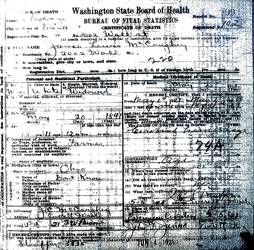 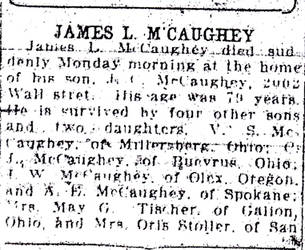 * NOTE: In the spring of 1864 Union Gen. U.S. Grant began his Overland Campaign southward through Virginia. Ultimately, this campaign would bring an end to four years of bloody fighting.  Stripping most northern forts and garrisons of troops to join the southern trek, short-term regiments were raised to fill the non- combatant, behind-the-lines void created by "seasoned", but departing forces.  The 166th Ohio was such a unit.

The 166th was a 100 day "eastern theater" regiment. It was made up of the 63rd regt. Ohio Natl. Guard of Huron County, the 59th Batln. from Holmes county, the 79th Battln. from Medina County, and one company of the 52nd Battln. of Wayne County.

Immediately after Federal muster the 166th proceeded to Virginia where it was placed on duty at Fts. Richardson, Barnard, Reynolds, Ward and North, all of which were part of the defensive perimeter of Washington, D.C.  Regimental headquarters was at Ft. Richardson. It returned to Ohio and was mustered out in early September.

The 5' 7" or 8", sandy complexioned, gray eyed, dark haired James apparently worked on the family farm until the spring of 1864 when he and older brother William entered the U.S. Army. Likely both were members of a local National Guard unit.  The two served and were mustered out together in September of the same year.

No significant illness or injury apparently befell James during his period of service, but in later years he would apply for and after initial rejection, be granted a U.S. Government pension based on continuing bouts of malarial poisoning and resulting serious pain in one leg along the sciatic nerve, problems which he traced to contracting malaria during the Civil War. At death his monthly stipend amounted to $50 per month, a princely sum for the time.

The 1870 U.S. Census placed James and family on a farm in Hardy, Holmes County, Ohio; likely not far from the family farm which brother William was then running. James' family was in the same location a decade later, but the following year removed to another Ohio community.

Although the census records for 1890 were mostly destroyed by fire, the McCaughey's can be documented in '91 as having moved to”upper" Sandusky, OH. What happened to them during the following nine years is not known beyond the fact that at some time and place Mary died.

James is next  found in the  1900 census in Marseilles, Wyandot Co., OH living alone as a widower without an income, but  by1904 he had moved to The Dalles, OR. Most likely the westward move was in search of fresh farmland. He is next located in l920, still a widower, residing in the Snohomish County, WA community of Port Susan in the home of youngest son Albert and family.

James Lewis McCaughey died 5/2/21 at the home of son Jacob located at 2002 Wall St. in Everett, WA. Cause of his sudden passing was noted as cerebral hemorrhage. At death, the former Civil War soldier, buried shortly thereafter in Everett's Evergreen Cemetery, was only days shy of his 80th birthday.

James was survived by four sons and two daughters. Jacob, when settling his father's estate wrote the Federal Government in the belief that additional pension monies were due beyond his father's final 3/4/21 payment. No documentation is available pertaining to the request, but likely it fell on deaf ears. So ends the story of another Civil War veteran.