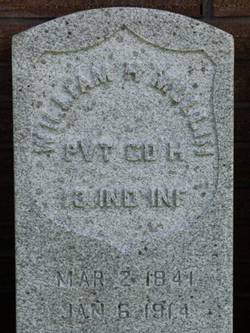 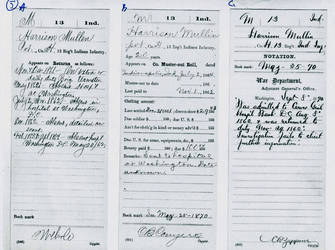 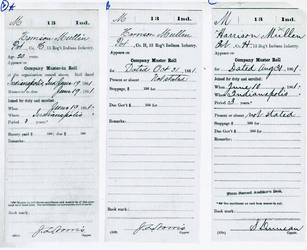 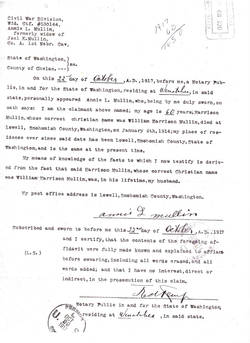 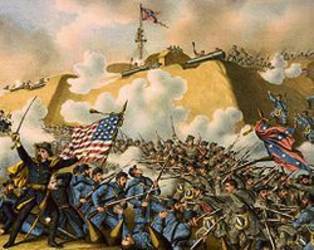 The 13th was originally accepted for one year of "state militia" service, but the soldiers themselves helped place it under the Federal umbrella. It thus became one of the first four regiments from Indiana to take the three year plunge. It subsequently served those years first, in the eastern theater, then the west and finished the War in the east once again.

Perusing the combat history of the 13th one is struck by the fact that while the regiment saw action in numerous locations during its three years, the names of most are not commonly known to the casual student of the American Civil War.

The regiment left Indiana on 7/4/61 and joined Union Gen. George B. McClellan's forces in western VA participating in the battle of Rich Mountain the following day. Conflicts at Cheat Mtn., Green Brier and Camp Alleghany completed the year.

In the spring of 1862 the 13th moved into the outskirts of Virginia's Shenandoah Valley, fought the battle of Winchester Heights and pursued Confed. Gen. T. J. Jackson’s forces southward. At the end of June it moved from The Valley to Harrison's Landing on the VA peninsula where it remained until August as Union Gen. George B. McClellan abandoned his Peninsula Campaign. A move to Suffolk followed. The 13th was to remain there throughout the winter of '62/'63.

Still at Suffolk in the spring of 1863, the 13th aided in the defeat of Confed. Gen. James Longstreet's troops as they attempted to capture that piedmont city. In mid year the regiment joined an expedition that sailed for the harbor of Charleston, SC. Once there the regiment took part in the siege operations against Forts Wagner and Gregg, being the first regiment to enter Ft. Wagner in the failed assault of 9/7. At year's end part of the unit re-enlisted and was furloughed home for 30 days.

1864. In February the 13th moved to Jacksonville, FL. It remained there until mid April when it returned north to Glouster Point, VA. During the months ahead the regiment participated in most of the operations of Union Gen. Benjamin Butler on the Bermuda Hundred peninsula south of Richmond. Engagements on The Hundred included Port Walthal Junction, Chester Station. The 13th lost nearly 200 men in these actions. Removed from Butler's command and attached to that of Union Gen. U.S. Grant, the regiment fought at Cold Harbor on 6/1 and then moved southward to Petersburg where they took part in the early assaults on the works of that city. It next took part in the disastrous Union assault at "The Crater" then remained in the trenches until taking part in the battles of Strawberry Plains, Chaffin's Bluff, Ft. Gilmore and the October attack upon Richmond.  November saw the 13th moved to New York City during the November presidential election. Lincoln re-elected, the 13th finished the year by joining the first expedition against Ft. Fisher, NC located on an outlets known as Pleasure Island.

As 1865 dawned, the 13th, with the loss of departing veterans, was re-organized into a five company battalion. Five companies of drafted men shortly brought the unit up to regimental strength. That incarnation of the 13th then assaulted Ft. Fisher, captured Ft. Anderson and helped occupy Wilmington. Stations at Raleigh and Goldsboro preceded September's final muster.

The first documental data on William is from the U.S. Census for 1860. That survey noted him residing in Marion County, IN. At the time he was living and working as a laborer on the farm of sixty-two year old Elizabeth Harding.

The next information on William comes from June, 1861 when he enlisted in the U.S. Army. On the same date and location his older brother Samuel Lemuel/Lemuel Samuel joined the same regiment and company. The two reportedly served together until being discharged in 1864, but the U.S. Government would, in William's case, later contest this.

The only available notation of significance pertaining to private Mullin/Mullen’s period of service (his surname would appear as both spellings while in the service and later) is that from April, 1862 until late November of the same year he was hospitalized, part of the time in Carver General Hospital, Washington, D.C., for what was characterized as "debilities."

If one accepts the belief that William and his brother were mustered out of Federal service on 7/1/64 in Indianapolis, IN, then all is well with William's life. However, as we shall see, such may not have been the case.

Where William settled immediately after leaving the military is not known. However, he was likely in Indiana as that was where the 1870 census placed him, working in a mill in the community of MIddle, in Hendricks Co. At the time he was living with 22 year old Hugh Mullen also a mill worker. How Hugh may have been related to William is not known.

As far as can be determined, between 1880 and 1900 William was residing in Indiana, for a time near Toll Gate in Hendricks County. At the time of the 1900 census he was with James and Mary McGlaughlin for whom he worked as a farm laborer. The McLaughlin farm was located in or near the Hendricks county community of Washington.

In 1898,  at the age of 58, William petitioned  the U.S. Government for a disability pension based on ailments which he traced back to his period of Civil War soldiering. Specifically, he noted a head injury and rheumatism. The petition was rejected because the war department claimed his certificate of discharge was fraudulent. They claimed that, in fact, he had not been honorably discharged from the army, but had deserted. The same decision would be rendered in 1902 and the following year.

By 1903 William was in Snohomish County, located in western Washington. When and why he moved there is not documented, but once there his life took an interesting turn. On 10/16, he married Anna L. "Annie" Mullen/Mullin (nee Perkins b. 1857 MO or unk. yr. KY). In 1886 Annie had married William's older brother Joel who had honorably served during The Rebellion with both the 1st Nebraska Infantry and 1st Nebraska Cavalry. Joel died 8/6/00 after which Annie was granted an $8 per month government pension because she was the widow of a Civil War veteran.

In Washington, William and Annie may have initially settled in the farming community of Lowell on the southeast edge of the City of Everett, WA.  By 1904, however, they might have been in Everett proper.

In October of ’04 William, claiming he was disabled by old age and hard labor petitioned anew for a government pension. Once again his petition was rejected with the notation to the effect that his certificate of discharge was a fake and so long as this state of affairs continued he would receive no pension.

The census for 1910 placed William and Anna in Lowell once more. Interestingly, while she noted she had been twice married, so did he…….From here forward trying to chronicle William’s life becomes both confusing and interesting!!

In 1913 Annie claimed her second husband, William, died on December 6th of that same year.   At the same time she claimed he had not been an "old soldier" and wanted her earlier pension - which she had lost when she remarried - back, because she needed the money.

According to available documentation, William did not die in December of 1913, but on 1/6 or 1/8 of 1914 from unknown causes. Whatever his Civil War record may have been, at the time of death he was an accepted member of the Everett G.A.R. Post. Internment was in Everett's Evergreen Cemetery.

In 1917 Annie was still residing in Lowell, WA, but on 8/22 of that year appeared before a notary public in the eastern Washington, Chelan County community of Wenatchee claiming that she was the widow of Joel K. Mullin. Annie was apparently still trying to get her pension re-instated.

1920. The census for that year found the widow Annie Mullin continuing to live in Lowell, WA. With her at the time was her brother William, a widower. Neither had any claimed income.  Information on Annie's passing and her place of burial is not known.