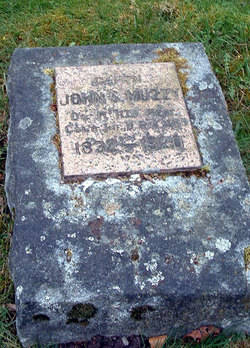 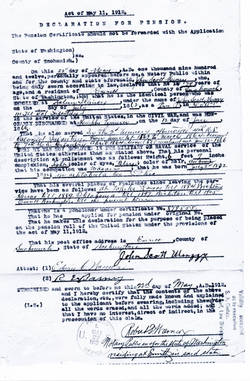 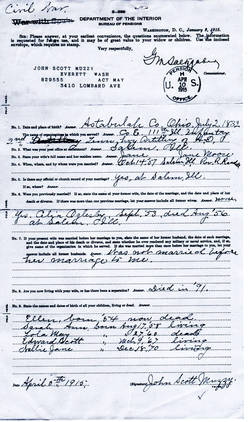 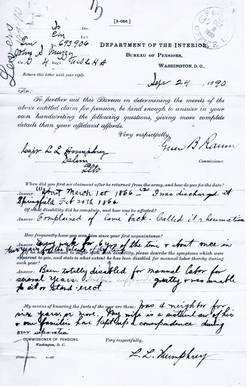 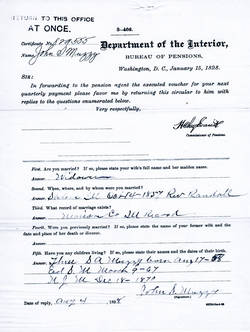 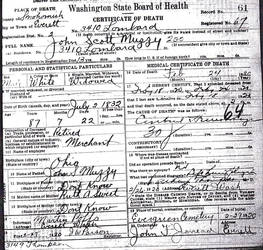 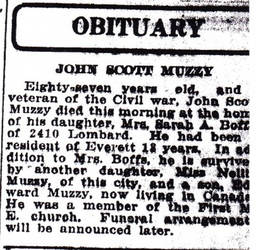 This three year "western theater" regiment was recruited from the Illinois counties of Marion, Clay, Washington, Clinton and Wayne counties. It remained in Illinois until 10/312/62 when it received orders to report to Cairo, IL which it reached via the march and by rail. From there it embarked on river transports for Columbus, KY. It was afterwards stationed at Ft. Heiman, KY from which it made frequent raids into the countryside capturing enemy property and prisoners.

In the fall of 1863 the 111th was transferred from Kentucky to Alabama. It was there on 11/5 it had its first skirmish with Rebel forces, thereby losing 2 wounded and 5 missing.

May, 1864 the unit entered Union Gen. W.T. Sherman's Atlanta, GA campaign. Skirmishing preceded their participation in the battle Resaca where 14 perished and 36 were wounded. At Kennesaw Mountain 6/27/64 it lost 3 killed and 18 wounded. On 7/22 The actions before the City of Atlanta claimed another 20 killed, 45 wounded and 80 missing. The regiment was then engaged in actions around west Atlanta and Jonesboro before marching to the sea where, before Savannah, at Ft. McAllister, it lost another 5 killed and 15 wounded.

February, 1865 found Sherman's armies tramping northward from Georgia through the Carolinas. The 11th skirmished with the enemy at the North and South Edisto rivers and, later, was involved in the Battle of Bentonville.

After the surrender of Confederate forces under Joseph E. Johnston the regiment marched to Washington, D.C. where, on 5/23-24/65 it participated in the Grand Review of the Union armies then went into camp near the city awaiting final muster.

The 2nd Tennessee Heavy Artillery (African Descent) existed from June, 1863 through August, 1864.  Throughout its brief tenure it remained within the Department of the Tennessee.  Although no written history exists for the unit, its batteries undoubtable garrisoned rear echelon fortifications.

The 3rd USCT HA, a western theater heavy artillery unit, was organized from the 1st Tennessee Heavy Artillery (African Descent). Tagged the 3rd on 3/11/64, on 4/26/64 it was re-designated the 4th.

Assignment/Service Locations: Garrison at Ft. Pickering, TN, and in Defenses of Memphis, Tennessee. Same in District of West Tennessee until mustered out of service.

During its period service assignments for the 4th included Garrison duty at Ft. Halleck, Columbus, KY until June, 1865, Union City Tennessee to September 2, 1864 and near Ft. Donnelson, Tennessee until 10/11/64.
In June, 1865 the 4th moved to Pine Bluff, Arkansas. It remained there until February, 1866 when it was mustered out of existence.

Losses from combat, disease and/or accidents are not known.

The 7th, a three year "western theater" organization was created from the 1st Alabama Siege Artillery (African Descent). On 3/11/64 it was designated the 6th Heavy Artillery, but on 4/26 that designation was upped to the 7th.

The unit was attached to the District of Memphis, Department of Tennessee to June, 1864 then to the Memphis District of West Tennessee to January, 1865. During this latter month and year the regiment became the 11th Regiment U.S. Colored Troops (New).

Service assignments: Garrison duty at For Pickering and in defenses of Memphis until January, 1865. Companies "A", "B", "C" and "D" garrison duty at Ft. Pillow, TN where they were stationed during the "massacre" of 4/12/64. Additional service included skirmishing at Pulaski, GA on 5/18/64 and Holly Springs, MS on 8/28/64

The 11th (new) was organized from the 7th U.S. Colored Heavy Artillery on 1/23/65. It was attached to Post and Defenses of Memphis, District of Tennessee to July, then the 2nd Infantry Brigade, District of West Tennessee to September or that year. It was then with the Department of Tennessee until final muster.

Service assignments: Duty at Memphis, TN, and in the Dist. of West Tennessee, Department of the Tennessee until 1/12/66 final muster.
No regimental loss numbers are available.

Birth location for John was Ashtabula, Ashtabula County, Ohio.  His parents were John S. (b. 1805 NY) and Ruth A. (no nee b. 1809) Muzzy or Mussey. The elder John Scott was, at least one point, a "merchant." The only other information available pertaining to young John's (from here-on referred to only as John) biological family is that he likely had at least one younger sibling, a brother named Thomas (b. 1848). No information is documented pertaining to John's childhood, formative or teenaged years.

On September 19, 1853 John married Cecelia Oglesby. The marriage produced one child, daughter Ellen (b. 1/12/54) before Cecelia's death in August, 1856. Her passing was in Salem, Illinois.

In August, 1862, with his native America embroiled in a bloody civil war, John enlisted in the U.S. Army infantry.  Around thirty years of age, he was slightly older than the average Civil War combatant. His other vital statistics were as follows: 5'9" in height, fair complexioned, blue eyes, and auburn hair. In 1860 his occupation had been listed as "merchant", but at enlistment his job calling was noted simply as "mason."

John Scott Muzzy's military tenure would prove to be interesting, if not downright amazing!! His enrollment as a private in 111th  Illinois Volunteer Infantry would prove relatively undistinguished, notable only because of a stint of detached service at Ft. Heiman, KY,  a thirty day furlough in May, 1863, the notation of "good conduct as a soldier " and his inter-regimental transfer from company "E" to company A".  Beyond the 11th, however, his service became extraordinary.

By 1863 African Americans were being called upon to help defeat the southern rebellion.  With "colored" regiments being created, initial officer staffing of these units was by whites.   In this vein Private J.S. Muzzy applied for and was granted a commission as a 2nd Lieutenant in one of these newly constituted United States Colored Troops regiments. This was an exceedingly amazing feat for a humble private soldier from Illinois.

Lieutenant Muzzy's travels through units of U.S. Colored Troops is somewhat difficult to follow. It appears his initial assignment was in a heavy artillery unit serving in forts around Memphis, TN. Through reorganizations, his assigned unit progressed through a number of numerical identities and arm-of-service designations.

All progressed well for Lieutenant Muzzy until 2/20/65 when, during a unit inspection he would not or could not "give the simplest commands correctly." Whether or not this was because of lack of ability - which seems highly unlikely since he had passed the rigorously thorough examination process to move from the rank of private soldier to that of lieutenant within a colored unit- or he had some personal "beef" with the examining captain, is not clearly delineated in surviving documents.  However, what is clear is that lieutenant Muzzy was brought up before a court martial board and "honorably" dismissed from the service.  The word "honorably" is important because he soon received another commission at the higher rank of 1st Lieutenant.  He would retain this ranking until leaving the military in 1866.

In some ways John Muzzy's post-war civilian movements were (and are) as unclear as was his military career.  In 1869 the Muzzy family departed Illinois for Topeka, Shawnee County, Kansas.  That was where the census for 1870 found them with John plying his plastering trade. In later years John would claim the family remained in Topeka from '69 to 1884, but the census for 1880 shows differently as it placed the Muzzys back in Salem, Marion County, IL. While in Topeka John was reportedly initially employed as a plasterer and, later, a grocer.

1884. Apparently sometime during this calendar year the Muzzys did move. If one accepts that they remained in Illinois until then, that year they removed from Illinois back to Kansas, this time settling in the community of Wichita.  Again, if he was employed, John was a plasterer or a grocer.

If available documentation is to be believed, the Muzzys remained in Wichita, KS until 1889 when - at some time within that calendar year - they removed anew, this time to Oklahoma. However, with no census data available for 1890 it is difficult to confirm this transition.

In 1891 Jane, the second Mrs. John Scott Muzzy, died.  Cause/causes of her passing and the location are not known. Both may, however, have been in Oklahoma if one accepts the date of the family's next move which was in 1897 when they reportedly left Oklahoma and returned to Wichita, Kansas. It was there the 1900 census found widower Muzzy - a fruit grocer - with daughters Sarah and Nellie in his  household

The next move for John, Sarah and Nellie was sometime between 1905 and 1907 when they resettled in the Puget Sound Snohomish County city of Everett, Snohomish County, Washington.  Exactly when - as well as why - the jump to the Pacific Northwest was made is not documented. Also, while the 1910 census places the trio in Everett, it gives no indication of what John's occupation was at the time.

Another decade. 1920 found John, Sarah and Nellie still in Everett.  By this time, Sarah was married to one Martin J Poffs, an Irish-born longshoreman.

John Scott Muzzy, former Civil War private soldier and commissioned officer, died on 2/24/20 while with his daughter and family at 3410 Lombard. The cause of his passing is not documented. The old soldier was buried in Everett's Evergreen Cemetery. Surviving him was married daughter Sarah, unmarried daughter Nellie of Everett as well as son Edward then residing in Canada.