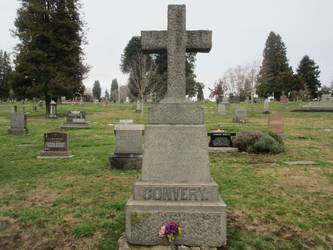 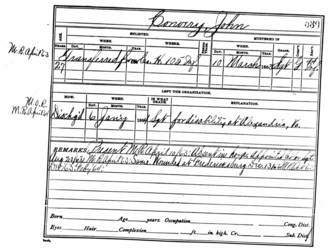 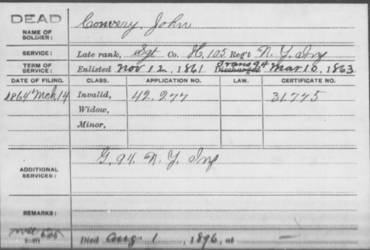 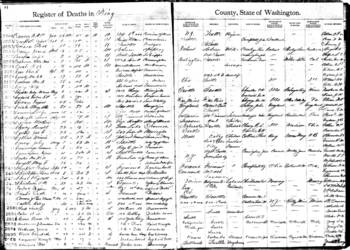 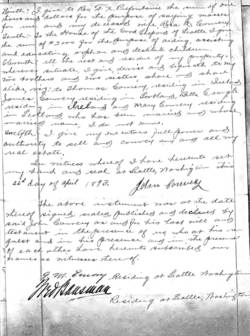 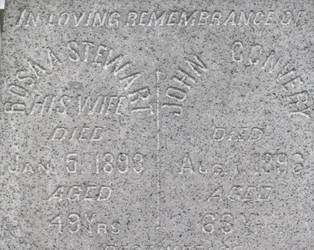 The 105th - also known as the “LeRoy” or” Rochester Regiment” - was a three year infantry unit. Its entire service tenure was within the eastern theater of the American Civil War (ACW).

Recruitment of the 105th was primarily from the counties of Cattaraugus, Genesee, Monroe and Niagara. The regiment was organized on 3/15/1862 when men recruited in Rochester were consolidated with those recruited in LeRoy.

On 4/4/1862 the 105th departed its home state for Washington, D.C. From there it moved into Virginia where it saw its first action at the battle of Cedar Mountain (8/9). Regimental losses were eight wounded.

Almost immediately following Cedar Mountain the 105th entered into Union Gen. Pope's Virginia campaign which included  the second battle of Bull Run/Manassas (8/28 - 8/30). During this campaign losses to the regiment were eighty nine killed, wounded and missing.

The 94th, also known as the "Bell Rifles", was a three year infantry regiment recruited from within Jefferson County, NY. Its term of existence was spent in the eastern theater of the American Civil War (ACW).

Leaving New York State on 3/18/1862, the 94th travelled to Washington, D.C. It then served in the defenses of Washington City until June when it joined Union Gen. Pope's Virginia campaign. During those movements and actions it lost one hundred forty seven killed, wounded and missing.

The Winter of 1862/'63 was spent in camp near Falmouth, VA. Then, during March, 1863 the 94th was consolidated into a five company battalion to which five companies of the former 105th NY Infantry were added.

On 8/10/1864 the 94th was infused with more new blood, this time by men of the 87th New York Infantry. The reconstituted unit then remained at Petersburg until the end of the siege of that place (4/2/1865.) It concluded The War at Five Forks and was present at Appomattox Court House for the surrender of Confed. Gen. R.E. Lee and the Army Of Northern Virginia.

After Lee's surrender the 94th returned to Washington, D.C. There, it was mustered into the history books on 5/18/1865.

This military reserve organization was initially established in April, 1863 as the Invalid Corps. Dislike of that designation resulted in the name being changed to the Veterans Reserve Corps (VRC).

The IC/VRC was created to make suitable use in military or semi-military duties of soldiers who had been rendered unfit for active field service on account of wounds or disease contracted in the line of duty, but who were still fit for garrison or other light duty assignments thus freeing able-bodied soldiers to serve on the front lines.

Originally, the IC/VRC soldiers had to be, not only disabled, but in the opinion of their commanding officers, meritorious and deserving.  However as The War dragged on, it was proved that additions to the Corps hardly equaled the losses by discharge or other means. As a result it was ordered that men who had had two years of honorable service in the Union Army or Marines could enlist without regard to disability, etc.

The Invalid Corps/Veterans' Reserve Corps was composed of both regiments and battalions. As of this writing, no history of the 2nd Battalion VRC has been found.

John Convery was born in Ireland. Birth years range between 1834 and 1836. As no specific year, month or date has been located in available documents so, herein we are adopting 1835.

Both of John's parents were born in Ireland.  Nothing additional is known regarding either.

In terms of siblings, it appears John had at least two brothers and two sisters. They were named in his will. In 1893 brothers Thomas and James were then living in Ireland. One sister, Mary, was then in Scotland while the   second, Bella, was in Ireland.

Finally, other last great unknowns are when John came to America. Also, if he immigrated here with others, whom they were.

John's unit was the 105th New York Infantry. Within that organization he was a member of Company "H." He entered the 105th at the rank of private, but on 3/25/1862 was promoted to sergeant. The sergeant rank didn't last long, however, as on 4/3/1862 he was - for whatever reason - reduced back to being a private. The reduction lasted until 6/12/1862 when his sergeant's status was reinstated. Then on 8/20/1862 he was honored by being appointed his company's color sergeant.

There is documentation of Sergeant Convery’s becoming wounded at Fredericksburg, VA during actions at that place on 12/13/1862. If so, the wounding was initially considered to no be too serious as our sergeant continued with his duties into 1863 when the 105th was merged into the 94th New York Infantry. From that point until 1/1864 Sergeant Convery served with the 94th NY.

While with the 94th it appears Sergeant Convery's   old wound/wounds came to a point of disabling him. As of April, 10, 1863 he was muster rolled as being absent in the hospital. The hospitalization appears to have been lengthy and, as of 1/1864, garnered him a disability discharge.

From the 94th Sergeant entered the Veteran Reserve Corps. Exactly when this transpired is unclear.

Other unknowns are how long Sergeant Convery spent in the VRC and the nature of his duties in that organization. As for the former it may not have been long as on 3/13/1864 he applied for and was granted a U.S. Government disability pension. The receipt of such a pension while The War was still raging would seem to point to a rather serious injury. Further, the March dating indicates that by that date he had exited the military. Accessing John’s military service records would help to answer these and other questions associated with this veteran’s soldiery service.

After 1864 there is a huge information gap in John Convery's life line. We next encounter him in the U.S. Census of 1880. At the time of that tally he was residing in Seattle King County, Washington Territory (WT), married and employed as a carpenter/joiner.

We know very little about John's bride.  Her first name was Rosa and her middle initial was H. No maiden surname has not been located in available documents. She had been born in Canada during 1845 of Scottish parentage.

When Rosa had immigrated to American and how, where and when she and John had met are unknowns.  During their time together John and Rosa produced no children.

Both John and Rosa lived out their lives in Seattle. Rosa died there on 1/5/1893. The cause of her passing at the age of forty seven or forty eight is not known. She was/is buried in that city's Calvary (Catholic) Cemetery.

After his wife's death John remained in Seattle. He died there on 8/1/1896. The Seattle Post-Intelligencer newspaper for Sunday 8/2/1892 noted his passing as follows:

John Convery, one of Seattle's oldest and best known citizens died suddenly at his home at Sixth Avenue and Pike Street last night, of heart disease. Mr. Convery was a member of Stevens Post No. 1, G.A.R. and his death will come as a surprise to many who saw him apparently in the best of health only a few hours before his death was announced. Mr. Convery attended the game of ball in the afternoon between the railroad men of this city and on his return home complained of feeling somewhat ill. Dr. Eames was sent for, and while attending to his patient Mr. Convery, who was sitting up talking, fell forward dead. The deceased was a devout Catholic, and was a widower, his wife having died about two years ago. It is likely that the funeral or a portion of the ceremony will be conducted by the G.A.R. post of this city among the members of which he was very popular.

After the death of his wife, perhaps sensing his own mortality, on 4/22/1893 John had created his last will and testament. Unlike many of his elderly comrades, John Convery was not a destitute or poor man. He bequeathed his property and monies to his two brothers and two sisters, the executors of his estate and the Roman Catholic Church.