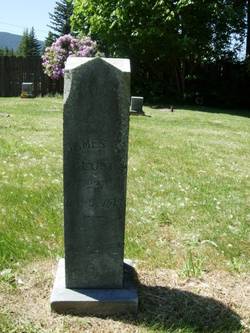 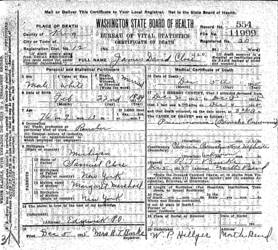 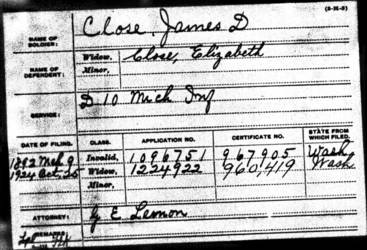 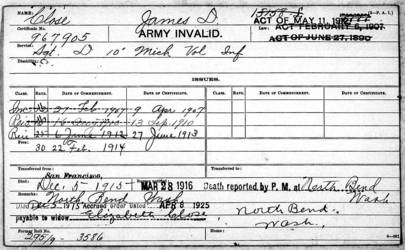 The 10th was a three year, western theater infantry regiment. It left the state on 4/22/62 and moved to Shiloh/Pittsburg Landing, TN. A great battle had been fought there earlier (4/6 - 4/7) in the month. From there the unit then moved to Corinth, MS which had been abandoned by the Confederates.

In September, 1862 the 10th settled into Nashville, TN. Duties at that location included building fortifications, guarding trains and reconnaissance. During this period the regiment suffered severely on account of a shortage of rations.

During the winter of '62/'63 the unit was constantly on duty and made many long marches. Although it had frequent contacts with the enemy it fought no major battles.  Losses were minimal.

September, 1863 found the 10th in Bridgeport, AL. It then crossed the Tennessee River near Chattanooga and moved to Chickamauga, GA. That fall it was constantly in motion.

In February, 1864 the regiment veteranized. The men were then looking forward to being furloughed home for thirty days, but instead were ordered to Buzzard's Roost, GA. During fighting at that place the 10th lost sixty five killed, wounded and missing. The following month the re-enlisted survivors did go home on furlough.

Returning to the field in March, 1864 the 10th joined Union Gen. W.T. Sherman's campaign to capture Atlanta, GA. Marching by way of Dalton and Kennesaw Mountain the regiment crossed the Chattahoochee River and aided in the siege of Atlanta. After the capture of that city (7/24) it participated in the "march to the sea."

1865. In January the 10th began marching northward through the Carolinas. It fought the battle of Bentonville, NC (3/19), then marched to Raleigh and on to Goldsboro.

Confederate forces having surrendered in late April, 1865, on 5/10 the 10th moved to Washington, D.C. There, it took part in the 5/24 Grand Review. Final muster and disbandment occurred in July and August.

James David Close was born 2/22/39. The location of his birth was Greenville Montcalm County, MI.

Parents of James were Samuel Close (b. NY) and Margaret (nee Marshall b. NY) Close. Available documents do not identify Samuel's occupation.

As best as can be determined, based on available U.S. Census data James had at least two siblings. One was an older sister named Jane (b. ca. 1833). The other was a younger brother named John (b. ca. 1841).

Beyond his birth, the only pre-American Civil War information available on James comes from the 1860 U.S. Census. That year he was residing in Lexington Sanilac County, MI with a Mr. John Johnson and another man. No occupation is given for James.

On 2/6/62 while still residing in Lexington, MI James enlisted in the U.S. Army Infantry. His regiment was the 10th Michigan.

Although James' military service records are not available at the time of this writing we do know that his army experience was a positive one. He enlisted for three years then re-enlisted as a veteran volunteer when that duty period expired. Further, he entered the military at the rank of private, but rose to sergeant and, then, on 6/7/65, second lieutenant. Finally, he survived The War and returned to life as a civilian.

Where James settled post-war is not known. In 1870, however, he was living in Fairplain Montcalm County, MI and working as a laborer on the farm of one Mr. Richard Miller. Also under Miller's roof were James' sister, Jane, and his brother, John.

By 1880 James had departed Michigan and moved westward. He was then residing in Humboldt County, CA. What had drawn him and when he had arrived there are unknowns.

James married during 1883.  His bride was Elizabeth Cristie Melirlie. Elizabeth had been born on 11/22/64 in Ontario, Canada. She came to the U.S. in 1881. Where, when and how she and James had met are unknowns.

As noted by the birth states of the Close children, at some point in time between 1880 and 1885 James moved his family from California to the Dakota Territory. There, on 6/1/85, he was farming in Buffalo which is located in Cass County of what is now South Dakota. By March, 1892, however, he, his wife and children had moved westward to Washington Territory.

In 1900 the Close family was farming in the Puget Sound region of Washington State. Their community of residence was Fall City located in eastern King County. Again, what had drawn the family to this area and exactly when they arrived here are unknowns.

On 3/9/92 after moving to Washington Territory James had applied for and was granted a U.S. Government disability pension based on his days of Civil War soldiering. Without accessing his pension files, exactly when the policy was established and details of his monthly stipend are not known. By the time of his death, however, it appears James was receiving a thirty dollar per month payment.

Almost immediately after James died Elizabeth petitioned the government to continue receiving at least a portion of the pension stipend. That petition was granted, but once again, without her pension files her stipend details are unknown.

Following her husband's passing Elizabeth remained in the Puget Sound region for a time. In 1920 her community of residence was Tanner, an unincorporated area of eastern in King County.  Under her roof at that time were her sons James, Lloyd and John as well as a three year old grandson.

A decade later, in 1930, Elizabeth was living in Ketchikan Alaska Territory. In her home was son Lloyd and the now-thirteen year old grandson.

Elizabeth Close died on 7/23/37 in Creosate (an area of) Bainbridge Island Kitsap County, WA. She was/is buried in the Mt. Si cemetery with James.