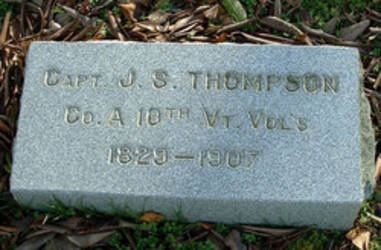 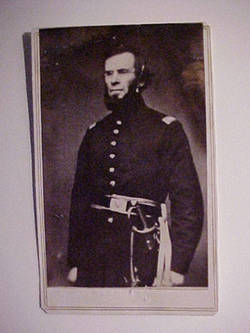 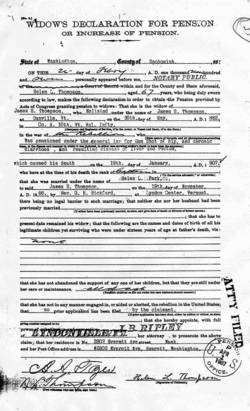 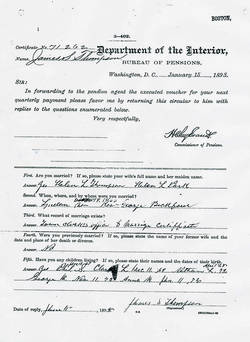 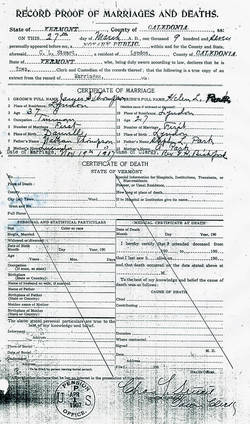 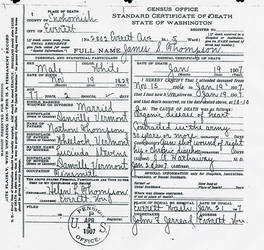 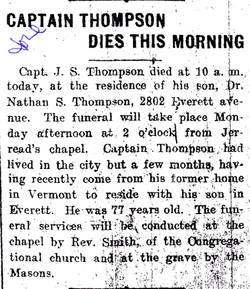 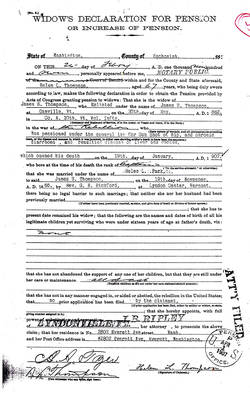 Recruited from throughout the state, this 3 year "eastern theater" regiment left VT six days following Federal muster. Three days later it was encamped at Camp Chase near Arlington Heights, VA across the Potomac River from Washington City. From there the unit was locally dispersed to guard river fords in defense of Washington.
That October regimental camp was moved to the Potomac River mouth of Seneca Creek. This campsite, a low marshy area, was described as one of "fever and death." Guard and picket duties continued. Despite scares, there were no encounters with the enemy.

In late June, 1863 the 10th was ordered to Harper's Ferry, VA where it joined the Army of the Potomac under Union Gen. George B. McClellan. The regiment's first engagement with Rebel forces which rose to the "dignity of a battle" was the 11/27 action at Locust, or Orange Grove, VA. There the unit performed well during a gallant charge that cost 13 killed and 57 wounded. Thus ended the regiment's combat actions for 1863.

May, 1864 found the 10th in The Wilderness of Virginia as Union Lieut. Gen. U.S. Grant began his Overland Campaign which would ultimately bring an end to four years of bloody fighting. There, by the end of the first day's fighting, the regiment had lost a dozen men killed or wounded. During the bloody struggle that followed around Spotsylvania Ct. House, the movements near the North and South Anna Rivers, Hanover Ct. House and Totopotomoy Creek the regiment was constantly on the march and/or engaged with the enemy. Next came the 6/6-6/12 Federal bloodbath at Cold Harbor. Referring to this series of actions one regimental history noted, in part: During the twelve days at Cold Harbor the 10th suffered more than it had in all of its previous engagements of this campaign. Captains Frost and Darrah, Lieutenants Stetson and Newton were killed. Colonel Henry, Captains Blodgett and Hunt were severely wounded and LIEUTENANT THOMPSON WAS TAKEN PRISONER.

When Gen. Grant moved his army further southward across the James River towards Petersburg, the 10th was sent to Bermuda Hundred to join Union Gen. Benjamin Butler. With nothing accomplished there, the regiment was returned to Gen. Grant and participated in the actions which resulted in the investment (siege) of Petersburg before on 7/6 it, and the whole of the 3rd Division, was ordered northward to successfully defend Washington City from an attack by Confederate forces under Confed. Gen. Jubal A. Early.

After aiding in the defense of Washington, instead of returning to Petersburg the 10th moved into Virginia's Shenandoah Valley under command of Union Gen. Philip H. Sheridan. Major valley actions which resulted in sweeping Confederate forces from the "Breadbasket of the South" included the 3rd battle of Winchester (9/19), the battle of Fisher's Hill (9/22) and the battle of Cedar Creek (10/19). In December the regiment returned to the Petersburg lines.

The first three months of 1865 produced little except long stretches of picket duty for the 10th However, on 3/25 the regiment assisted in the defense of Ft. Stedman helping to drive back the Rebels as they attempted to break the Federal stranglehold on Petersburg. On 4/2 when that city fell to Federal forces, the 10th claimed its colors were the first of its division to be planted upon the enemy's fortified lines. During additional days of marching and fighting that preceded Confed. Gen. R.E. Lee's 4/9 surrender of the Army of Northern Virginia at Appomattox Ct. House, the regiment was continuously active.

On 6/22, the War over, 14 officers and 136 men of the 10th were transferred to the 5th Vermont. Shortly thereafter the remainder of the regiment was mustered out of Federal service and into the annals of history.

James S. Thompson was born 11/19/29 in Danville, Vermont to Nathan Thompson (b. CT) and Lucinda (nee Stevens b. Wheelock, VT) Thompson. Beyond that information, his origins appear to be lost in the mists of time as nothing further can be found on James until May, 1862 when the 33 year old tinsmith enlisted in the U.S. Army.

At enlistment James was older than the 26.7 year old average age for a Civil War combatant. Perhaps that's why he entered the service as a sergeant rather than a private. Whatever the reason for the entry level, his rankings only wet up from there.

On 1/19/63 James left the ranks of enlisted men when he was commissioned as a second lieutenant. He is next heard from on 6/1/64 when, during the bloody Federal assault on Confederate positions at Cold Harbor, VA, Lieutenant Thompson was taken prisoner. On 11/2, while still a prisoner of war, and likely unbeknownst to him, he was promoted to 1st Lieutenant. On 12/13 Lieutenant Thompson escaped his captivity. No details are available pertaining to that feat.

On 3/22/65 1st Lieutenant Thompson was again promoted, this time to a captaincy. This raise in rank likely prompted his transfer from company "A" to company "H".

Shortly after his promotion, on 4/2/65, during what was the Federal breakthrough of the Confederate's Petersburg defenses, Captain Thompson received a gunshot wound to his right arm. The seriousness of this wound is not known, but he continued to serve with his unit until mustered out of service in June.

The 1880 U.S. Census placed the Thompson family in Lyndon where James was still a tinsmith. The census for 1890 was largely destroyed by fire, so their whereabouts is not exactly known. 1900 also is silent about the Thompsons.

In 1906 James and Helen removed, probably from Lyndon, to Everett, WA to live with son Nathanial, then a medical doctor. It was in Nathan's home located at 2808 Everett Avenue that Captain James Thompson died on 1/19/07. Cause of death was noted as organic disease of the heart contracted in the army during the Civil War with a gunshot wound to the right hip and chronic diarrhea having contributed to disease of the liver and rectum. At death James was 77 .2 years of age. Burial was in Everett’s Evergreen Cemetery.

Following James' death Helen remained in Everett. Documentation indicates that at some point, likely in the early 1890s, James had petitioned the U.S. Government for a disability pension based on illnesses and ailments traced back to his soldiering days. Although a monthly dollar amount is not known, the request was apparently granted as after James's passing Helen requested to continue receiving a portion of that pension. It is not known if that request was granted, but likely it was.

The Everett census for 1920 showed Helen as the head of a household that also included her daughter, Anna. Helen died on 10/29/28 and was buried beside James. Thompson children and other family members are also buried in the plot.