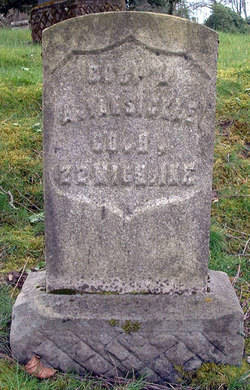 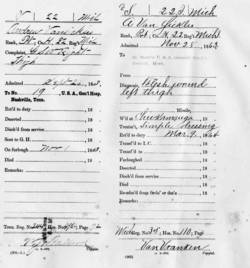 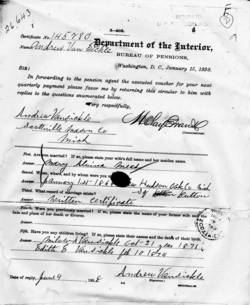 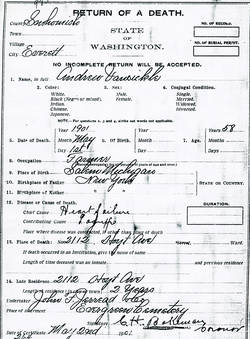 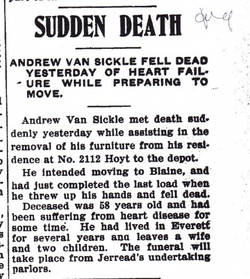 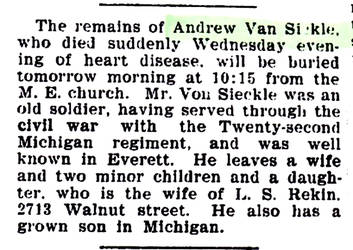 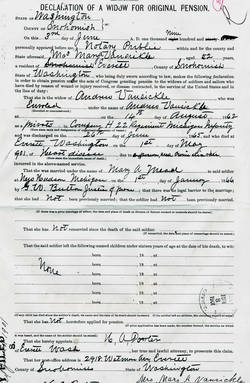 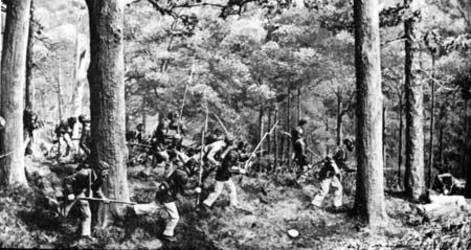 The 22nd, a three year "western theatre" regiment left Michigan on 9/4/62 and moved via Ohio into Kentucky where it immediately formed into line of battle at Covington to repel a purported attack by forces under the command of Confed. Gen. Kirby Smith. Company "H" was sent forward as skirmishers without one round of ammunition!! The action that never happened was, later, laughingly dubbed "The Battle of Cabbage Hill" because the battle line was formed on a knoll which contained a cabbage patch.  During the months ahead the 22nd tramped back and forth across Kentucky participating in various minor incidents thereby gaining the nickname "The Marching Regiment."

Early 1863 found the 22nd in camp at Lexington, KY. There they learned the awful truth that enemy bullets are not a soldier's only enemy.  Months of picket duty in open fields without shelter or warmth brought sickness and death which sent scores to the local hospital and cemetery.  A brush with John Hunt Morgan's cavalry preceded an early April move to Nashville and, thence, to Chattanooga, TN. From there the regiment quickly moved to Alabama and into Georgia where it grappled with the enemy during the second day of a bloody contest along Chickamauga Creek. That night the portion of the 22nd that had entered the fray in the morning, out of ammunition, but still holding the position it had been ordered to defend at all costs was, with its colours, captured. Some of those soldiers later died of starvation and exposure in southern prison camps.

Falling back from Chickamauga remnants of the 22nd moved into Chattanooga, TN where it, along with other Union forces were encircled and placed under siege by Rebel forces.  For the next several months the regiment literally starved before the siege was lifted by successful Federal attacks on Lookout Mtn. and Missionary Ridge. The road into Georgia and the City of Atlanta now lay open.

On the morning of 9/4/64 the regiment marched into Atlanta with "light hearts, colors flying and bands playing." Provost (military police) and guard duties in Chattanooga, TN preceded final muster in Nashville and the return trip to Detroit, MI for final payment and discharge.

During the summer of 1862 the eighteen or nineteen year old Andrew enlisted in the U.S. infantry. Company reports from early 1863 listed him sick in hospital, while those for September reported him wounded in the right thigh during the battle of Chickamauga, GA. Although only a flesh wound requiring a simple dressing, the injury resulted in his admittance to two hospitals, the first in Nashville and his remaining off duty until early March, l864. After his return, on 5/17 he was promoted to corporal, a rank which he maintained until leaving the military in late June, 1865.

Census data for 1890 is not available, most of it having been destroyed by fire, but it appears the Vansickles remained in Mason County as it was from there in 1898 that Andrew applied for and was granted a U.S. Government pension. Granting of the stipend was apparently grounded on heart problems and chronic diarrhea stemming from exposure to the elements during his Civil War service.

Moving ahead two years, the 1900 census did not reflect Andrew and family, but the Everett, WA city directory for that year listed Andrew, a carpenter, living there. Although the "why" for the Van Sickles moved westward is not documented, perhaps it was prompted by urgings from their married daughter to leave Michigan for the milder climes of Puget Sound country.

Sadly, Andrew's time in the Pacific Northwest was limited. On 5/1)01, after loading the last of the family's household furniture pursuant to a move northward to the Whatcomb County community of Blaine, the 58 year old former Civil War infantryman "threw up his hands and fell dead." Heart disease had taken its toll.

Andrew's obituary noted he was survived by his wife, of Everett, a married daughter, also of that city, and one adult son in Michigan. At death he was receiving a $12 per month government pension stipend. Burial was in Everett’s Evergreen Cemetery.

In 1902, in Snohomish County, Mary remarried to Samuel L. Caton. Details pertaining to her later life and ultimate passing are not available.