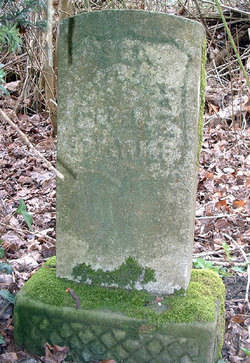 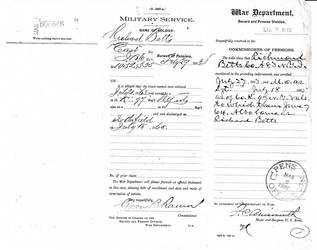 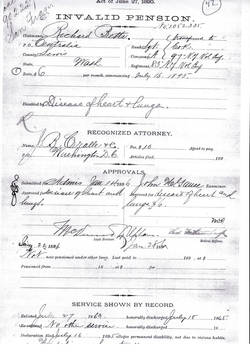 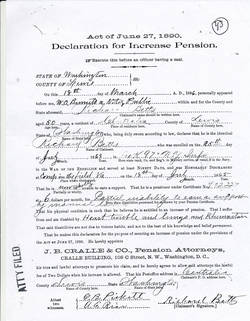 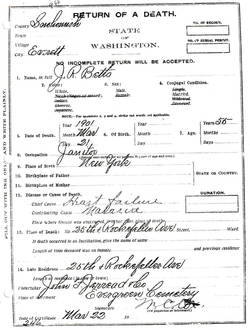 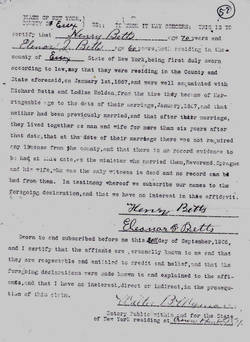 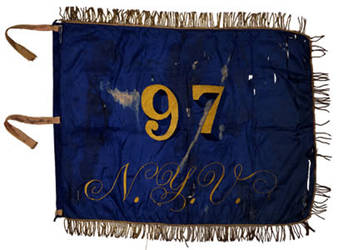 
The 83rd (the 9th militia), a three year "eastern theater" regiment left New York state for Washington City on 5/27/61 and thereafter was stationed along the Potomac River and at Harper's Ferry, VA for the remainder of the year.

Spring, 1862 found the regiment stationed near Warrenton Junction, VA and along the Rappahannock River where it performed several different assignments. In late August, during the battle of Second Bull Run/Manassas it suffered the loss of seventy-five members. The following month the regiment fought at South Mtn. and Antietam, MD where an additional 114 men were lost. Completing that year's combat the 83rd was engaged at Fredericksburg, VA losing an additional 125 killed, wounded and missing.

After passing the winter of 1862/'63 at Falmouth, VA, the 83rd was in an exposed position during movements surrounding and the early May battle of Chancellorsville, VA. At Gettysburg, PA, in July, the regiment played an important role in the capture of Iverson's North Carolina brigade. The Mine Run campaign concluded that year's actions.

May, 1864. In The Wilderness the 83rd lost its colonel and 128 additional men killed, wounded and missing during the opening act of Union Gen. U.S. Grant's overland campaign. Expiring enlistments saved the regiment from more of the slaughter that accompanied the Federal southward movement that would ultimately bring an end to four years of bloody strife.

With the mustering out of those of the 83rd not re-enlisting, in late June, '64 the regiment’s remaining veterans were transferred to the 87th New York Infantry.

The 83rd's battlefield losses, 164 by death from wounds and 91 other causes earned it a place in Fox's list of the "three hundred fighting regiments."

The 97th, a three year "eastern theater" regiment also known as the "Conklin Rifles was recruited in New York State counties of Oneida and Herkimer. It left New York for Washington City on 3/12/62 and remained there until May when it moved into Virginia occupying various posts in the neighborhood of the Rappahannock River. It was first engaged with the enemy during the battle of Cedar Mtn. 8/9/62 where it lost 111 killed, wounded and missing.

September of '62 found the regiment in action at South Mountain and Antietam, MD, In the latter battle it suffered 24 killed, 74 wounded and nine missing - the most severe loss in any battle during its period of service. It was also prominently engaged at Fredericksburg, VA in December of that year.

1863. The regiment's first major was in early July, when it marched to Gettysburg, Pa and distinguished itself by the brilliantly executed capture of 382 prisoners and the colors of the 20th North Carolina Infantry. Southward movement and participation in the Mine Run Campaign concluded that year's combat.

In May, 1864 the regiment received new members from the 26th NY and in June, 1864 it was joined by veterans and recruits from the 83rd NY Infantry. In August more new faces were gained from the 94th.

During Union Gen. U.S. Grant's overland campaign into Virginia which commenced in May, 1864 the 97th suffered severe losses in the Wilderness, at Spotsylvania and near the Weldon Railroad.  It was also engaged at the North Anna River, Totopotomy Creek, Cold Harbor, White Oak Swamp and before Petersburg. Its combat career concluded during the Appomattox Campaign which ended with the surrender of Confed. Gen. R.E. Lee's Army of Northern Virginia on 4/9/65.

Regimental losses: 112 by death from wounds; 157 by death from accident or diseases. Of the latter group, 54 perished in captivity.

Private Betts proved to be a capable soldier as on 9/15/64 after his regiment, the 83rd NY Infantry, had been transferred into the 97th NY Infantry, he was promoted to the rank of corporal and, on 4/1/65 to the rank of sergeant. While in the military he was never wounded and suffered only from a bout of acute diarrhea for which he was treated on 3/7/64 and an unidentified burn for which required treatment from 4/28 to 5/1/64.
Departing the service Richard apparently returned to Crown Point, Essex County, NY where he appears to have gained employment as a (common) laborer.

As evidenced by the birthplaces of the Betts Children, Richard and family remained in New York except for an indeterminate period in the 1870s when they may have resided in Vermont. Documentation definitely indicates, however, that in November of 1878 the Betts family departed Crown Point, New York to move westward. Following this move the 1880 U.S. census found the family living in Clintonville, Waupaca Co., WI with Richard listed as being a farmer.

While no census data is available for the year 1890, somewhere between 1888 and 1889 the Betts clan moved further westward, this time settling in or near western Washington Territory/State community of Centralia in Lewis County. Within the next two to three years his list of physical ailments were further complicated by the onset of stomach disease. This appears to have been the motivating factor in former Civil War soldier Richard Betts applying for a U.S. Government disability pension.

Between the years of 1892 and 1894 Richard underwent a series of medical examinations in an effort to prove is inability to perform manual labor because of heart problems causing shortness of breath and "general debility." Initially, these claims were rejected, but in 1895 a report noted that he had a heart that was at least one half greater in size than it should be, thus resulting in palpitations and extreme weakness thereby preventing his performing normal labor duties. On 7/16/95 a monthly pension stipend of $6 was initiated.

Over the next several years Richard attempted to have his pension's monthly dollar amount increased due to continuing heart and lung disease, rheumatism, asthma and general age debility. Again, on each occasion his request was rejected. Finally, on 12/15/99 it is documented that a doctor had told him that he could not do manual labor and he must move to a different climate or he didn't have long to live.

With apparently no money available except his pension Richard and family remained in Centralia, at least until 1900 when he moved northward to the City of Everett located in Snohomish County, WA. Why that move was made is not known, but it was definitely not the radical "climate change" urged by his physician. In Everett Richard obtained employment as a school janitor.

Richmond "Richard" Betts died from heart failure and malaria in Everett on 3/22/01. At death he was just inside fifty-five years of age. Burial was at Everett's Evergreen Cemetery.

In November, 1901, 53 year old Lodisa petitioned the U.S. Government to keep receiving her late husband's pension. The request was granted. In early 1902 her monthly stipend was $10 per month.

In 1906 an auditor's research disclosed Richard and Lodisa never owned any property. Additionally, she was no longer able to perform manual labor. This resulted in her admission to some kind of financial aid program in January of 1907. At that time her address was noted as 4114 Oak Avenue, Everett.  Shortly thereafter she received a lump sum payment of $540.

Lodisa's whereabouts are not known at the time of the 1910 census, but in 1920 she was residing in the northwestern Washington, Whatcom County city of Bellingham with son Charles. It is not known if she was still living there in 1926 when she went blind.

By 1930 Lodisa was residing in the King County, Washington City of Seattle's Ballard district. At that time she was in the home of Clarence T. and Gladys Macomber who characterized her as their "aunt-in-law." Seven years later she was apparently still with the Macombers, residing in the same area, but at a different address. Her monthly pension allowance at the time was $40 per month.

In January, 1938 one John Frash, of Grandview, WA, having just returned from a visit to Seattle, wrote the U.S. Pension office seeking an increase in Lodisa’s monthly stipend noting that she was now past 90 years of age, totally blind and hard of hearing. Additionally, over the previous two years she had begun to lose her mind, making it even more difficult for the Macombers, who had "very little means" of their own, to provide for her medicinal and care needs. The government response was: Request rejected. As Lodisa had not married her Civil War soldier husband until after the war, she was receiving the maximum payment allowed.

1940. That year the U.S. Census noted Lodisa residing at yet a third address in the Ballard area of Seattle. Likely, she was still with the Macombers.  Lodisa Betts died on 1/25/41. She was buried in Everett’s Evergreen Cemetery, but interestingly, not next to her husband.