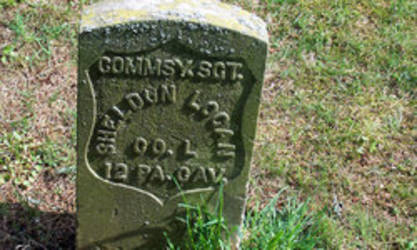 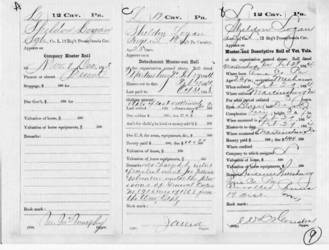 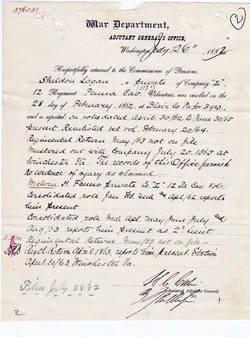 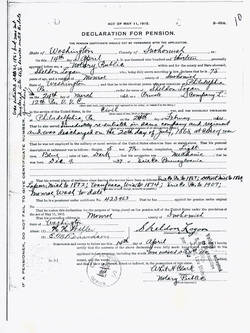 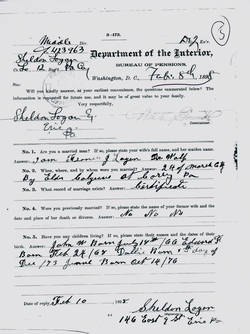 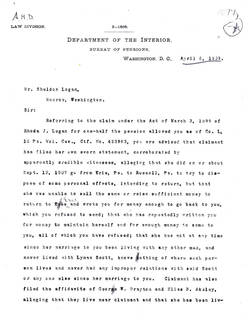 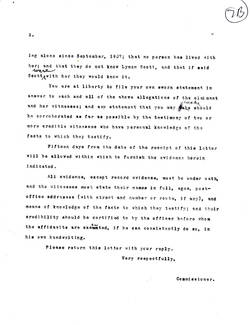 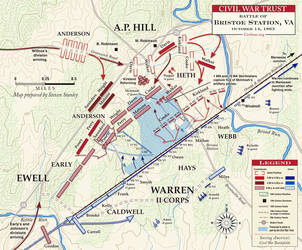 
The 12th Cavalry, a three year eastern theater unit and the “113th regiment of the line”, was composed on individuals from throughout the State of Pennsylvania. Mustered into Federal service for three years, the unit left the state bound for Washington City in late April, 1862. Its first assignment was to guard the Orange and Alexandria Railroad near Manassas Junction, VA. On 8/26/62 it was ordered to White Plains, VA to locate the enemy, who soon after arrived in Manassas in force. In a narrow escape from Bristoe Station, VA the regiment suffered a heavy loss.

Guard duty along the Potomac River preceded being held in reserve during the September battle of South Mountain, MD as Rebel forces moved northward toward Sharpsburg/Antietam. During that bloody 9/17 action the 12th was held in the rear, but after the battle followed the retreating foe. Duty in northern Virginia encompassed the winter of 1862/'63.

The next action facing the 12th was at Winchester, VA in June, 1863. After the July 1st – 3rd battle of Gettysburg, PA some of the retreating Confederate wagon trains fell into the hands of the 12th. Stationing in northern Virginia and southern Maryland then took the unit into the spring of 1864 when nearly the entire unit reenlisted and was furloughed home.

Returning to the field in April, 1864 the regiment was stationed around Martinsburg in northern VA.  With the movement of Rebel forces under Confed. Gen. Jubal Early toward Washington, D.C. in July of that year the 12th helped disrupt that northern movement at several locations.

Winter 1864/'65 found the 12th on railroad guard duty between Winchester and Harper's Ferry, VA. March, 1865 saw the regiment sent across the Blue Ridge Mountains to clear that area of northern Virginia of Rebel guerillas.

Following surrender of Confed. Gen. Robert E. Lee's Army of Northern Virginia on 4/9/65 at Appomattox Ct. House, VA, the 12th was stationed at Mt. Jackson in the lower Shenandoah Valley of VA to intercept and parole former Confederate soldiers.  Final muster came in nearby Winchester on 7/20/65.


As far as can be determined, Henry "Sheldon" Logan was born December 9, 1837 in Philadelphia, Pennsylvania to parents Joseph (b. 1812 NY) and Clarrisa (no nee b. 1814 NY) Logan.  In 1840, according to the U.S. Census the Logan’s were residing in or near the community of Robinson in Alleghany County, PA while in 1850 they were in Wattsburg, Erie County, PA. At that time Joseph's occupation was noted as "wagon maker."

Sheldon was apparently the eldest of four known Logan children.  His younger siblings were: Alvira (b. 1840 PA), Rosetta (b. 1845 PA) and Franklin (b. 1850 PA). There may have been other siblings, but by the time the 1860 census came around Sheldon was no longer residing with his parents.   At that time he was still residing in Wattsburg, PA, but was employed as a laborer on the farm of one Alan Reed.

At the end of February or the beginning of March, 1862 Sheldon, then noting his occupation as "mechanic", joined the U.S. cavalry.  Upon his enlistment for a period of three years his vital statistics were: 5' 7.5" tall, with a light complexion, blue eyes and dark hair. His unit assignment was to 12th Pennsylvania Cavalry Company L in which, on May 1st of that same year he was promoted to the rank of corporal. The following year on 3/1/63 he was again promoted, this time to the rank of regimental commissary sergeant.

On 3/10/63, shortly after his promotion to sergeant, Sheldon was admitted to USA General Hospital located in Clarksburg, West Virginia with what was diagnosed as "debilities".  Not long thereafter on 5/1/63 while with a detachment of cavalry near Clarksburg, muddy, almost impassable roads caused him to fall from his horse and injure his back. This injury kept him off duty until July 23rd of 1863.

In late February, 1864 Sergeant Logan, along with most of his regiment, re-enlisted for an additional three years. For this he earned a $400 enlistment bonus or "bounty" and a (30 day) furlough home. The furlough is of particular interest in the sergeant's case because while on leave in Corry, PA he wed Frances J. DeWolf (b. July, 1839 CT).  DeWolf was apparently Frances’ birth surname as in the 1880 U.S. Census residing in the Logan home was  20 year old Gilbert Sterling who was noted as Sheldon’s “stepson.” Although no documentation exists in available files, apparently Frances had been previously married to a Mr. Sterling. Also of note regarding this furlough is that on 7/21-22/64 after having returned to duty, Sheldon was treated for gonorrhea at a U.S. field hospital in Sandy Hook, MD. Additional ailments affecting Sgt. Logan during the remainder of his military tenure included diarrhea and rheumatism.

Separated from the service, former Sergeant Sheldon Logan returned to Erie County, PA and began to raise a family of his own.  It was there on 7/1/66 he and Frances' first child, son John "Johnny" W. was born. The following year the Logan’s quitted Pennsylvania and moved to Detroit, Michigan.  It was in Michigan on 2/24/68 second son, Edward F. (or H.) was born.  In 1869 the Logan’s moved within Michigan to the community of LaPeerand, in 1870 the foursome, with Sheldon employed as a carpenter, were in Somerfield, Monroe Co., MI.

1872.  At some point during this year the Logan’s removed from Michigan and resettled in Wisconsin where they settled in the community of Waupaca. It was apparently there that daughter Carrie “Dollie/Dolly” was born on 12/4/73 or 74.

In 1874 – apparently at year’s end if we accept ’74 as the birth year of Carrie “Dollie/Dolly” - the Logan’s moved again, this time from Wisconsin back to Pennsylvania where they settled anew in Erie County, likely in their old community of Wattsburg.  Daughter number two, Jeane “Jeanie” was born in PA on 10/14/76 and the census of 1880 found the family in Wattsburg with Sheldon remaining employed as a carpenter.

No census information exists for 1890 as most was destroyed by fire. However, in 1900 the Logan’s were still in Pennsylvania residing at that time in or near the Erie County community of Harbor Creek.  At that time Frances noted that she had born four children, all of whom were still living.

Sometime between the 1900 census being compiled and September 12, 1907 Frances Logan died.  No details are available pertaining to her passing or burial location.

On September 12, 1907 while still in Erie, Pennsylvania Sheldon remarried to Roda J. Curtis.  The marriage proved to be a disaster as, according to Sheldon, she left him the next day and never returned to resume marital relations. At least part of her motivation to marry him was likely  his receiving a monthly disability stipend from the U.S. Government based on ailments or injuries which he traced back to his years of Civil War soldiering.

By the end of 1907 Sheldon had moved from Pennsylvania to Washington State to live with son Edward then residing in the Snohomish County community of Monroe in the Puget Sound area of that state.

In (2/1/09 or) September of 1909 Roda filed an affidavit - apparently collaborated by "credible" witnesses - stating "that on or about 9/13/07 she did go from Erie, Pennsylvania, to Russell, PA to try and dispose of some personal effects, intending to return, but that she was unable to raise sufficient money to return to Erie and wrote Sheldon for money, but he refused. (She) has repeatedly written for money to come home, all of which have been refused. (She) never has lived with another man including (someone named) Lynn Scott." In short, Roda was seeking a portion of Sheldon's invalid pension funds.   In rebuttal to Roda's allegations Sheldon claimed he had, in fact send her funds "to come home."

On April 9, 1909 in Monroe, Washington, a man identified as G.W. Barber  affidavit  that he had known Sheldon Logan  - who was now living with his son in Monroe, - while he was residing in Erie City, (Erie County), PA. Mr. Barber asserted that (Sheldon) was a man of truth and veracity who had no way to earn a living except from (his) pension and his son.  He needs (his pension) more than Mrs. Roda Curtis for she had double and triple the property when I (he) let the state six years ago.  She is a woman with a very bad reputation.....always a bad actor.

On 9/4/09 Sheldon received a divorce from Roda.  Shortly thereafter her application to receive part of his pension was rejected on the grounds that she was no longer his lawful wife.  She had sued him for desertion, but had failed to establish martial desertion on the part of the pensioner for any period prior to said date (of divorce).  In turn Roda claimed she had never received notice of the divorce proceedings.......End of story.

Former Civil War cavalry trooper Sheldon Logan died on 2/21/15 in Monroe Washington.  The amount of his monthly pension stipend at passing is not known, but as of 12/9/12 it had been upped to $30 per month.  His Everett Herald obituary printed 2/12/15 read as follows:

"Major" (italics provided) has gone and no more will Monroe people receive his kindly greeting on the street nor notice his aged figure on the corner talking of "the war" with others among the few (remaining) honored members of the local G.A.R. Major H.S. Logan was a pronounced and sturdy character and had decided views on everything he was interested in that made his acquaintance always one of charm.  He suffered long in his last illness, but election time he always insisted on his right to be taken to the polls to vote for the good old Republican Party.  Major Logan died at the home of his son Sunday at the age of 77.  He served throughout the war the 12th PAcavalry and was appointed commissary Major by Gov. Curtis in 1865.  Two daughters, Mrs. Hagar of Detroit, MI, who is now visiting here, and Mrs. Connell, of Erie, PA, and two sons John W. who lives in KY and Edward F., resident of Monroe survive him.  Funeral services were held at the M.E. church Tuesday afternoon and the remains were honored by the attendance of the members of the G.A.R. Post No. 123 and the W.R.C.  The honorary pall-bearers were chosen from amongst the G.A.R. and were Comrades Sanders, Altizer, Pattison, Johnson, Peddycord and Marshall.  The active bearers were Messrs. O.M. Hays, Ray Johnson Wm. Dennison, Hunter, H.J. Keech and H.H. Bartels. Burial was in the Monroe I.O.O.F. Cemetery.