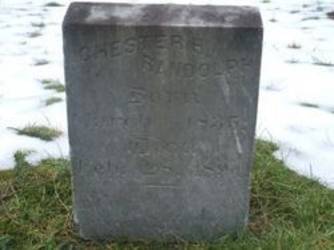 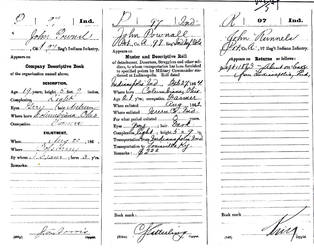 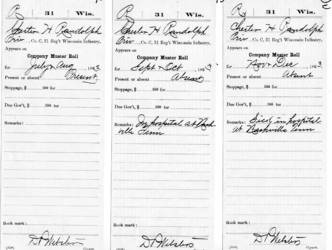 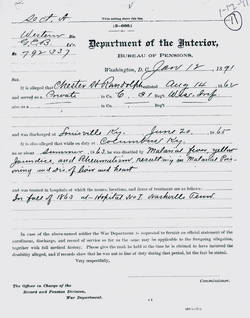 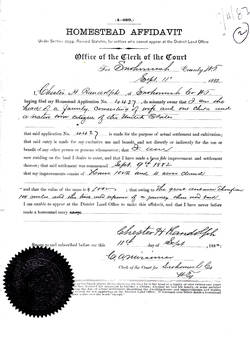 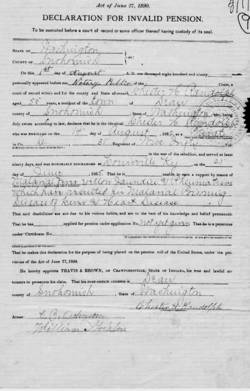 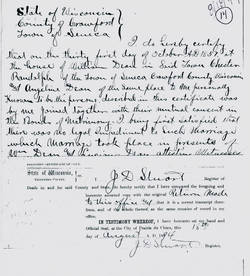 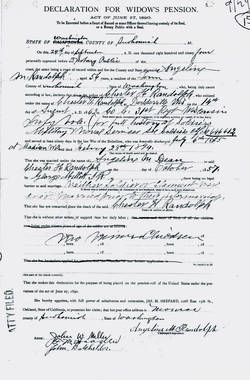 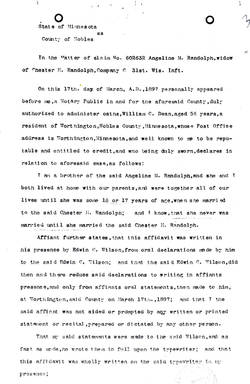 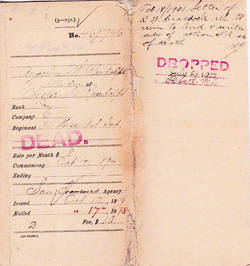 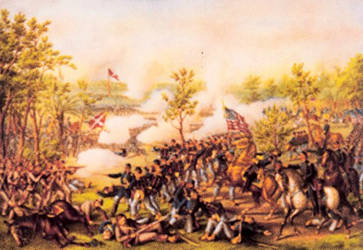 On 3/1/63 the unit left Wisconsin for Columbus, KY where the bulk of the regiment preformed picket, provost (military police) and reconnaissance duties throughout the spring and into the summer before it was moved into Tennessee.

1864 found the regiment with Union Gen. William T. Sherman's forces participating in the siege of Atlanta, GA. With the fall of that city the 31st participated in the famous "march to the sea."

In early 1865 the 31st   was marching northward through the Carolina where it saw heavy action at both Averysboro and Bentonville. With active service behind it, the regiment participated in the Washington, D.C. Grand Review. It then moved to Louisville, KY for final muster.

Documents pertaining to Chester H. Randolph life provide a number of birth years ranging from 1834 through 1837. However, as his tombstone denotes his birth month and year as March, 1835, that benchmark will be used herein.

Also varying is the location of his birth which is noted as Belchertown, Hampshire County, MA or Vermont. Likely, Massachusetts is most accurate as this state designation dominates in U.S. Census readings.   Parentally, the names of neither Mr. Randolph's mother nor his father are known. So, too, nothing is available pertaining to his childhood, formative or teenaged years.

The first viable documentation pertaining to Chester is his 10/31/57 marriage to Angeline Melissa Dean (b. 9/1/38 OH) in or near the community of Seneca, Crawford County, Wisconsin.  The union would last until Chester's death in 1894. It apparently produced at least one child identified only as D.F. (b. 1878 MN) who, as will be shown, likely did not survive into adulthood.

During the summer of 1862 Chester enlisted in the U.S. Army volunteers, serving with the 31st Wisconsin infantry. At enlistment his physical characteristics were noted as follows: height- 5'7", complexion - dark, eyes - blue, and hair - black. His occupation at the time was listed as farmer.

Available military records show nothing significant pertaining to Private Randolph through his first year of service; his status always being noted as "present."  In the summer of 1863 that changed when it was noted that while camped near Columbus, KY in close proximity to stagnant water, Chester contracted malarial fever, yellow jaundice and rheumatism. Subsequent company rosters from October, November and December thus list him as "sick in hospital" Nashville, TN.  Also noted was chronic diarrhea.

The sick/hospital designation continued into January and February, 1864 and prompted a furlough home likely for the purpose of getting well. As such, Private Randolph did not return to his unit until May of that year. After his return he was charged somewhere in the range of $9.68 for transportation provided by the U.S. Government! Private Randolph remained relatively healthy and with his unit for the remainder of the War.

Exactly where Chester settled after leaving the service is not known. Being married, however, likely he returned to Wisconsin. In 1870, however, he and Angeline were found in Ripley Township, Butler County, Iowa where they were farming. Also in the home at the time was Angeline's father, William (b. 1811 NY). As noted by the 1878 birth of a child, by that year the couple may have left Iowa for Minnesota. Exactly when they moved there and how long they remained is not known, but in 1880 when census takers came around again they were back in Iowa.

After the 1880 census and before September, 1882 life changed dramatically for Chester, Angeline and "child" as they packed up and moved from Iowa westward to Washington Territory where they filed a homestead claim on eighty acres of land near the present-day City of Monroe located in Snohomish County. A third party affidavit also from  September, 1882  verifies that by this time the couple had made improvements to the land including construction of a 10' x 12' house with four acres cleared for agricultural usage.

The Randolph's homestead experience proved to be successful as in1888 final notice was made granting the homestead to Chester and Margaret. At that time their house was noted as an 18' x 24' structure continuing four rooms and three doors. Other amenities on the property included out buildings and fences. Items of ownership include one wagon, one buggy, one shovel plow and "other tools." Livestock included five cows, 7 calves, 23 sheep, 6 hogs, 2 horses and 50 chickens. Crops raised during the previous six seasons included hay, grain and vegetables.

Although no data exists from the 1890 census taking, a document from August of that year indicates the Randolph’s homestead was in or near the community of Dean in Snohomish County. Unfortunately, no information has been located pertaining to such a community or area.  At the time, in an attempt to gain a U.S. Government disability pension based upon ailments stemming back to his Civil War soldiering days Chester was said to be unable to earn a living because of malarial yellow fever poisoning which had caused liver disease, heart trouble and rheumatism. A pension was granted, although when and for what amount is not known.

Farmer and rancher Chester H. Randolph died on February 18, 1894. Cause of passing was listed as heart disease which followed about one week of illness. At death Chester was just shy of his 59th birthday. Burial was in the Monroe IOOF Cemetery.

Following her husband's death, Margaret appears to have remained on the Monroe-area farm she and Chester had homesteaded. Also, while her monthly stipend is not known, she continued to receive a monthly government stipend based on Chester's Civil War service.

Margaret Randolph died on 6/24/00 at 61.10 years of age. Although her death came in a Seattle, WA hospital, she was still a resident of the Monroe area owning what the Monroe Monitor newspaper described as "one of the best farms here." Mrs. Randolph was buried beside Chester. As Chester and Margaret left no direct descendents, the farm and property were left to a niece, Mrs. John Bachelder.