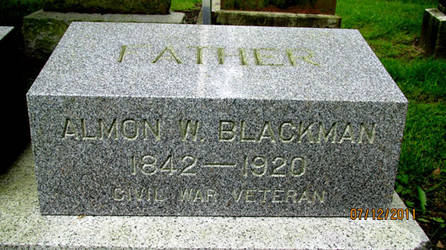 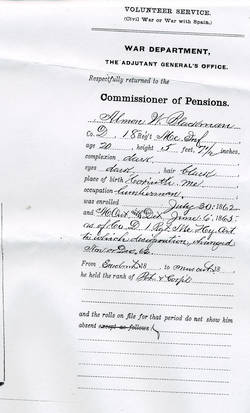 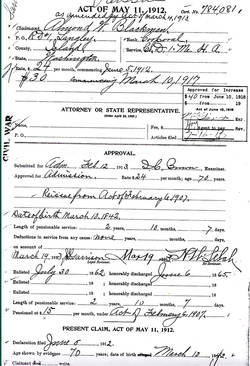 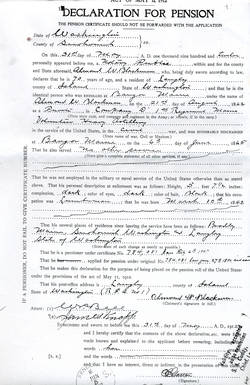 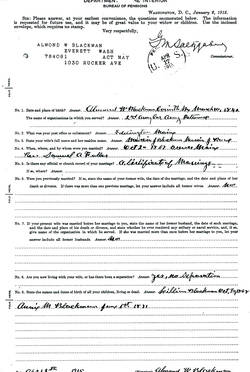 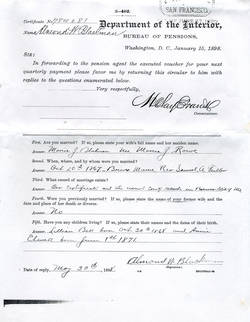 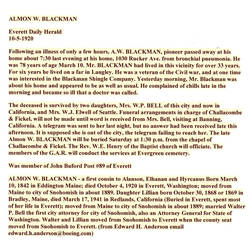 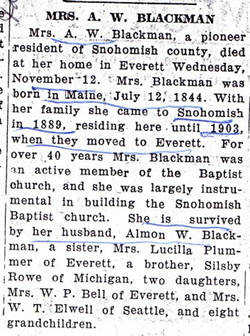 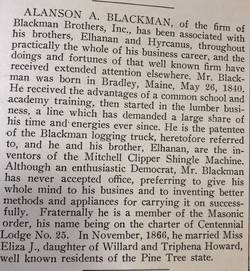 The change in designation from infantry to heavy artillery was due to the fact that this regiment trained in both infantry and heavy artillery tactics. The organization of the regiment was changed as well, as two new companies were added; increasing the number of companies from 10 to 12 and the size of each company was increased from 100 to 150 men, bringing the total strength of the regiment to 1800. The companies of the regiment, stationed in the defenses of Washington, building and garrisoning batteries and forts, had escaped the hardships and struggles of battles such as Antietam, Chancellorsville and Gettysburg. In the spring of 1864 with a shift in strategy in the Union command life would dramatically and profoundly change for the men of the First Maine Heavy Artillery.

In the spring of 1864 Union General Ulysses S. Grant launched his Overland Campaign against the Confederate Army of Robert E. Lee in hopes of ending the war once and for all, after convincing Secretary of War Edwin Stanton and President Abraham Lincoln that he needed to get all available troops into the field. For the First Maine Heavy Artillery the request meant that they would leave the relative comfort and safety of garrison duty and join their comrades in the field for the final push on to Richmond. On May 14, 1864 the First Maine Heavy Artillery, along with several other heavy artillery regiments, was ordered to organize as a separate division under the command of Brigadier General Robert O. Tyler. Tyler’s Division of Heavy Artillery was then ordered to the front to join Grant’s Army of the Potomac as part of the Union Army’s Second Corps under the command of Winfield Scott Hancock.

On May 17th the First Maine left Belle Plain and marched to the City of Fredericksburg where it crossed the Rappahannock River and began to hear the roar of guns in the distance. Upon arriving at the front on the morning of the 18th of May the Heavy Artillery Regiments, fresh and at full strength, began to see the results of war. The view of the battlefield was not a pleasant sight to behold as there were dead and wounded soldiers from both sides, some in small groups, others laid out individually across the battlefield.

After being briefly under fire on May 18th, the men of the First Maine spent the first part of the day on the 19th encamped in a wooded grove near an open field off the Fredericksburg Pike outside of Spotsylvania Court House. Encamped along with other freshly arrived Heavy Artillery regiments of General Robert O. Tyler’s 4th Division of the Second Army Corps, the First Maine found themselves holding the rear right flank of the Union Army. The Union Army was beginning to disengage from the lines around Spotsylvania Virginia, and was preparing to move south towards Richmond in an all out attempt to outflank Confederate General Robert E. Lee and his Army of Northern Virginia.

As the bullets from Ewell’s command slammed into the ranks of the First Maine Heavy Artillery, scores and scores of Maine men fell. For these men, most of whom had never been in combat before, the sights and sounds of battle were as indescribable as they were destructive. This first battle for the First Maine Heavy Artillery brought with it a large number of casualties. The regiment lost 155 to death or mortal wounds and another 375 wounded. Company D, which was at the end of the First Maine line guarding the right flank found itself positioned in a small wooded area. This small amount of cover provided protection, and company D only lost one man, Corporal Charles W. Smith an 18 year old from Bangor. The cries of pain from loved comrades wounded or dying, the rattle of musketry, the sound of leaden missiles tearing through trees, and the dull thud of bullets that found their human marks, produced a feeling of horror among those who survived the battle.

After resting most of the day on May 20, those of the First Maine Heavy Artillery who could still march were ordered to fall in with the rest of Tyler’s Heavy Artillery Brigade and join the march of the Second Corps at Massaponx Church on towards Milford Station Virginia. At Milford Station they were ordered into line and instructed to prepare breast works for an expected assault. Company D under the command of Lt. Henry Sellers was ordered forward to the main line to serve as pickets and warn of impending assault. The First Maine subsequently participated in the assaults and capture of key Confederate positions at Chesterfield Bridge on the North side of the North Anna River and served on the North Anna line from May 20th to the night of the 26th, extending the line along the North side of the river to east of the Telegraph road.

On May 24, 1864, the Heavy Artillery Brigade of General Robert O. Tyler was broken up with most of the heavy artillery regiments ordered to join other veteran brigades within Second Corps. Most of these brigades after three long years of battle were smaller than the heavy artillery regiments that were joining them. The First Maine was ordered to join General Price’s Brigade of the Third Division of the Second Army Corps. Three days later, the First Maine was ordered to join General Greshom Mott’s Brigade of the Third Division. By noon on May 27th the First Maine Heavy Artillery was again on the march with the rest of the Union Army Second Corps in the direction of Hanover Court House and further south. The column finally marched into line facing the Confederates near the small village of Cold Harbor on the Morning of June 2, 1864.

The First Maine and the brigade they were attached to did not participate directly but served in a supporting role during the Union offensive at Cold Harbor from June 2nd to the 12th. At Cold Harbor, on more than one occasion, Heavy Artillery regiments were selected to lead the assaults against the Confederate lines. The logic behind this was simple. Getting these larger, fresh regiments to lead the way would hopefully be more successful and would give the Union Army an opportunity to take advantage of any breakthroughs gained by these regiments by following them up with veteran troops. During the period from June 1st to the 12th the Army of the Potomac’s estimated losses were as follows: killed and wounded 10,971, missing 1,816 for a total of 12,787. The Union Army Second Corps, to which the First Maine was attached, took the brunt of Grant’s Cold Harbor offensive. Of the 26,900 soldiers present for duty the Second Corps had 494 men killed, 2442 wounded and 574 missing, for a total of 3510 casualties at Cold Harbor.

During the three days prior to June 18th the fortified confederate positions at Petersburg were being bolstered by General Lee’s veterans of the Army of Northern Virginia. The Union Army could hear the troop trains rolling into Petersburg.

In looking at the troops under his command, General Mott recalled that he knew the chances for success in charging the Confederate works were slim and that the veterans under his command would not be willing to try again. Mott wrote: “I knew that it was useless to expect suicide in mass from my old troops, who had seen the wolf and felt his teeth and bore his scars”. Mott further explained that all he could hope was that a Heavy Artillery Regiment, like the First Maine “innocent of the danger it was to endure, would lead off with a dash, carry the works with a rush and then it was my duty to take care that old steady regiments were on hand ready to support, press and profit by any advantages won by the gallant forlorn hope.”

Although ordered to support the charge of the First Maine Heavy Artillery, the entire command of the First Massachusetts Heavy Artillery and the Sixteenth Massachusetts laid down instead of advancing. According to an official report when Major Cooper of the Seventh New Jersey ordered his regiment forward he quickly realized that he was not being properly supported and therefore did not move his regiment beyond the Hare house. Apparently the officers of these regiments also saw the hopelessness of the charge.

Upon hearing that the assault of the First Maine Heavy Artillery had failed, General Mead wrote to General Birney, “we have done all that is possible for men to do.” As a result, the Union Army prepared to lay siege to the city of Petersburg. The June 18th charge of the First Maine Heavy Artillery was the last assault made by Union forces during the opening days of the Petersburg Campaign..

The majority of the veterans of the First Maine Heavy Artillery who chose to record the regiment’s history decided not to focus on the controversial aspects of the June 18th charge and instead became comfortable with looking upon the charge as the culmination of their patriotic duty. Participation in the charge was a badge of honor and the mark of a true veteran. Those who missed out on what was to that point, and would remain the most significant experience for the regiment could not fully share in the brotherhood of the “gallant 900”.

In 1905 the survivors of the regiment erected a memorial to honor their sacrifice and those of their fallen comrades. This monument is the only memorial on the field at Harris Farm, and the only tangible reminder of what happened on that piece of Virginia countryside.

The original members were mustered out on June 6, 1865. The remainder of the regiment including the accessions from the 17th and 19th Maine infantry remained in service and were mustered out at Washington D. C. on the 11th of September 1865.

Source of information for Regimental History: “The First Maine Heavy Artillery During the Overland Campaign” by Andrew J. MacIsaac, A Thesis in the Field of History for the Degree of Master of Liberal Arts in Extension Studies, Harvard University May 2001.

Almon W. Blackman was born March 10, 1842 in Eddington Maine. Having survived the war, he was married on October 20, 1867 in Brewer Maine to Marcia Jane Rowe. Almon and Marcia had two daughters Lillian A. and Annie M.

Almon, his wife and two daughters relocated to Snohomish County Washington approximately 1889. They settled in the city of Snohomish and resided in Washington for the remainder of their lives. Almon’s oldest daughter Lillian married Walter P. Bell who had moved to Washington in 1879. Mr. Bell served as the first city attorney for the city of Snohomish, and later was elected Attorney General for the State of Washington in 1908. Almon’s younger daughter Annie marred Will T. Elwell. The Elwell’s were an early pioneering family in the Snohomish river valley.

Almon’s older brother was Charles A. Blackman who founded the C. A. Blackman mill. This was one of the earliest cedar shingle mills in Everett and was located at the far north end of that town site, an area then referred to as Blackman’s Point (now referred to as Preston Point). Almon and Charles had been financially involved in business in Bay City Michigan prior to settling in Washington and Almon was to some degree involved with his brother Charles in the C.A. Blackman mill at Blackman’s Point in the 1890’s.

In 1906 Almon took up a homestead of 160 acres in section 9 just to the west of Langley on Whidbey Island. Almon and Marcia lived on Whidbey Island for 6 years, later relocating to north Everett.

Almon Blackman was a member of the G.A.R. John Buford Post # 89 of Everett and he died at his home in Everett, at 1030 Rucker Avenue on October 4, 1920. His wife Marcia Jane died November 12, 1919. They were both laid to rest in lot 80, block 22, fourth addition of Evergreen Cemetery in Everett Washington.