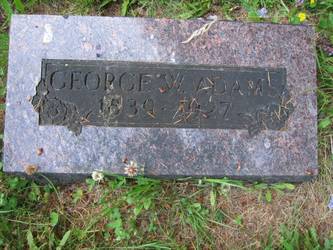 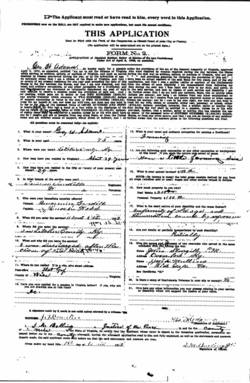 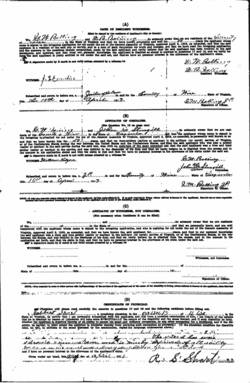 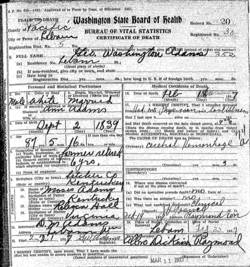 .As is the case with many Confederate military bodies; the history of the 10th/13th is murky. Although the regiment was apparently assembled in Virginia, its organizational roots trace back to eastern Kentucky.  Many recruits in several companies were from Whitesburg in that state’s  Letcher County

An element of the Confederacy’s Army of East Tennessee, the unit served, at times, under General John Hunt Morgan’s command.

The 13th (sic) reportedly clashed with Federal forces in Tennessee, Kentucky and Virginia. Significant actions included the battles of Leatherwood (10/19/1862), KY and Marion (13/17 – 18-/1864), VA. Apparently, the unit was also involved two engagements around Whitesburg, KY as The War drew a close.

As noted, the ten Adams children were born in Kentucky. At least some, but probably all, were birthed in Letcher County.

By 1860 George had married and he and his bride were living (and likely farming) with her parents in Letcher County, KY His bride was Anna “Annie” Mullins. **.   Anna had been born 9/1842 in Kentucky. How when and where the two had met are unknowns, but it can be surmised that they had known one another all their lives.

Looking at the birth states of their offspring, one can see that George and Anna spent the bulk of their child producing/rearing years in Kentucky…………But, wait.  Before we make that journey,   a civil war had to be fought.

In April, 1861 civil war/rebellion spread across America. In October, 1862 George answered the call to arms given by the Confederate States of America (*CSA) and, as did many young lads and men in Kentucky, left his – then pregnant wife – and enlisted in the C.S. Army.

Although the connections are murky, it appears that our young Private Adams’ unit of service was the 10th (later the 13th) Kentucky Cavalry. Relying upon what military service records do exist, it appears George suffered from some unidentified sickness/sicknesses which, at the end of 8/1863 saw him absent on furlough from his unit. Beyond that time his activities in the Confederate military are not documented. In later years, however, he would note that he served until discharged at The War’s end.

Army life behind him, George returned to his farm, wife and child in Letcher County, KY. There, as earlier noted, he continued to grow his family.

There is no 1890 census data on George and family because most of that tally was destroyed by fire. At the dawn of the twentieth century, however the Adams clan was no longer farming in Kentucky. They were, instead, tilling the soil in Roberson Wise County, VA. What had drawn the family northward to that location is an unknown. As for when the family moved northward, in 1913, when applying for a state pension based on ailments and disabilities which he traced back to his days of Civil War soldiering for the Confederacy, George noted that he had come to Virginia circa 1884. A pension, it appears, was not granted.

Roberson was George’s community address in 1910, but not a decade later. As the 1920s dawned the family was farming in Lebam Pacific County, WA. Again, what had drawn them to the Pacific Northwest and when they arrived here are unknowns. Further, George did not list an occupation in that year’s census tally.

George Washington Adams died in Lebam Pacific County, WA on 2/18/1927. Cause of the 87.5   year old’s passing was listed as a cerebral hemorrhage (stroke). Burial was/is in the Maple Hills Cemetery located in Lebam, WA.

Although documentation is incomplete, it appears that following George’s death Annie remained in Pacific County. In 1940 she was residing there in the home of married daughter, Laura, and her husband.

** During the American Civil War (ACW) Anna’s brother, Joseph Mullins, also served in the 13th Kentucky. He had enlisted on 10/18/1862 at Whitesburg, KY. He survived The War.