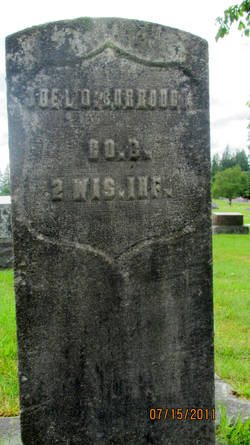 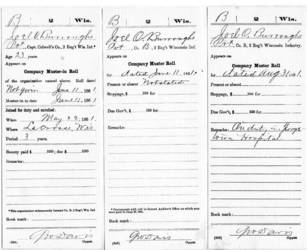 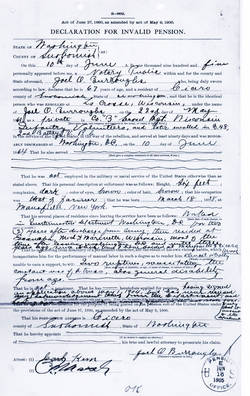 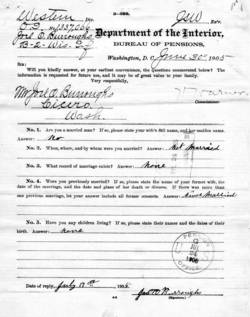 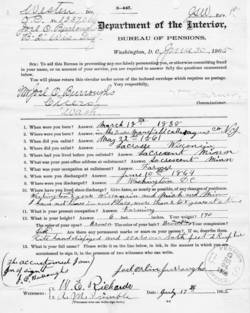 The second Wisconsin, a three year eastern theater infantry regiment, was organized in May, 1861 and left the state on June 20. It was the first three year regiment to appear in Washington City, D.C.

From December, 1861 onward to May, 1864 the regiment's history was merged with the famous "Iron Brigade". That organization composed of 2nd, 6th and 7th Wisconsin infantry plus the 19th Indiana and 24th Michigan.

1862. At the 9/14/1862 battle of South Mountain, MD the 2nd lead the "Iron Brigade's left and assisted in routing the enemy. At the battle of Antietam/Sharpsburg which followed on 9/17/62 the brigade dislodged the enemy after a severe conflict. The 2nd and the "Iron Brigade” ended the year at Fredericksburg, (12/11 – 15/62) where it held an exposed position subject to Rebel fire.

At Gettysburg, PA (7/1-3/63) the 2nd headed the Union marching column and was the first to engage Confed. Gen. Heth's division. A Rebel volley cut down 30% of the regiment's rank and file. Dashing upon the enemy's center the unit held the Confederates in check until the entire brigade came into line. The Rebels were then routed.

Returning to Virginia in 1864, at The Wilderness, Gaine's Mill, Cold Harbor and Petersburg the "Iron Brigade" added new luster to the Union Army. Although the 2nd was bearing well its part in this glory, it was soon so reduced in numbers that it was detached from the Iron Brigade and assigned to provost guard (military police) duties. It remained on such duty until final muster.

After final muster of original members, those who joined the regiment subsequent to its original organization were organized into an independent battalion of two companies. Additional provost duty, plus guard and picket assignments preceded the Union advances upon Petersburg during the latter part of 1864. On November 30th the two companies were transferred to the 6th Wisconsin with whom they remained until that unit, too, was mustered out of existence.

The Invalid Corps (later the Veterans Reserve Corps) was a military organization created within the Union Army during the American Civil War to allow partially disabled or otherwise infirmed soldiers (or former soldiers) to perform light duty, freeing able-bodied troops to serve on the front lines.

IC/VRC troops were divided into two Classes: Class 1, partially disabled soldiers who’s period of service had not yet expired, and who were transferred directly to the Corps, there to complete their terms of service. Class 2, soldiers who had been discharged from the service on account of wounds, disease or other disabilities, but who were yet able to perform light military duty and desired to do so.

As the war went on, it proved that additions to the Corps hardly equalled the losses by discharge or otherwise, so it was finally ordered that men who had had two years of honorable service in the Union Army or Marine Corps might enlist in the IC/VRC without regard to disability.

No regimental information is available beyond Organization and Muster Out dates.

No battalion information is available beyond Organization and Muster Out dates.

Other than his period of Civil War service little documental information is available pertaining to the life of Joel Olin Burroughs. Firstly, he was reportedly born on 3/18/37 or 38 in Mansfield, Cattaraugus, New York, but no such community exists on modern maps or in contemporary atlases. Secondly, the names of neither his father nor mother is known. Thirdly, there are no names of possible siblings. Fourthy, there is no insight into his childhood, formative or teenaged years. Finally, he never married and/or fathered children, so he left few, if any, "bread crumbs" behind to follow him in his life trek across America.

Initial data on Joel comes when, on 5/22/61 in La Crosse, WI, he enlisted in Captain Colwell's Company of the 2nd Wisconsin Infantry. This organization subsequently became Company "B" of the 2nd. Even his enlistment, however, comes with questions one of which is why, when he was residing in Minnesota, he joined a Wisconsin unit in Wisconsin. The answer is not known.

Private Burroughs' initial experiences after entering the military were illnesses. From July 5th to the 9th he suffered from the mumps. From the 9th onward to an unnoted date he was stricken with an inflammation of the testicles known as orchitic. Whether or not these conditions lead to it or not, as of 8/31 he was absent from his company on duty in a Georgetown, D.C. hospital.  By year's end the institution to which he was assigned on detached, extra duty service was Circle Hospital in Washington City. This institution, also known as the Riggs House, was located on 24th and K Streets in D.C. Private Burrough's assignment to Circle would remain on "detached" status until 4/30/62 when his "detached" assignment was officially ended and he was "transferred" to that facility. Still, throughout all these moves Private Burroughs remained on the 2nd's regimental and company rolls. However, he would never return to his field unit.

Not long after his permanent assignment to Circle Joel himself became a patient as; in May of 1862 he contracted one of the stains of variola or smallpox. This resulted in his being under treatment for 31 days before returning to duty at Circle on 6/11. Private Burroughs would remain on active hospital duty for the remainder of the calendar year.

1863. As the War dragged on Private Burroughs remained on hospital assignment at Circle Hospital. However, rather than remaining on the rolls of the 2nd on hospital service forever, in December, 1863 his  status with the 2nd WI ended when he was officially "transferred" from the 2nd to the Invalid Corp. His new unit designation was the 3rd Regiment IC Co. "H". Under this arrangement exactly where he was "assigned" is not documented, but likely it was in the afore mentioned Washington City Circle Hospital. Private Burroughs' connection to the 3rd IC continued until that organization was mustered out. He was then transferred to the 2nd Battn. Veterqns Reserve Corps Co. "48" for the balance of his enlistment period.

On the 10th of June, 1864 Private Burroughs initial term of enlistment came to an end. Amidst the mustering out process we gain our only glimpse into what his army duties may have been after he departed the 2nd Wisconsin. While away from the 2nd he was referred to as both a convalescent and a hospital cook. Perhaps cooking had been his hospital assignment from the very beginning.

Upon settling financial accounts with Uncle Sam Joel was once again a civilian.  His civilian status, however, did not take him far from the U.S. Army. For the next two years he was employed by the Quartermaster's Corps in Washington, D.C.

At some point within the calendar year 1866 Joel quitted Washington City and moved westward to Escanaba, Delta County, Michigan. What drew him and how long he tarried there is not known. His whereabouts are not indicated in the 1870 or 1880 U.S. Census tallies.

Joel is next sighted on 7/13/86 in Pike, Marinette Co., Wisconsin when he moved from that location to a 120 acre homestead claim located in the nearby community of Peshtigo. On 8/28/93 he would receive the patent (deed) to the land after having made the following improvements to the tract: Building 16' x 24" initial dwelling with a shingled roof, 1 door and 5 windows, constructing a second, 10' x 12" stone house and clearing 6 acres for cultivation. Total value of improvements = $500 to $600.

As with other aspects of his life story, how long Joel remained on this homestead tract is unclear. On some date between 1893 and the dawn of the 20th century he left the homestead and resettled in Menomonie Duke Co., WI. What happened to the homestead? Did he sell it? If so, why? Available documentation provides no answers for these questions.

While considering unanswered questions one also has to ask if when Joel departed from the Peshtigo homestead did he move directly to Menomonie. Available papers hint at a post war residential stop in MN, but we have no documental evidence on this beyond this one hint. Did he live there between Peshtigo and Menomonie? Likely, we will never know.
One mention Joel did make about his residential moves is that he once stated that he generally "lived 2 to 5 years" in each state he visited. Why was that? The 1900 census for Felch Dickinson Co. MI may provide a clue for answering that question. In that tally Mr. Burrough listed his occupation as "cruiser." This is most likely a reference to him being a timber cruiser, an employee of a timber company hired to scout and evaluate the yield and financial potential of new logging tracts.

Circa 1901/'02 Joel left Michigan and moved to the western part of Washington State. While it is not documented, possibly it was availability of virgin timber lands which drew him here. It appears his first place of residence in Washington was the City of Everett. From there, he moved slightly northward to the community of Marysville and, then, further to the north to the remote Cicero, a stop along the Great Northern railway line extending from nearby Arlington. His final stop in Snohomish County - and in life - would be near Oso, close to the northern Snohomish/southern Whatcom County border. There, he again began establishing a homestead.

On 5/1/04 while in Cicero, Joel Burroughs finally got around to applying for a U.S. Government disability pension based on his days of Civil War soldiering. This initial effort, however, proved to be without results. As such, a year plus later - on 6/15/05 - the 67 year old "farmer" tried again.

On this occasion Joel attested that he was almost entirely unable to perform manual labor because of two ruptures - one on his left side suffered in 1885 and a second on his right suffered in 1898 - which necessitated his wearing a supportive truss at all times. Also claimed was age debility and heart disease. Other physical problems identified during this process included a disfigured right hand and scars on his feet. These frailties sustained, a monthly stipend of $8 was subsequently granted retroactive to the 6/15 application date. One interesting fact that came out during this period was that Joel now considered his occupational field to be carpentry.

Shortly after granting of the original pension an additional medical exam recommended a stipend increase to $10. Such was never implemented. Joel Olin Burroughs received his last pension check on 3/4/07. The Oso resident died 3/28/07. His 3/30 newspaper obituary in the Arlington Times newspaper read as follows:

"Joel O. Bourroughes of Oso, who had been in Dr Mohrmann's hospital for several days, suffering with dropsy and partial paralysis, died Tuesday night. Burial occurred at this place Thursday at 3 o'clock under the auspices of the G.A.R. Deceased was seventy years of age and a veteran of the civil war, serving with Co. B, 2nd Wisc. infantry. He resided in Wisconsin and Michigan until a few years ago when he came to Washington. The only address found on his person was Metropilitan Dickman Co., Michigan. He resided on a 40 acre homestead near Oso for the past three or four years but had not completed title to same. Aside from this he had no real property. His quarterly pension check arrived a day or two before death and it is said that a sum of something less than $100 is due from a neighbor to whom he had sold a horse. Deceased had never married and knew of no near relative. An application was pending for admission to the soldiers home at Orting."