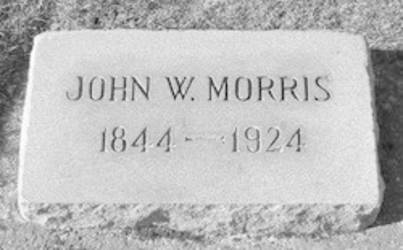 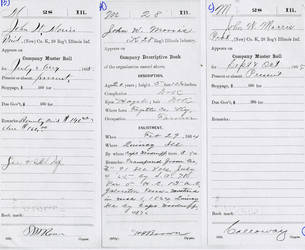 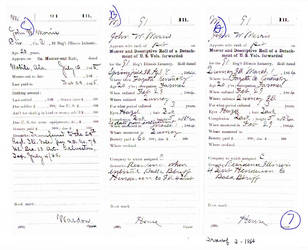 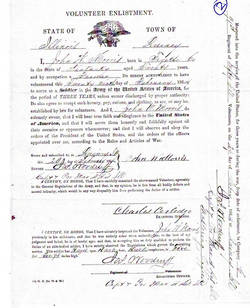 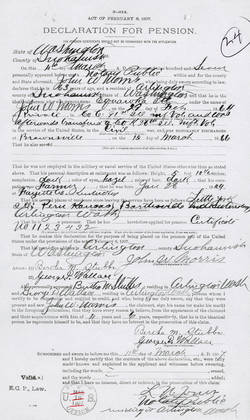 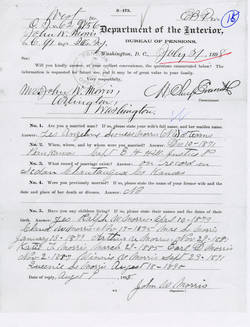 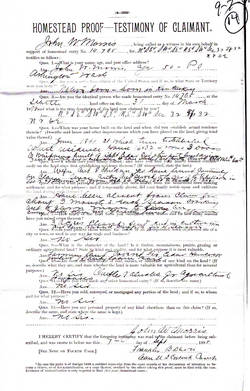 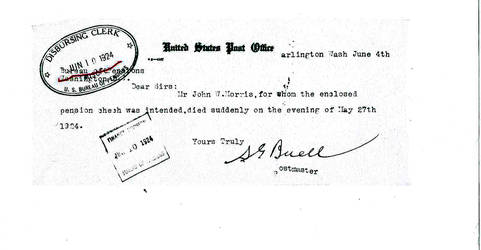 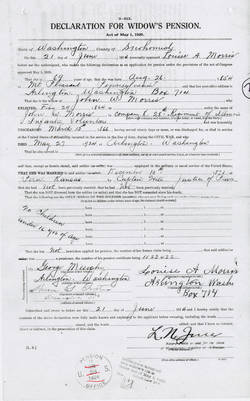 John Morris affidavit of friends of marriage to Louisa Stearns 1924 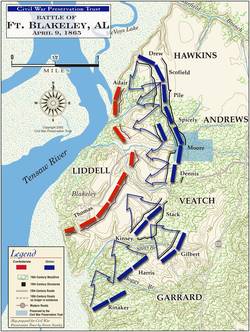 This three year western theater regiment left Illinois on 10/1/62 and arrived at Sheperdsville, KY on the 8th. On 12/27 after an engagement with the Confederate forces of General John Hunt Morgan at Elizabethtown, during which it lost 7 killed and a large number of wounded, the 91st surrendered to the Rebels and was paroled.

1863. On June 5th the regiment was exchanged and newly armed and equipped for battle. Sent to Louisiana, that September it fought at the Atchafalaya River. The enemy holding his own, the 91st and the brigade to which it belonged fell back six miles. The following day the brigade advanced and drove the Rebels across the river.

On 11/6 the unit started for Brownsville, TX skirmishing with the enemy along the entire route. It reached Fort Brown on 11/9 and went into winter quarters where it remained until 12/31 when it made its famous raid on Salt Lake 90 miles away in enemy territory. There the regiment captured a lake of salt two miles square, a few hundred horses, mules and cattle which were promptly confiscated for the "good of the command."

1864. In September of that year the regiment had quite a fight with Confederates at Bagdad, Texas on the north side of the Rio Grande River. At the time it was said a squadron of French troops forded the river to aid the Rebels, but were driven back over the old 1846 Mexican – American War battlefield of Palo Alto, Texas.

NOTE: As Private Morris' transfer from the 91st to the 28th occurred after the war had ended the history of that regiment is not presented herein.

John W. Morris was born 1/28/43 or ’44 (For our purposes we will accept 1844) in Fayette County, Kentucky. His parents were William (b. 1821 KY) and Eve Ann (nee Carpenter b. 1827 KY) Morris. By 1845 the Morris family had quitted Kentucky in favor Illinois. The U.S. census for 1850 found the Morris' settled in or near the community of Warren. At that time William's (the census spelled the surname Marris) household was composed of parents William and Ann plus children John and younger siblings Mary (b. 1845 IL) and William M. (b. 1850 IL). Under the same roof were a couple surnamed Lathrop and their two children. The relationship between the Morris' and the Lathrops, if any, is not known.

The next documentation pertaining to John W. comes from 9/27/61 in Oquawka Henderson Co., IL. On that date and location his father, William, joined Captain Kinsloe's company of Black Hawk Cavalry at the rank of farrier. [A farrier is a blacksmith who shoes horses.] (This unit would subsequently become Company "D" of the 7th Missouri Cavalry [Union]). John later recalled this period of his life: "I was never in the military prior to 1864, but was with the Black Hawk cavalry while at Warsaw, Illinois. It then moved to Clarkesville, MO and then to Macon City, MO. (At that time) the name of the regiment was changed to the 7th Missouri cavalry.  I was with my father.  He took me along so I would get tired of the life of a soldier.  He did not want me to enlist in the army. I stood guard, went on scout and took care of the horses just as if I was enlisted. In the last of February, 1862 he sent me home and I stayed."

On 8/11/62 during the battle of Independence, MO the Morris patriarch was wounded.  On 9/29/62 that wounding resulted in his being granted a medical discharge. John, again: "My father came home shot in the head. As soon as he was able to walk about the farm I enlisted." That enlistment was for three years or "the duration of the war." John’s vital statistics at the time were: 20.1 years of age; 5'10.5" in height; hazel eyes; dark complexion and dark hair. His occupation was noted as "farmer." For signing up private Morris was given a $300 enlistment bonus or "bounty", $60 which was paid up front with the balance to be received incrementally later.

On 3/11/64 John rendezvoused with other new troops at Camp Yates located in Quincy, IL. From there, that same month, he moved to Camp Butler located in Springfield, IL where he promptly contracted a case of the measles. Available records note the following: "A man in his (John's) company who had enlisted at the same time helped him through this.  (The measles were) followed by diphtheria which left him very sick for several days...and seemed to leave him with throat problems including trouble swallowing.  Throughout the remainder of his period of service he seemed to suffer more severely than others for want of water.”

By the latter part of April, 1864 Private Morris was in a troop distribution camp located in New Orleans, LA. While there his medical woes continued. A comrade later recalled that several soldiers including Morris were suffering from dysentery yet doing guard duty and drill. (They) did not report to sick call until from weakness and misery (they were) forced to drop from the ranks.

By mid- May '64 the 91st, including Private Morris, was in Brownsville, TX. Dysentery continued to plague him and weakened his bowels which lead to his having the flux (rectal loss of bodily fluids). Treatment for diarrhea continued to be noted in his service files.

1865. June. With the War having ended the U.S. Government was shedding the burden of paying soldiers by discharging them or at least downsizing by consolidating regiments. As such, on the 22nd of that month the 91st was mustered out of service and men with some members with time left to serve were transferred to the 28th Illinois infantry.  It was while with the 28th the following incident was documented: He (Private Morris) and others were sent on detached service to Bananas Ranch about 60 miles by river from Brownsville to haul wood and load (it) on steamboats. A comrade: "While at that place (Morris) was taken sick with flux, very bad. No army surgeon was available, so a friend and comrade went for doctor who lived on a neighboring ranch.  The doctor came over and treated him. I think (he) was sick about 2 weeks during this attack of the flux. While straining (during) stooling his rectum protruded from his body terminating in piles (hemorrhoids). He was bothered less by piles from then on.  I was in contact with him (until 1869/70 or so) but after that haven't seen him much) but (but he still) complains of piles." Private Morris was mustered out of Federal service on 3/15/66 and discharged on 4/6.

Out of the military, John settled in Little York, Illinois. According to documental telling, his father had purchased some land for him there as he wanted to farm. He reportedly arrived at the farm during the night, sick with throat troubles and piles. When he was able to start working he often had to quit work because of piles. He often complained of lower bowel pain and passed blood. John's home was his father's home.

1869. circa this year John quitted Illinois in favor of a piece of land located near Peru, Kansas. It was there - at Belleville, Howard County - the 1870 census caught up with the single farmer. Besides himself, John’s household included, Patrick Loobly, a 23 year old single male farmer and 21 year old G. Alman another 21 year old single male farmer. During this period Morris continued to have troubles with piles and a sore throat. Sometimes he could work all week. At other times he would be "down" (bedridden) for several days.

At some point prior to 1891 the Morris clan departed Kansas and moved into the Indian Territory - present day Oklahoma. Exactly when they arrived there and when they removed is not documented, but the Morris' were in Arlington, Washington Territory by June of 1891 when they settled on 160 acres of homestead land in or near Arlington, Snohomish County, Washington.  As a former Civil War soldier affiliated with The Grand Army Of The Republic, John likely learned of such land opportunities available to former Union soldiers through that organization.

On March 30, 1892 John made his official homestead filing. The following day he paid the necessary $6 fee. Just over three years later, on 6/30/95 he filed his "notice of publication for homestead" which was run in Arlington's newspaper, The Haller City Times, for the next six weeks. On 9/7 the following was noted regarding the homestead: Arlington, WA Claimant age 50. Settled 6/91. Built house = 4 rooms, 3 doors, six windows. Built with split cedar and other lumber. 3 acres cleared and cultivated. 4 acres slashed and partially cleared. Total value $600. Lived there continuously with wife and 8 children. Absent from claim about 3 months each year to make money to live on. When absent wife and children remained on claim.  Farm land with fir, cedar and hemlock. Crops cultivated 4 seasons. On 3/16/96 John's ownership of the homesteaded land was approved by the U.S. Government.

The census for 1900 found the Morris family firmly settled on their homestead in Washington which, by then, had achieved statehood. The household included John, his wife and seven of their eight children. Missing was daughter Mae who would have been about 20 or 21 years of age by that time.

As of 2/16/03 John had begun seeking a U.S. Government disability pension based on ailments which he traced back to his days of Civil War soldiering.  On the aforementioned date an Arlington doctor noted that Jon claimed to be suffering from disease of the throat which went back to an 1864 bout with diphtheria, piles because of the flux in the winter of 1865; disease of the stomach and liver from about ten years (ago) and a weak heart. The doctor rated the severity of the heart problem at 1 - 18; piles at 2 - 18; throat problems 1 - 18; enlarged prostate 1 - 18; stomach issues 2 - 18. general debility at 1 - 18. He noted that none of the physical problems were due to bad habits.  In 1906 fellow Arlington area Civil War vet George D. Wallace appeared as a witness on one of John's pension request documents and, although it took a while, on 2/6/07 former Private John W. Morris was granted a $12 monthly pension stipend. The dollar amount would later increase to $17 per month and would remain at that level until his passing.

1910. Another census. This one noted the Morris address as Armstrong, (2.5 miles north of Arlington) Snohomish County, WA. Within the household at the time were John, now 66, Louisa (55/56) and children Arthur, Winnie and Queenie. John was noted as farmer and Union Army soldier.

On 5/24/24 John last received a pension payment. He died suddenly the evening of 5/27 and was buried in Arlington's Harwood Cemetery.

Shortly following John's death it appears Louisa began the paperwork process to receive at least a portion of her late husband's military pension. During the early stages of this ordeal the U.S. Bureau of Pensions inquired if any members of the now widowed Louisa's family had served in the armed forces between 1917 and 1922. The answer was yes as son Earl had, during WWI, served in Co. "B" 18th Infantry American Expeditionary Force. He had been discharged 7/16/19.

Louisa's pension request must not have been going well as on 10/6/24 Washington State Representative Lindley H. Hadley (2nd Dist. Rep.) of the U.S. House of Representative sent a letter to the Commissioner of the Bureau of Pensions which read, in part, as follow: "I am advised that an application for pension was filed last June by Mrs. Louisa Morris widow of John W. Morris who was pensioned.....but she has heard nothing from it. Neither has she received the pension due her husband at the time of his death. Please advise on present status of claim. "At some point thereafter Louisa was pensioned at the rate of $30 per month.

Louise died 12/19/26. She was buried in Arlington's Harwood Cemetery beside John.