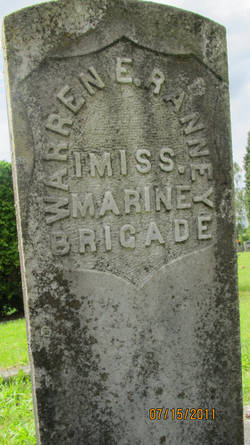 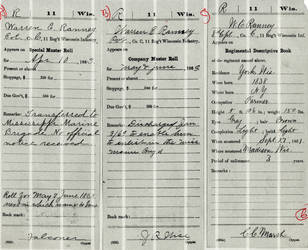 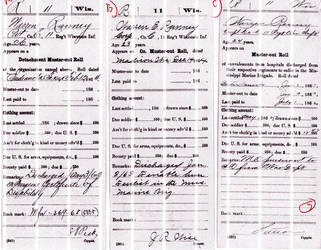 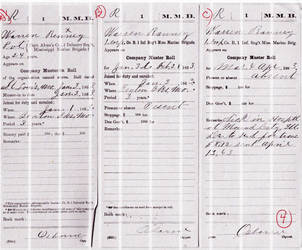 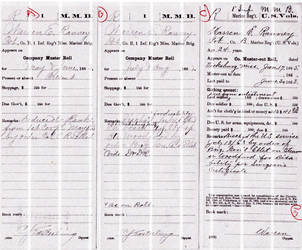 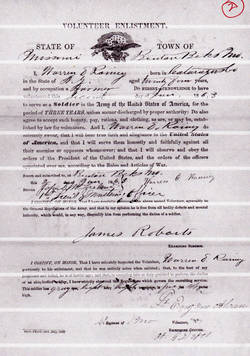 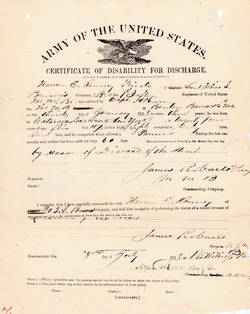 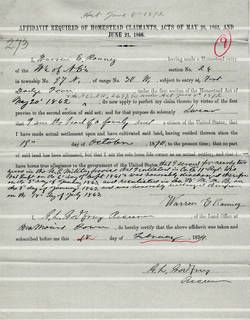 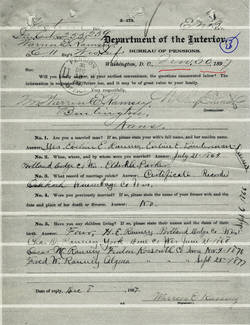 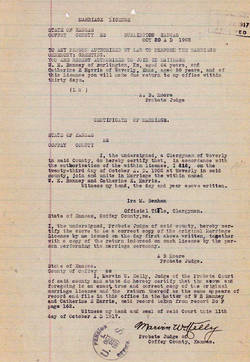 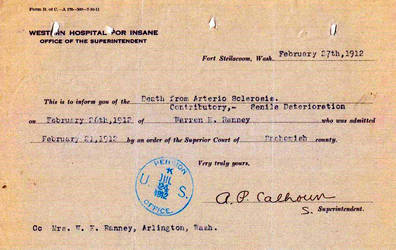 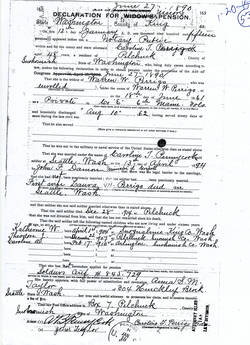 This three year western theater regiment left the state of Wisconsin just over one month after being mustered into Federal service. Its first assignments were performing railroad guard duty.

First action for the 11th came at Bayou Cache, Arkansas. After this it was stationed along the Mississippi River until the spring of 1863 when it was sent to take part in the siege of Vicksburg, MS. During this period it was in the battle of Port Gibson and received a special compliment for its splendid service.

The regiment was next engaged at Champion's Hill, MS and at Big Black River as the forces of Union Gen. U.S. Grant moved toward Vicksburg. In the Big Black action the unit led the charge which carried the enemy's works and captured several hundred prisoners.  Once at Vicksburg, the 11th suffered heavy losses as they attacked the city across open ground which was swept by Rebel bullets. Several months were then spent in arduous though uneventful campaigning around the city.

With over three quarters of the regiment re-enlisting, a brief visit home was followed by the now-veteran organization was sent on an invasion of western Tennessee and northern Mississippi. This duty was followed by an outpost assignment at Brashear City, LA.  Skirmishes with Confederate cavalry as well as scattered bodies of infantry, prevented the Rebels from amassing their troops in the region and also broke up a smuggling ring.  At Fort Blakely, Alabama, the last combat engagement for the 11th, the unit was among the first to plant its colors on the enemy parapet while facing a murderous fire.

While no written history apparently exists for the Mississippi Marine Brigade; it was reportedly formed in early 1863 by the U.S. Navy drawing troops from infantry - and perhaps some cavalry - soldiers from various Union regiments.  The role of the force was to work in conjunction with the Federal gunboats that plied the Mississippi River and its tributaries. In December, 1864, with the rivers secured, the force was disbanded because its services were no longer required.

According to available documents, Warren Ezrum Ranney was born 3/14/38 in Perrysburg, Cattaraugus County, New York. This community is in the southwest portion of the state.  He was the middle child of three born to Lyman Ranney (b.1794) and his second wife Louisa (nee Toles no b.d.) Ranney. Warren's known blood siblings were: Diana (b. 1831) and DeWitt Clinton (b. 1840).

There was also a Franklin Ranney (b. l835 NY).  What is unclear is whether he was a full blood brother of Warren through Lyman and Louisa, or a half sibling from the union of Warren’s father and his third wife, Maria.

Warren's father had served his country as a private in the U.S. Army during the War of 1812. As far as can be determined, except for this military service, Lyman was always a farmer.

Most likely it was less than twelve calendar months after the 1860 census that Warren joined the U.S. Army. On September 16, 1861, the War of the Rebellion was only scant months old. His enlistment locale was York, WI. (Note: While in the army Warren's name would, at least one time or another apparently appears as Wm. Ramsey).

During his first nine months in the service all went well for Corporal Ranney. Then, things changed. Daniel Lincoln, a commissioned officer and adjutant for the 11th later explained what happened:” On or about the month of June '62 at Batesville, Arkansas (cpl) Ranney came down with the bloody flu or diarrhea and piles.  Like a good soldier he had endured much hardship and exposure and shortly being so taken had been compelled to draw rations of meal (meat?) and that.....he was much debilitated and run down. (As a direct) consequence of said sickness I excused said soldier from non- com(missioned) officers drill for two or three days (but) on the fourth day of July, 1862 said soldier had another attack of the same and again had to be relieved of duty.”

“After the regiment moved from Batesville to Helena, Arkansas....said soldier was on fatigue duty to unload crackers from a boat or rather from the levy to a warehouse in the night.  While so carrying a box of crackers said soldier slipped and fell and just how it was whether the box fell on him or he struck the small of his back when he fell...he was badly injured through the hips and (right) thigh. (As a result of this injury) he was moved to Old Town Landing and through my advice was transferred to a boat for duty as a guard, he being placed in command  as an easy duty as he was not regarded as fit for duty. He remained there only a few days (before he) was sent back to (the) regiment (but) three days later was sent to a Mound City, IL hospital where he remained until discharged to reenlist in the 1st infantry regiment MMB.”

Corporal Ranney's discharge and reenlistment came about on January 1st (or the 3rd), 1863 while he was convalescing at Benton Barracks located near St. Louis, MO.  Discharged as a corporal, he entered Captain Aleau's company (later co. "B") of the 1st regiment Mississippi Marine Brigade as a private soldier.   A t the time Private Rainey’s vital stats were noted as follows: 5'10.5", 150 lbs., grey eyes, brown hair and light complexion.

Despite his time in the hospital, convalescent facilities and a unit change, private Ranney would not be found fit to continue service in the army.  As such, on July 18, 1863 while aboard the U.S. hospital steamer Woodford near Vicksburg, MS he was granted a disability discharge because of being unfit for duty the past 60 days. The basis for his debility was (chronic) disease of the heart and his hip injury.  Interestingly, one day following his discharge he was granted a $4 per month U.S. Government disability pension which appears to have immediately been raised to $8 per month.

Daniel Lincoln once again:” (After Ranney left the (11th) I did not see anything more of said soldier until he was discharged (from the MMB) because of heart disease....(At that time) he was very poor and weak.....(to such a degree that) I expressed doubt of his ability to get home.”

But, get home to Wisconsin Warren Ranney did! However, exactly where that "home" was located within the state is not documented.

As noted by the birthplaces of the Ranney children, farmer Warren and his wife made some geographical moves during their family-raising years.  The first being within the state of Wisconsin and the second to the state of Iowa. The family is first noted in Iowa in 1870 where their initial place of settlement may have been in or near the community of Fenton, Kossuth County where son Oscar was born late that same year.  However, during the 1870 census they were also noted as residing in Algona, Kossuth County. It was in the latter community, county and state that Warren settled his family on homestead land on the 18th day of October 1870.  The following day he paid $14 for the 80 acre parcel on which he intended to live and farm for at least the next five years.

On February 18, 1874, some months shy of five years, Warren paid final homestead fees and received title (patent) on his land. By that date he had improved the tract as follows: built a 12' x 20' one story frame house with three windows and one door that was "comfortable to live in." Other improvements included having plowed and cultivated about 40 acres, built a stable for 10 head of cattle, dug 2 wells, planted about two acres of forest trees and about 70 fruit trees.  Total value of the land improvement: $700. In 1875/'76 Warren would expand his homestead holdings by purchase of an additional 40 acre homestead parcel adjacent to his existing property.

As the years passed Warren's old war-related physical debilities continued to plague him. That may be the reason that by the time of the 1880 census the Algona, Kossuth County resident was no longer farming.  Instead his occupation was noted as "steam engine engineer." This occupational notation would continue until at least 1895.

Warren's pension stipend continued to increase with the years. In December, 1877 it was upped to $10. On November 7, 1888 it jumped to $14 per month. On November 27, 1889 it moved to $24 per month and in 1891, based on earlier findings of him now suffering from stomach and bowel problems, spinal irritation and general debility it was increased to $30 per month.

While no census information exists on the Ranney's for 1890, 1895 found Warren and Eveline, along with sons Oscar and Fred residing in Burlington, Coffey County, Kansas.  Why the move there from Iowa had been made is not documented.  It was at that location that Warren's wife Eveline died on May 4, 1897.  Cause of her passing is not known.

1900. Another census.  This tally found Warren still living in Burlington, Kansas in the home of married son Oscar and his wife. Two years later, while he continued to reside in Burlington, in Waverly, Kansas Warren remarried to the twice wed/twice widowed Catherine E. Ferris/Harris (Nee Dwelbiss b. 9/24 or 25/44 Warren Co., PA.). She being a resident of Waverly, it was likely there the two remained until ca. 1908 when they removed from Kansas to Arlington, Snohomish County, Washington. In Washington,   according to the 1910 census, they took up residence with Warren's married daughter, Grace West and her husband Wade.  Once there Warren became a member of the E.M.Stanton Post #86 of the Grand Army of The Republic in nearby Haller City (Arlington).

By early 1912 Warren's mental health had taken a drastic turn for the worse. As a consequence, on February 21st of that year, by order of the Superior Court of Snohomish County, the Arlington resident was committed to the Western State Hospital for the Insane located in Steilacoom, Pierce County, Washington.  It was there, a scant few days later, on February 27th, that former Civil War soldier Warren E. Ranney died. Cause of death was noted as arteriosclerosis with senile deterioration contributing.  Burial was in Arlington's Harwood Cemetery.

Now began a new chapter in the life of Catherine Ranney. After Warren's passing she remained in the Arlington home of the Wades.  On July 12, 1912 she began the paperwork process to claim at least a portion of her late third husband's Civil War-based pension benefits.  The process, however, must not have progressed positively as Catherine ended up writing to U.S. Congressman Wesley L. Jones regarding her plight.  As a result, on October 23, 1916 during the 34th U.S. Congressional session Senate Bill S. 5786 dated 4/27/16 (calendar day 4/28/16) was introduced by Mr. Jones. Read twice and referred to the committee on pensions, the bill requested that the House and the Senate representatives of the U.S.....authorize and direct the Secretary of the Interior to place the name of Catherine E Ranney on the pension roll and pay her a pension of $12 per month. The pension was enacted, but at $20, not $12 per month. A year later, on October 6, 1917 that amount was upped to $25 per month.

Although the Wades departed Washington State for South Carolina at some point, neither they, nor Catherine Ranney can be found in the census for 1920.  A decade later, however, in 1930, the three were residing in Tampa, Hillsborough Co., Florida. It was there on September 19th of that same year Catherine died.  Her final resting place is not known.