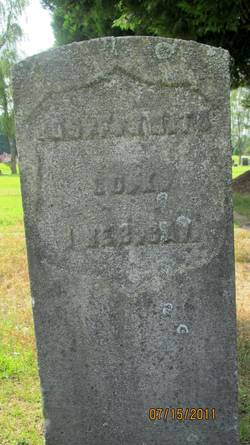 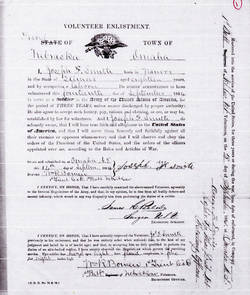 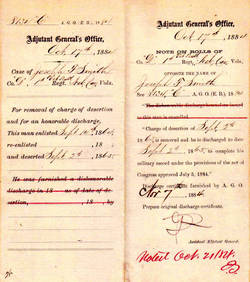 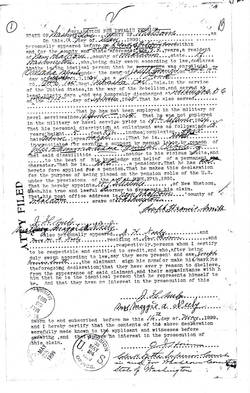 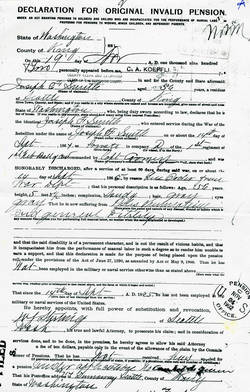 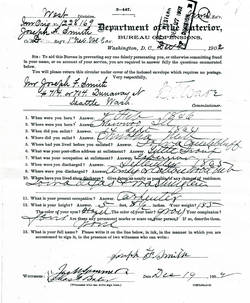 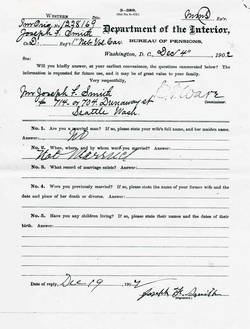 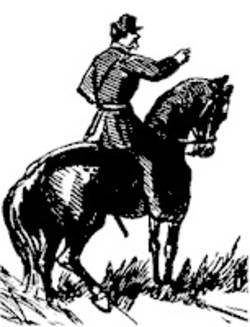 The western theater organization known as the 1st battalion Nebraska (veteran) cavalry was composed of four companies. It was organized in Omaha to serve for three years. From January, 1864 to April, 1865 it served in the Department of Kansas, District of Nebraska. Its exact duties with that department and territory are not documented.  The war over, on 7/18/65 it was consolidated with the 1st Nebraska Cavalry regiment and was mustered out with that organization on 7/1/66.

NOTE: As Private Smith's assignment to the 1st regt. NE cavalry came after the end of the War, a complete history of the unit will not be presented herein.

The 1st began the War as a three year infantry unit that was always assigned within the western theater's departments of Kansas and Arkansas. A war department order of October, 1863 changed the unit's designation from infantry to cavalry.

On 7/18/65, the Civil War having ended, four companies of the 1st Battalion Nebraska Cavalry were consolidated with the 1st Regiment Nebraska Cavalry which was then re-designated the 1st Regiment Nebraska Veteran Cavalry. Until final muster in 1866 this organization was sent out by detachments to different points within the Nebraska Territory to engage in scouting duties, escort duties as well as guarding stage coach and overland mail rouges.  During this period it was frequently engaged in skirmishes with hostile Indians.

Joseph Francis Smith was born 2/2/46 in Nauvoo, Illinois. His parents were Francis (b.1814 Nova Scotia, Canada) and Isabella (no nee b. 1819 Scotland.  In 1844 when his older sister, Margaret was born, the family was residing in Nova Scotia, but as evidenced by the location of Joseph's birth, they had immigrated to the United States sometime between '44 and Joseph's coming into this world. Also born in Illinois were Joseph's next two younger sibling brothers James (b.1848) and William (b. 1849).  The next three Smith children, Emma (b. 1854), Francis N. (b.1856) and Marshall W. (b. 1859) were born in Iowa where he 1860 U.S. Census found the family residing in or near Kane, Pottawattie County.   Likely the Smiths were farmers.

Although there is some indication that Joseph may have resided in Council Bluffs, Iowa sometime between 1860 and 1864, the first hard documentation on him stems from his enlistment in the U.S. Cavalry in Omaha, Douglas County, Nebraska on 9/14/64.  Even though he enlisted in Nebraska, he listed his address at the time as being Little Sioux, Iowa.  His vital statistics at the time of enlistment were: Age 18.7 yrs.; height 5'8/.5", florid complexion; hazel eyes and light/auburn hair.  His occupation was noted as "laborer." For enlisting he received a $300 enlistment bonus (bounty) of which he was initially paid $100. Joseph would later claim he had served in two companies in the 1st battalion, "C" and "D." Existing records, though, reflect only the latter.

Throughout the remainder of 1864 battalion muster rolls show Private Smith as being present for duty. No illnesses, injuries, etc. were also noted during that period.  The same hold true for the first half of 1865.

In July, 1865, the War having ended, the Union army was being reduced in size.  As part of this reduction the 1st NE Battalion of cavalry was merged (consolidated) with the 1st NE Regiment of cavalry. Again, all seemed well with Private Smith until September 2nd when, while assigned to Cottonwood Post in the Nebraska Territory he, as well as most of the others in his company deserted because their commanding officer would not release them and let them go home. (Note: On 11/7/84 the charge of desertion was removed and (former) Private Smith was honorably discharged from the U.S. Army retroactively to 9/2/65.)

Having separated from the armed services, albeit without permission, it appears Joseph returned to Little Sioux, Iowa. That was where the census for 1870 found he and brother, James living, and most likely, farming, together. (Note: Somewhere within this period, however Joseph may have settled for a time in Texas as this is one of the states/territories he would later say he lived in post-war.  Exactly when or where this may have been, however, is not documented beyond one notation.)

The census of 1880 placed Joseph, Sarah and Isa E./Isia/Isea in Little Sioux where they were farming.  A year later, however, in June, 1881 the Smith's departed Iowa and headed westward in a covered wagon drawn by a team of mules. That November, "after enduring many hardships" they arrived in Walla Walla, Washington Territory where they stayed during the ensuing winter.

In the springtime of 1882 the Smiths continued their travels, moving from Walla Walla to Sylvana, Snohomish County, Washington Territory via Portland, Oregon. Their arrival in Sylvana came in June. That fall the family purchased a small ranch on a waterway known as Hatt Slough. That parcel was then sold soon thereafter as the family took up a 200 acre homestead adjoining what later became the town of Arlington in Snohomish County.  In this virgin wilderness he built a small house of "split cedar" and "entered upon the task of clearing the land" for what, in time, became a good farm.

All seemed well with the Smith family. For one thing, they had a good homestead farm. Something, however, then went terribly awry as, ca. 1889, Joseph and Sarah separated, with the moving northward to New Whatcom (present day Ferndale) in Whatcom County where he lived with daughter Susie.  Joseph and Sarah did not divorce, but never again united.

Why the separation? No reason is documented, so we may never know.  Still, one hint may lie in the 1900 census which noted that Sarah, who maintained residence on the family farm, was assisted in maintenance duties by two farmhands, one of whom was the Canadian born Albert Cooke (b. ca. 1869). The significance of this name will be discussed later.

Interestingly,  in early 1902 Joseph, reportedly a carpenter by trade, then residing in the 700 block of Dunaway Street in Seattle, King County, Washington applied for a U.S. Government disability pension based on his period of Civil War soldiering  because he was then suffering from piles (hemorrhoids), rheumatism and "general debility" which prevented him from performing manual labor, would note - perhaps bitterly  - in the application paperwork that he had never been married and had no children!! While a monthly stipend appears to have been granted, the amount of that payment and the onset date are not known.  The only pension payment notation in available paperwork is that an increase requested in 1903 was rejected.

The Arlington Times newspaper dated October 6, 1906 reported that three days prior, Joseph Smith drowned near Vancouver, Washington. No details of the tragedy were available for the article and, more importantly, a recent search of the archives of the Vancouver Columbian newspaper could locate no mention of the death.

The October 6th news article went on to report that the remains, which had been identified by family still residing in Arlington, were to arrive in that community that same date for burial after services in the Methodist Episcopal Church.  Additionally noted was that (Joseph) "had a large and respected family at this place from which, however, he had been separated for several years." Burial was in Arlington's Harwood cemetery.

Although the exact date and year cannot be set down with certainty, sometime between Joseph's death and the census of 1910 Sarah remarried.  Her new husband was former farm hand Albert Cook/Cooke.

Following the death of Joseph and her remarriage, Sarah remained on the land at Snohomish County near Arlington. In 1926 a history of the area noted the following: (Sarah) lived in the split cedar house for eighteen or twenty years and then sold the place and bought twenty acres on an adjoining hill. Later, half of this place was sold and, eventually, the remainder.  (She) then purchased a house and three lots across the road where (she) Mrs. Cooke is now living.

Sarah Bingham-Smith-Cooke/Cook died on January 1, 1930. She was buried near Joseph and her children. Surviving her were daughters Isa/Isa/Isea, Christie, Susie and Allie.