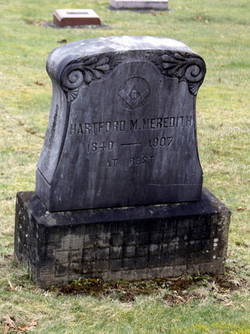 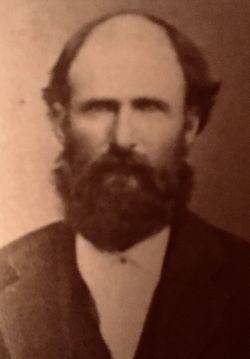 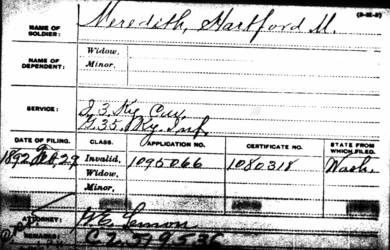 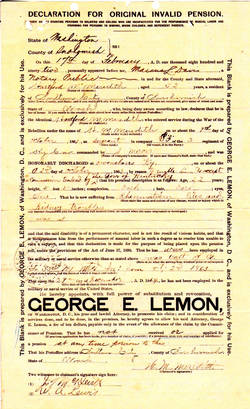 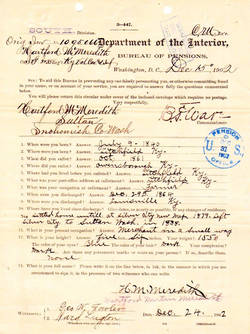 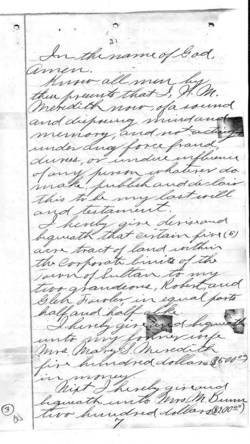 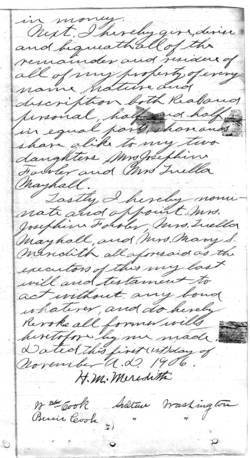 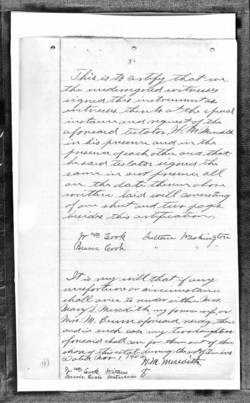 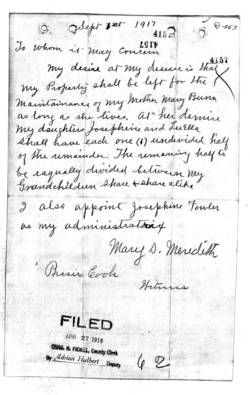 The 3rd, a three year western theater regiment, was actively engaged with Rebel forces around Owensboro and Calhoun, KY before it was mustered into Federal service.

After the fall of Ft. Donelson, TN on 2/16/62 the 3rd moved to Nashville. From there it marched to Pittsburg Landing where a portion of the unit was actively engaged during the second day's fighting (April 7th) at Shiloh. After that it took part in Union movements upon Corinth and Luka, MS.

In 1863 the 3rd was engaged at Wildcat Creek, KY. It ended the year with re-enlistments and furloughs.

In 1862, the 3rd as a veteran organization, joined cavalry operations focusing on Atlanta, GA. During those movements it was involved in lively fighting at Resaca (5/13 – 15/64), Lay's Ferry, Gideon and Calhoun.

Atlanta was captured on 7/22/64.After the city’s fall 3rd took part in Union Gen. W.T. Sherman's march to Savannah and the sea.

1865 saw the regiment march northward through the Carolinas. In April, near Lexington, NC it was mustered into history.

The 35th was a one year, western theater “mounted” regiment. Although it was organized in September, 1863 and mustered into Federal service in October of that year, the first history we find on the unit is from August, 1864 when, after a long and tedious march with other troops and various skirmishes with the enemy, it succeeded in driving the forces of Confed. Gen. Adam Johnson out of Kentucky and into Tennessee.

Following the Kentucky/Tennessee maneuvers the unit returned to Lexington, KY.  From there it joined in the first Union expedition against Saltville, VA. During this period the 35th lost 21 men.

The Saltville expedition being completed, the regiment returned to Lexington, KY on 11/5/64. From there it was ordered to Louisville where it was mustered out on 12/29/64 after having fought numerous skirmishes with Rebel guerillas in various parts of Kent

Hartford Martin Meredith was born in 1840. No specific month or day dates of birth have been located in available documentation.

The location of Hartford's birth was Grayson County, Kentucky. His parents were Bradford (b. 1820 Grayson, KY) and Rachael (nee Decker b. 1820 Grayson, KY) Meredith. Bradford and Rachael reportedly produced seven children only four of whom, survived. Of those four, we know the names of only two, Hartford being one, his younger brother (Alonzo) Green / Green (Alonzo) (b. 7/4/43 KY) was the other.

By 1850 Hartford's father had died and Rachael had remarried. Hartford's new stepfather was William Vinson (b. 1807 KY), a farmer.

In 1850 the Vinson family home in Grayson County, KY included William and Rachael as well as a two year old child also named William Vinson. (Whether this is a child of William and Rachael or the product of a previous marriage for Mr. Vison is not known.) Also in the household were Rachael's sons Hartford and Green as well as a ten year old William Decker and 24 year old William Meredith.  The latter was possibly a brother of Hartford's late father.

By the time of the U.S. Census of 1860 Hartford had a farm of his own in Leitchfield Grayson Co., KY. Under his roof as housekeeper was his mother Rachael Vinson and three Vinson children: William S. (17). John T. (10) and Benjamin B. (6), the latter two definitely being Hartford's half-brothers.

In early October, 1861 Hartford enrolled in the U.S. Army. His enlistment organization was the 3rd Kentucky Mounted Rifles. That unit subsequently became Company “I” of the 3rd Kentucky Cavalry.

At the time of enlistment we gain a glimpse of Hartford Meredith the physical man. He as described as 5’6” in height, having a dark complexion, dark eyes and dark hair. Occupationally Corporal Meredith was a farmer.

Military life proved to set well with our corporal. Firstly, on 4/1/62 he was promoted to the rank of 2nd sergeant. Secondly, by July/August, 1863 he was detached from field service with the 3rd and sent back to Kentucky to aid in the recruitment of a new mounted infantry regiment. That being accomplished, on 10/2/63 Sgt. Meredith was mustered out of the 3rd on orders to accept a one year captaincy of Company “G” in the new 35th Kentucky (Mounted) Infantry.

Captain Meredith’s period of service with the 35th appears to have gone smoothly. While the muster rolls of Company “G” did not always note his presence, if the present/absent column contained a “not stated” entry, it also noted that the captain had “signed off” on the muster tally.

The only time Captain Meredith was noted as not being present was in late November, 1864 when he requested and was granted a 20 day leave of absence. Although the reason for the request was not defined, somewhat cryptically the request was “under instructions from Head Quarters Military Department of Kentucky.” The leave was granted.

Interestingly, although maintaining the rank of captain, upon returning from leave Captain Meredith did not remain in military service. He was mustered out of the army on 12/29/64.

Three years of war behind him, Hartford returned to the civilian world. As with many Civil War vets, however, exactly where he touched down is not documented.

That Hartford had been in New Mexico prior to his marriage is highlighted by the fact that on 9/30/79 he received the patent (deed) to a homestead parcel located there. The homestead, likely based on his period of Civil War soldiering, would be his, Mary's and the children’s’ home until they moved to the Pacific Northwest. More on this later.

Although a homesteader, Hartford was more than just a farmer.  An 1880 New Mexico census tally noted that he was a "general merchant." Another for 1885 identified his occupation as "banker."

For whatever reason, circa 1888 Hartford and family pulled up stakes in New Mexico and moved to the Puget Sound region of Snohomish County, Washington Territory. Here they settled in the community Sultan City located along the banks of the confluence of the Sultan and Skykomish rivers. Also making the move to the Pacific Northeast and settling next door to the Merediths were Mary's parents David and Mary Bunn.

In Sultan Hartford and his father-in-law reportedly set about building a small river steamer which they named the "Minnie M." after Hartford's wife. Further, on 7/12/94 H.M. (as he was sometimes known) became Sultan's postmaster.  Finally, when on 6/10/05 the small logging community of Sultan officially incorporated as a town of the fourth class, Hartford became the city's first mayor.

Hartford M. Meredith, a pioneer resident of, and long- time merchant in Sultan, died there on 1/6/07. The cause of his death was pancreatic cancer. At passing the 66 year old former Civil War soldier was receiving a $6 per month U.S. Government disability stipend based on his periods of military service.

Hartford’s  1/11/07 obituary in the Monroe Monitor newspaper characterized H.M. as one of the most prominent residents of the east end of Snohomish County (and one who) stood high in the councils of the people.(He was) highly respected and beloved by all  who knew him.”  Burial was/is in the Sultan Cemetery.

After Hartford's death Mary remained in Sultan. In 1910 the widow Meredith and her mother were residing together.