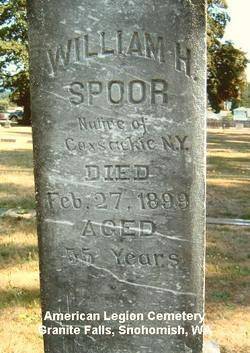 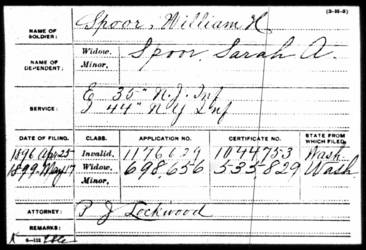 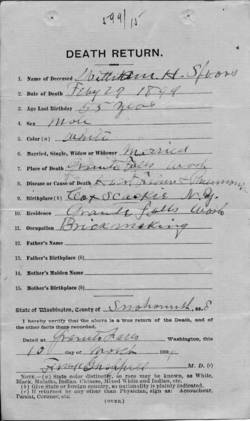 The 35th, a three year western theater regiment, was recruited chiefly from the counties of Essex and Hunterdon. Receiving Federal Muster in September, 1863 shortly thereafter it departed the state for Washington City. From there it was transferred south.

In February, 1864 the regiment participated in the Meridian Expedition. During thirty two days the unit skirmished with the enemy and lost a few men. Following this experience it moved into the campaign to capture Atlanta, GA.

In early, 1865 the 35th began marching northward through the Carolinas. With the surrender of Rebel forces commanded by Confed. Gen. Joseph E. Johnston, the regiment moved on to Washington City where it received new Zouave uniforms. Final muster came a short time later.

William Henry Spoor was born in 1844. No birth month or date is available. His place of birth was Coxsackie Greene Co., New York.

In September, 1863 William joined the U.S. Army. Without the availability of his military  records  all we really know about his period of service is that he rose from the rank of private to that of corporal, but had returned to being a private by the time of his being mustered out and discharged.

It appears William was residing on his parents' farm when he entered the military. With his return to civilian life he also returned to the family farm.

Post-Civil War, the next we learn about William is that on 3/29/80 in Spring Lake, Ottawa, MI he married. His bride was Sarah A. Gray (b. 8/17/52 MI). After their marriage the couple settled in Michigan. Exactly where is not documented.

As noted by the birth states of the Spoor children at some point in time between the birth of Helen (1884) and that of George (1891) the Spoors quitted Michigan and removed to Colorado. Exactly when and why the move was made is not known.

From Colorado the family moved to the Puget Sound region of western Washington Terr. /State. Once again, the when and why for the move are not documented. In the Pacific Northwest they settled in or near the Snohomish County community of Granite Falls.

William H. Spoor, whose occupation was brick making, died on 2/27/99. He was 55 years of age. Death came to him at home in Granite Falls. No information is available pertaining to his passing. Burial was/is in the Granite Falls American Legion Cemetery.

* This "By Request"-style birth - to - death biographical profile was written in April, 2020 during the Covid 19 virus medical pandemic. Because the National Archives in Washington, D.C. were closed, it was created without the benefit of military, pension and other veteran-related files. Those files will be obtained and pertinent information found in them added to the biography at a later time.