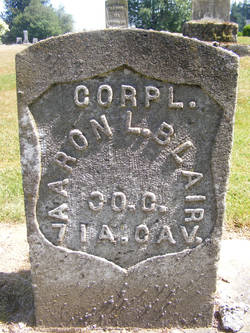 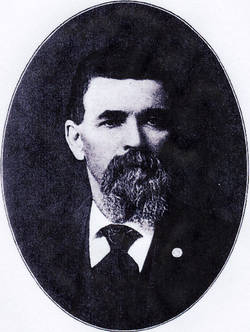 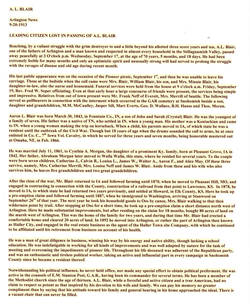 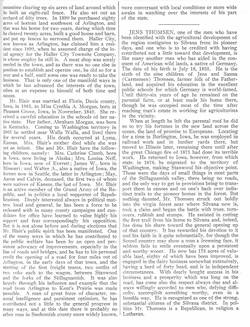 The formation of the 7th cavalry proceeded slowly but was finally completed during the summer of 1863 at Camp Hendershott, Davenport, IA, by a consolidation of companies previously assigned to other units.

During the three years of its existence the 7th had elements scattered over a wide area with each company engaged in duties required "on the Frontier."  Constantly threatened, and frequently invaded by a savage enemy the 7th garrisoned posts, escorted trains, protected emigrants, guarded line of travel/telegraph and had frequent battles with Indians.

ED. NOTE: The original birth – to – death biographical profile on Aaron Blair was written during the early years of the Civil War Veterans Buried In Washington State project. As such it was limited in both size and available research sources.

The profile which follows was created in July, 2018. While it contains much more information than the original, it still suffers from the depth of detail that, today, can be gleaned from archived files located in the National Archives in Washington, D.C.

On July 11, 1861 in Davis IA Aaron married Cynthia A. Morgan (b. 11/1842 IA) the daughter of Abraham Morgan a native of Kentucky, whom had moved to Iowa early in life.  The marriage would be the first and last for both. Mr. Morgan also removed to Washington by 1863.

Though but 19 years of age when the drums of war sounded a call to arms, Aaron enlisted in the Union Army. His unit was Company “C” of the 7th Iowa cavalry.  Despite serving three years and seven months in the field, Aaron survived our nations bloody four year conflict and returned home to his wife and family in Iowa.

Returning home from the war Aaron became a farmer in Lick Creek, Davis County, IA a pursuit which he followed until 1870. In that year the Blairs moved to Pleasant Hill, MO where Aaron was involved in building a railroad between that place and Lawrence, Kansas.

In 1878 Aaron moved his family back to Iowa and settled in Howard, Elk County, Kansas. There he took up a pre-emption homestead claim and once again became a farmer.

1887. This was the year the Blair family immigrated to Washington Territory, arriving at Stanwood in Skagit County on September, 26th. The next year he took his household goods, by canoe, to Oso, south of there in Snohomish County. While Aaron was canoeing Mrs. Blair was walking to that wilderness point by trail.

After stopping at Oso for a short time Aaron took up another pre-emption land claim a short distance north and west of Arlington, Snohomish Co.  Here he made substantial improvements, but after residing on the claim for eighteen months , bought 80 acres of land on the marsh west of Arlington. This was the home of his family for two years. During that period he erected a comfortable home and cleared 20 acres of land.

In 1892 Aaron moved his family into Arlington, or rather the part of Arlington then known as Haller City. There he engaged in the real estate business as the agent of the Haller Township Company with which he continued to be affiliated until his retirement from business on account of his health.

Aaron L. “A.L.” Blain died in Arlington on 9/17/13. The causes of his death was old age and disease. Surviving were his wife, three of his children, five grand-children and two great grandchildren.

Long involved in the Grand Army Of /the Republic and having served several times as the commander of the Edwin M. Stanton Post in Arlington Mr. Blair requested to be buried at the Snohomish, Snohomish County, WA’s Grand Army of The Republic (G.A.R.) Cemetery amongst the comrades with whom he had served so faithfully.

After her husband’s passing Cynthia remained in Arlington. She died on 7/22/15 and was/is buried next to Aaron in the Snohomish G.A.R. Cemetery.