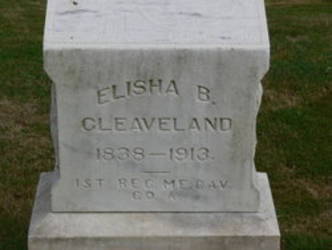 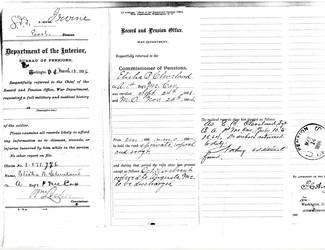 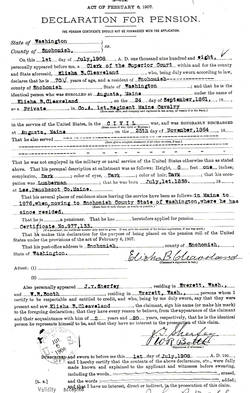 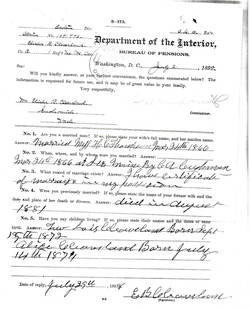 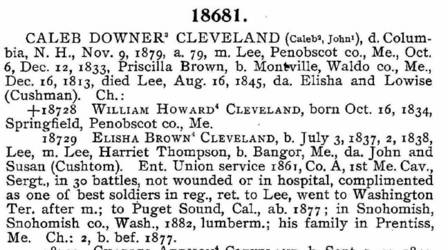 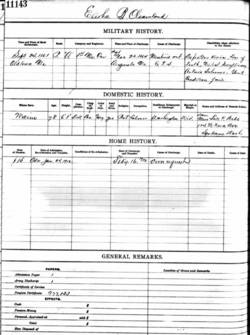 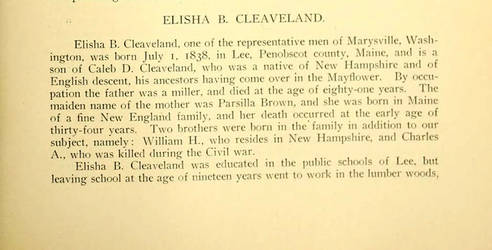 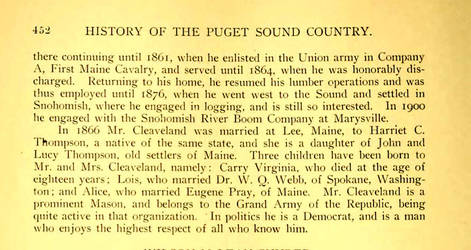 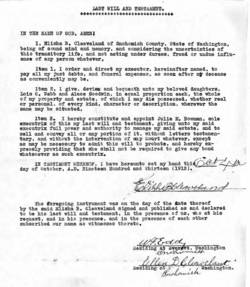 Elisha B Cleaveland Will dated 1913 WA

A three year, twelve company, eastern theater regiment, the 1st was raised “at large” within the state of Maine. It remained “in state” until spring, 1862 when it moved into Virginia where the unit was split in two. In May one portion of the regiment saw first action in at Middletown in the Shenandoah Valley while covering Union Gen. Bank’s retreat to Williamsport.

The resulting loss was 176 horses and equipments. As a complete entity, the 1st was engaged that July at Cedar Mountain. Engagements at Brandy Station and Second Bull Run followed. The severity of service to which the regiment was subjected can be inferred from a bare recital of battles in which the 1st participated between late 1862 and early 1865: Fredericksburg, Aldie, Middleburg, Upperville, Gettysburg, Shepherdstown, Sulpher Springs, Mine run, about Richmond, Old Church, Todd’s Tavern, Ground Squirrell Church, Hawes’ Shop, Cold Harbor, Trevalian Station, St. Mary’s Church, Deep Bottom, Reams’ Station, Wyatt’s Farm, Boydton Road and Bellefield.

Following the November ’64 expiration of original enlistments, remaining veterans of the 1st, along with new recruits, joined with the 1st D.C. cavalry to participate in the closing battles of the War. Total wartime deaths within the regiment from all causes: 508 officers and enlisted men.

Ed note: The original birth – to – death biographical profile of Elisha B. Cleaveland was created during the early years of the Civil War Veterans Buried In Washington State project. The preceding profile which was written during July/August, 2018 contains many more details than the original, but still falls short of the informational depth found in more recently constructed biographies found within this website.

*NOTE: Elisha’s surname has been noted as Cleaveland, Clevland, and Cleveland.  However, since all documents signed by the veteran feature Cleaveland, that spelling is used herein.

Elisha had two siblings, an older brother and a younger brother. Both served in the War Of The Rebellion during which all three were members of the 1st Maine Cavalry.  Older brother William Howard (b. 10/16/34 Springfield, Penobscot Co., ME) William was to serve in and survive the Civil War as did Elisha. He is buried in Grand Army Of The Republic (G.A.R.) Cemetery in Snohomish, Snohomish County, WA. Younger brother Charles Addison (b. 1844 ME.). Charles was not so fortunate.  Captured by the enemy on 5/24/62 at Middleton, VA, he died later that same year in a Richmond, VA prison. His place of burial is not known.

U.S. Census data between 1840 and 1860 places the Cleaveland family in Lee Penobscot, Co., ME. In 1840 the household was comprised of four white persons – 2 adults, 1 male 5 – 9 and one male under 5.  This would have been Caleb, Pricilla, William and Elisha. Ten years later, in 1850 Elisha, who has by now been joined by younger brother Charles, are in a home headed by a farmer named Joseph Hanscomb and “several other people.” No mention is made of Caleb, Pricilla or William. Finally, in 1860 Caleb is once again the head of a household that includes his three sons and an adult identified as George H. Haskell. Again, there is no sign of Pricilla. As Pricilla did not die until 8/16/45 in Lee Penobscot Co., ME, obviously she and Caleb had separated and/or divorced.

Elisha received a public school education in Lee Maine. At the age of nineteen he left school to work in Maine’s timber industry.

On 10/1/62 Elisha enlisted in the 1st Maine cavalry.  His service was in Company “A.”  At the time of enlistment the dark complexioned Elisha was not only above the average age (26.7 yrs.) of most Civil War soldiers, at 6’1” tall he was also well above the average height of 5’7”.  His occupation was listed as “lumberman.”   Elisha was, undoubtedly, a big strong lumberjack working in the forests of Maine.

Private Elisha Cleaveland’s military career appears to have been a positive experience.  Firstly, he quickly moved to the rank of corporal and then sergeant.  The latter position he held until discharged.  Secondly, despite his unit’s intensive combat history, there are no records of his being wounded.  Thirdly, his only brush with illness was a six day bout of diarrhea (July 10-16, 1864) from which he recovered and returned to duty.

In 1876 Elisha and family departed Maine and moved three thousand miles west to the Puget Sound forests of western Washington Territory. Exactly when the move was made in ’76 is not known. The family’s community of settlement was Snohomish, located in Snohomish County.

Exactly what happened to the Cleaveland family after they arrived in the Puget Sound area is not clear. The U.S. Census for 1880 simply noted Elisha, married, but apparently living alone in Snohomish. The whereabouts of Harriet and the girls is not known. Harriet died in August, 1881. Her place of burial is not known.

[Note: There is some indication that following Harriet’s passing Elisha may have remarried to one Adah Clark who bore him a son, Elisha Cleaveland, Jr. However, no solid documentation has been found to support this union or birth. If there was an Adah and Elisha, Jr. their fates are unknown as no mention is made of either in Elisha’s obituary or will dated 1913.]

An 1885 census notes that E Cleveland & daughter Alice were living in Washington. An entry in 1887 notes Lois Cleveland 16 & Alice Cleaveland 14.  E B Cleveland, 48 lumberman, is also listed but not with girls.

In 1910 Lois Cleaveland was in the eastern Washington city of Spokane. Spokane is located in Spokane county along the Washington/Idaho border.  Elisha’s whereabouts are unknown.

On 1/24/12 Elisha was admitted into Sawtelle, California old soldiers’ home. He remained in that facility until 9/16/12 when he requested a discharge. At that time he listed his married daughter, Lois Webb, as his contact person.

On 10/27/13 the Everett Herald noted that Elisha Cleaveland, former lumberman and cavalry trooper had died the previous day at the home of his niece, Mrs. Julia Bowman.  Cause of death was listed as “senile decay.”  Dead at the age of 75 years and 4 months, he had been receiving a $25 monthly government disability pension stipend based on his Civil War soldiering.