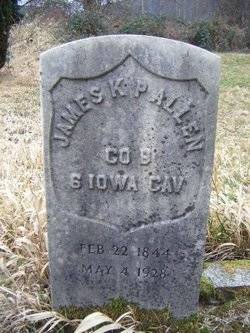 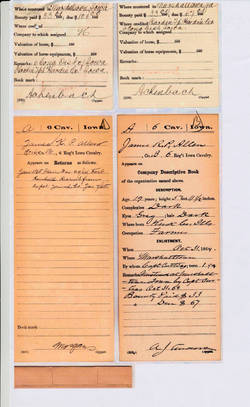 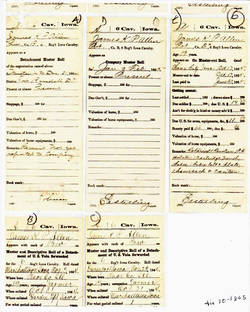 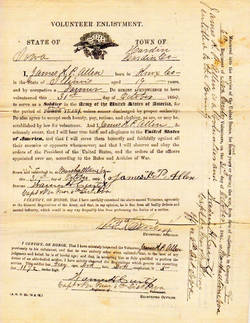 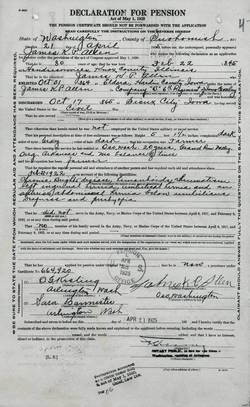 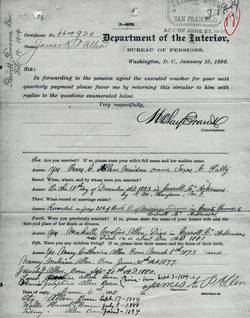 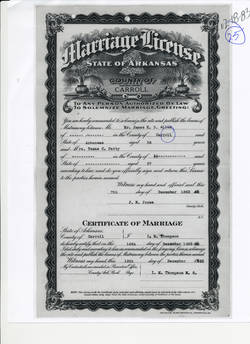 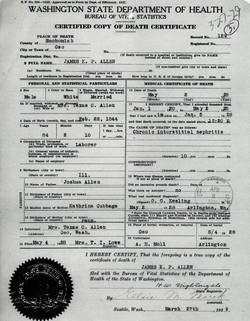 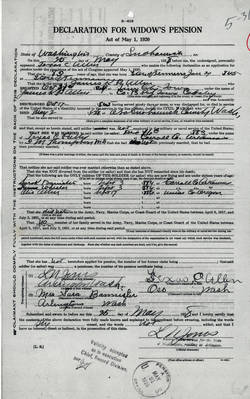 This regiment was recruited in different parts of Iowa encompassing a wide belt of country extending from the far northeastern to the southwestern parts of the state.  It rendezvoused near the city of Davenport where eight of the companies we mustered into U.S. service on 1/31/63. Three additional companies were mustered in a few days later with the twelfth being inducted on March 5th. The 6th, at this time had a few more than eleven hundred names on its rolls, but that total was constantly increased by new enlistees. As such, not long afterwards when it left the rendezvous for active service it was nearly up to the maximum strength (1200) of a cavalry regiment.

The 6th, during its history, served entirely in the war against the Indians and its record in the field brought no discredit to the name of Iowa soldiers. It had hard marches, far away from the comforts or advantages of civilization; fought barbarous foes - usually in overwhelming numbers - and was always victorious.

The 6th was mustered into history on 10/17/65 without ever having fired a shot at Johnny Reb.

James K. Polk Allen was born 2/22/45 on his parents’ farm located three miles outside Hendersonville in Knox County, Illinois. He was the first child born to Joshua (b. 1822 KY) and Catherine T. (nee Cubbage b. 1822 PA or MD) Allen. While there is no documentation available pertaining to the name associated with the letter K., most likely it stood for Knox. Not only did Knox tie in with the county in which James was born, but it and newborn's first name when combined with Polk reflect the name of the newly elected/inaugurated U.S. president, James Knox Polk. James would later be joined by at least four younger siblings: William (b. 1847 IL), Nancy (b. 1849 IL), John W. (b. 1851 IL) and either another brother or sister identified in U.S. census data only by the initial "C" (b. 1856 IA). As denoted by the birthplace of “C”, sometime between 1851 and 1856 the Allen family had quitted Illinois for a new farm located in or near the community of Pleasant located in Hardin Co., IA. By 1860, while still in Iowa, the family was farming in Ellis, also located in Hardin County.

On 10/31/64 19.3 year old James and William Allen, his 17 year old cousin, enlisted in the U.S. Army. While data entries differ as to the exact town where the enlistments took place, what is known for certain as they were within Hardin Township of Hardin County, Iowa. The young men's period of service was to be one year. Their unit of assignment was company "B" of the 6th Iowa Cavalry.  For enlisting the young privates each received a $100 enlistment bonus or "bounty" of which $33 was paid immediately with the balance to come in later increments. At enlistment/muster James' vital statistics were noted as: Height = 5'11.5", Eyes = gray, Hair = dark and Complexion = dark. His occupation was listed as "farmer." On 12/29/64 the two Allen privates joined their regiment at Fort Randall in the Dakota Territory. For James, his period of enlistment appears to have been fairly benign. No illnesses or wounds are noted in his military service records. While service records for William are not available, his service tenure, too, appears to have been without serious problems.

James and William were mustered out of Federal service at Sioux City Iowa on 10/17/65. For his part James received the balance of his enlistment bonus ($66.66) plus whatever pay he may have had coming. He then opted to pay the U.S. government $14.77 in order to retain his revolver, pistol belt, holster, cartridge pouch, saber belt and plate, haversack and canteen. Whatever became of these accoutrements is not known.

Travelling together after leaving the service James and his cousin spent one night with a family in Albion, Iowa. How long the two remained together after that is not known.

In later years James would note that from 1865 to 1870 he resided in Missouri. Exactly when and why he landed there is not known. As far as can be determined his community of residence was Warrensburg in Johnson County. Also, his means of subsistence during this time is not documented. Likely, however, he was farming in some capacity.

James cannot be located in the 1870 U.S. Census, but if his comment regarding residing in Missouri from 1865 to 1870 is to be believed, during the latter year he departed Missouri for the state of Arkansas. There he apparently settled in Scott's Prairie in (later renamed Green Forest) in Carroll County.

At some point following the end of the War and 1871 James married to Mahala Evelyn Horton (b. 1844 TN). While birth years are conflicting, the couple's first and second children - daughters Mary Catherine  and Nancy Malcine  were born in 1871 (or'73) and 1875 (or'77) respectively. Also unclear is why, if the couple was residing in Arkansas, the first birth took place in Illinois and the second in Kansas. Perhaps Mrs. Allen travelled to those locales to be with female relatives or friends who could assist with the births. The Allen's third daughter, Lillian, was born in 1878 in Arkansas.

The U.S. Census for 1880 placed the Allen family - James, Mahala and their three daughters - in Yocum, Carroll County, Arkansas. Two years later, on 9/20/82, the Allen's one and only son, Joshua J., was born. That birth, too, was in Arkansas.

Tragedy struck the Allen household when Mahala died. The month appears to have been December. The location was apparently northern Missouri. Documentation is unclear pertaining to the year this loss occurred. One notation points to 1880, another to 1881. And yet, Joshua was born in September, 1882. If Mahala died in December of that year most likely her passing was the result of complications stemming from the recent childbirth. Whatever the details of dates etc., James was suddenly a widower with four young children to nurture and raise.

On 12/16 or 18/83, in Carroll County, AR James remarried. His new bride was the previously unwed Texas Catherine Patty (b. 1/21 or 27/45 TN). While she would later indicate this marriage came three years after the death of Mahala, the timeline presented herein points to one year having passed. During that one or more year/years was James caring for his infant son and slightly older daughters himself? Likely we will never know. Again, what is known is that on 9/3/84, nine months from the date of their wedding James' and Texas' first children, twin daughters Sarah Josephine and Annie "Fannie" Josephine were born.

While the Allen twins came into this world in Arkansas, an 1885 census conducted in Lewis County, Washington Territory found J.P. Allen - and likely the rest of his family - residing in that region of the Pacific Northwest.  What had lured the Allens there is not documented, but likely it was the availability of new farmland.

The Allen family did not tarry long in Washington, as by September 17 of the following year, they had migrated southward to Oregon's Grand Ronde valley. Again, what drew them there is not documented. Neither is it documented why, by July 9, 1888, when son Walter Harval was born, the family had once more returned northward to Washington Territory. Precisely where in Washington Territory the Allens were residing at the time of the birth is not known, but the U.S. veteran census for 1890 placed them in the eastern Washington Lincoln County township of Yarwood.

It was circa 1890 that the former cavalryman began to experience physical problems. The first was a pain in his right side that, although he did not know it at the time, was a hernia. By 1899, then residing in Spokane County near the community of Medical Lake, he was additionally suffering from hemorrhoids, plus rheumatism in both knees and ankles. Claiming he could only perform manual labor one third of the time, he was seeking a U.S. Government disability pension based on these ailments which he traced back to his days of Civil War soldiering. Although the admission date is not available in existing documents, a pension of some dollar amount was granted. And, in 1907, that pension stipend was upped to $12 per month.

Prior to the 1907 pension increase the Allen family configuration went through additional changes and household moves. Firstly, in 1894 son Sydney was born. He would be the final addition to the household.  Secondly, the census for 1900 found that James and family had moved from the far eastern side of Washington State to the far western side as farmer Allen was then residing in the King County community of Kirkland. Besides James and his wife, also in the home at the time was daughter Mary and her husband Wineford Inman plus Joshua, Sarah, Fannie Otis, Walter and Sydney.  The final occupant of the household was a boarder named William D. Conner. Tragically, both Walter and Sydney would die during the calendar year 1906. [Ed. note: While no details relating to the why of the deaths is presented in existing documents, very likely they were due to an epidemic of the flu which swept through Snohomish County in 1905/06.] Lastly, by the time the $12 monthly pension was granted in November, l907 the family had made another move - their final - northward to the small rural community of Oso in northern Snohomish County.

1910. Dawn of a new decade.  The U.S. census for that year found the Allen’s in Oso. By that time the household size had shrunk markedly and consisted only of James, Texas and sons Joshua and Otis. James' occupation was denoted as laborer.  A decade later that "laborer" classification was clarified with the addition of "pole camp" to the designation. Besides James and Texas, still in the home was son Otis - now a logging camp laborer - and his wife Bertha.

1922. Beginning this year James' health began to markedly fail. As of February 22nd, and going forward, he would require "personal aid and care". On May 8, 1927 Texas made the following plea to the U.S. Pension Department for more assistance: "On account of (his) physical condition for more than a year I - his wife of 44 years - have been constantly called to his bed. It is impossible for me to care for him without constant help. We only have our small home perhaps valu(ed) $1000 and no personal property or money (except his) pension." The old soldier's ailments at the time were noted as chronic Bright's (kidney) disease, hemorrhoids, rheumatism, left inguinal hernia, umbilical hernia and an abdominal hernia. Later that same month a physician's report read, in part as follows: "Physically I found him fairly well nourished. Age 82 - head, neck and extremities negative. Lungs normal. Heart moderately enlarged.....abdominal hernia the size of an orange. Unable to stand alone and spends all of time in bed except when attendants lift him out onto a chair. Unable to feed self on account of paralysis agitans. At times has involuntary defecation. Necessary to have someone constantly in attendance.  Mentally, rather marked senile dementia is present.  Based on (these findings) he should be granted the highest amount of pension possible as well as extra allowances for service attendants."  James pension was jumped to $90 per month.

Former Civil War cavalryman James K.P. Allen died May 2nd, 1928. He was 82.2 years of age. Two days later he was buried in the Oso community cemetery.

Only days following her husband's passing Texas began the paperwork process to continue receiving at least a portion of her late husband's disability pension. Of note here is that she signed the pension papers with "her X mark." It appears Texas could not write and, likely, could not read. The widow's pension was granted as, at the time of her death, Texas was receiving $40 per month from the U.S. Government.

Cared for by the widow of one of her sons, Texas Allen remained in her Oso home until the end of her days. Also in the household were the widow's two young sons. Diagnosed with cancer of the lip in February, 1932 Texas died from that disease and chronic myocarditis (heart disease) on 3/31/32. She was buried beside James.