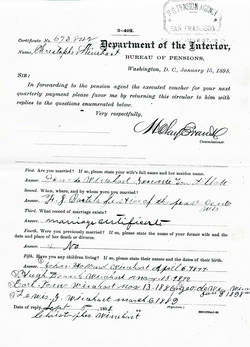 The 1st, a three year “western theater” unit, left Wisconsin shortly after federal muster, proceeding to scout and railroad guard duty in Missouri and Arkansas.  It received its baptism of fire in the latter state.  The unit was to remain active in Missouri until 6/63 when it was ordered to Nashville, TN.  That fall the regiment participated in the battle of Chickamauga, covering the Union retreat on the second day.  Conflicts with the enemy in Tennessee continued until mid ’64 when the 1st joined Union Gen. Sherman’s Atlanta campaign.  In this arena, it attacked a force of 2000 rebels near Cambellton, GA, but was forced to retire.  In 8/12/64 the regiment reached Cartersville via Marietta.  In 11/64 it was sent to St. Louis, MO to be remounted.  In early December, 1864 the 1st again moved to Nashville and, after a severe engagement, assisted in driving the enemy from Hopkinsville.  Operations in Kentucky and Alabama followed.  On 5/6/65 a detachment of the 1st set out in search of fleeing Confed. Pres. Jefferson Davis.  Coming upon armed men, the troopers opened fire.  It was not until a prisoner was taken that it was discovered the supposed “enemy” was a unit of Michigan soldiers also pursuing Davis.  Although Davis was not captured until after the regiments had fired upon one another, many would always believe the 1st Wisconsin was entitled to at least partial credit for the capture.  Stationing at Macon, GA preceded final muster.

NOTE: The original birth/death bio on Christopher Winehart was written in the early days of the Civil War Veterans Buried In Washington State project. In March, 2018 it was updated with the addition of extensive, new family information, despite this improvement, the profile still lacks input from detailed National Archive documents.

Christopher “Chris” Winehart was born in January, 1843.No birth date has been found within available documentation. His place of birth was Sussex, Franklin County, NJ.

Parents of Christopher were Phillip (b. ca. 1808 Bavaria, Germany) and Elizabeth (nee Zeek b. ca. 1820 NJ) Winehart. The Wineharts were farmers.

Parents of Christopher were Phillip (b. ca. 1808 Bavaria, Germany) and Elizabeth (nee Zeek b. ca. 1820 NJ) Winehart. The Wineharts were farmers.

From all appearances, Christopher was the eldest of seven Winehart children. His younger siblings were: Margaret (b. 1846/’47 NJ), Augustus (b.ca. 1848/’49 NJ), Mary Ann (b. 1851 NJ), Francis H. (b. 1853 NJ), Susan (b. 1855 NJ) and /Elizabeth (b. 1858 NJ). While no additional information is available pertaining to his birth family or his childhood, formative and teenaged years, we do know that on some unspecified date between 1858 after Elizabeth, the last of the Winehart children was born, Phillip and family quitted New Jersey in favor of the “frontier” state of  Wisconsin  While we do not know where they may have originally settled, by the time of the 1870 they were living  in or around the community of Peshtigo located in Marinette County, Wisconsin. More on the significance of this locale, later.

In July, 1864, in Wisconsin, 5’ 10” farmer farm laborer /laborer Christopher joined the U.S. Army.  It appears approximately half of his subsequent military tenure was spent in the hospital at Bowling Green, KY suffering from acute diarrhea and rheumatism.  Private Winehart would later apply for and be granted a small monthly governmental pension based on ailments which traced back to his days of Civil War soldiering.

Post war information on Christopher is, at best, sketchy.  The War of the Rebellion behind him, he appears to have returned to Wisconsin and once again resumed work as a farm laborer, likely on his parents’ Peshtigo farm. That was where census takers of 1870 found he, his younger brother, Francis and their parents.

The following year, 1871, proved to be bitter sweet for Christopher. On 4/10 of that year he applied for (likely a 160 acre) homestead. Later that same year tragedy struck his birth family

On 10/8/71 a massive forest fire – the deadliest wildfire in American history – swept Wisconsin, especially the area in and around Peshtigo, Marinette County.  Somewhere between 1500 and 2000 people perished in the conflagration including both of Christopher’s parents and two of his siblings. Those siblings were his sister, Margaret, and his brother, Augustus.

It appears that Christopher and family removed from Wisconsin to the Puget Sound area of Washington State circa 1891 after the birth of son Lewis.  Records are silent as to why the move was made, but likely it was to be near adult son or sons already living in the area. In 1900 the family address was the Ludwig addition. located  in Snohomish County.

The final Winehart child, George, was born in Snohomish County, WA.. .  He was just shy of his 12th birthday when his mother, Jennie, died on 9/12/10 at home in the Ludwig addition of Snohomish.  She was/is buried in the Snohomish G.A.R, Cemetery in Snohomish, Snohomish County.

Christopher, who at the time of his wife’s death was a resident of Washington Soldiers’ Home in Orting, Pierce County, WA passed away five days later on 9/19/10. His earthly remains were transported to Snohomish for burial beside Jennie.

Left without parents, guardianship of George was assumed by older brother Earl.  George continued to receive his father’s $12 monthly pension until he reached his 16th birthday.  Earl, as a member of Co. E, 157th Inf., U.S. Army, was killed in action in Europe during WWI.  The Snohomish American Legion Post #96 is named after him.