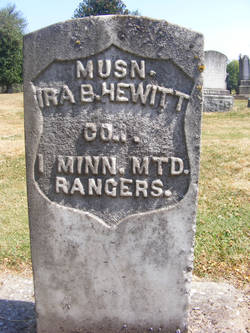 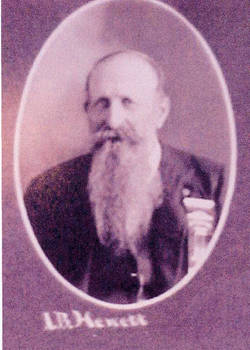 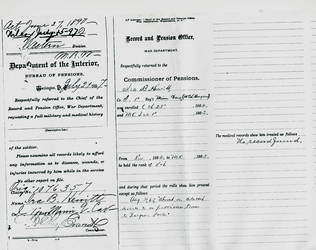 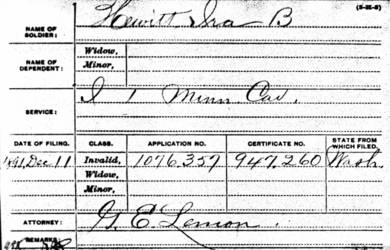 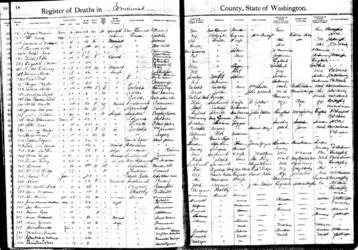 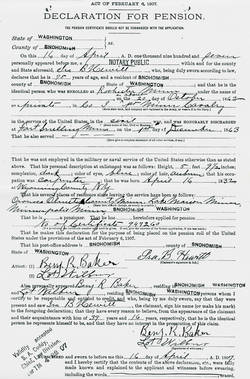 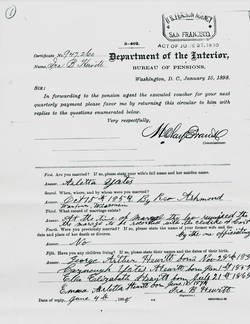 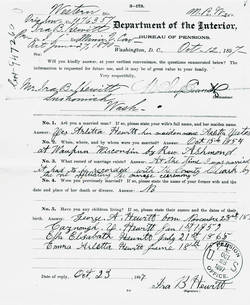 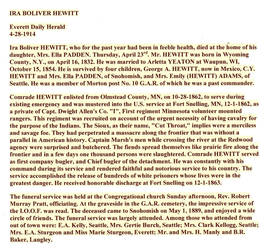 The “Mounted Rangers,” a twelve company, one-year unit, was thrown together in the fall of 1862 to deal with the Sioux uprising which had bloodied Minnesota since August. Many of the enlistees had lost wives, children, or were relatives to Indian massacres.

In light of this “crisis situation” the unit’s first three companies were immediately detailed “in state” for guard and patrol duty. In the spring of 1863 nine companies of the 1st assembled at Camp Pope for the Campaign of the Missouri.

Although the regiment engaged the hostiles in the battles of Big Mound, Dead Buffalo Lake, and Stony Lake, the harsh plains environment they encountered would prove more deadly to man and beast than did the fighting. Companies of the 1st were mustered out during the fall and winter of 1863/64, having never fired a shot at Johnny Reb.

NOTE: The original birth – to – death biographical profile of Ira Hewitt was created during the early years of the Civil War Veterans Buried In Washington State project. As a result it suffered from size and availability research sources. The biography which follows was written during March, 2019 While it contains many more details than the original, it still lacks the depth and detail of many recent entries to this website which draw heavily upon military, pension and other veteran – related documents housed in the National Archives in Washington, D.C.

George and Betsey Hewitt produced four children. Ira was second of the four. Older than he was brother Eli D. (b. 1828/’29 NY). [A Civil War veteran who served in the 1st MN Heavy Artillery, Eli is buried in the Grand Army Of The Republic Cemetery located in Snohomish, Snohomish Co., WA.] Younger than he was Maria M. (b. 1835 PA) and Albert K. (b. 1839 PA).

At the time of the 1860 U.S. Census Ira and family were residing in Waupun Village South Ward Dodge Co., WI. Ira listed his occupation as “master carpenter.”

As noted by the birth states of the Hewitt children, the first two were born in Wisconsin while the last two were birthed in Minnesota. Exactly when and why the Hewitt’s moved from Wisconsin to Minnesota is not known. However, the Hewitt family was in Minnesota by the time - in 1862 - when Ira enlisted in the U.S. Army.

Entering the U.S. Army in (blank) 1862 the 5’9” Private Hewitt served “as first company bugler as well as chief bugler of his detachment.” Military records indicate the only absence from his unit was an 8/31/63 notation: “on detached service to a provision train.” Regarding his military tenure Private Hewitt’s obituary observed he “rendered faithful and notorious service to his country, (accomplishing) the release of hundreds of white prisoners whose lives were in the greatest danger.”

Leaving the army Mr. Hewitt reportedly resided and farmed in three Minnesota locations before immigrating to Snohomish, Snohomish Co., WA Terr. /St.  in 1889. However, only two communities of residence have been identified in available documentation. They are Brownton McCloud Co., MN and Collins McCloud Co., MN.

It has always been our belief that upon arriving in Washington Territory/State, the Hewitt’s settled in or near the community of Snohomish City located in Snohomish County, WA. However, in conjunction with this 2019 update it was discovered that as early as 11/16/91 Ira was issued the patent (deed) on a homestead tract of land located in eastern Washington’s Klickitat County in The patent issue would have meant the Hewitt family resided upon and developed the homestead ed property – likely 160 acres – for five years.  This would mean the Hewitt’s resided in Klickitat County for that period of time before moving westward to the Puget Sound region’s Snohomish County.

Shortly after moving to Washington the rigors of Civil War campaigning began taking their toll on the aging veteran. Seeking a U.S. Government pension in 1891, the application focused on rheumatism, heart disease, poor eyesight, loss of teeth, running sore on face, corns, and bunions.

Arletta Hewitt died 4/29/00. Details of her passing are not available. She was/is buried in the Grand Army Of The Republic (G.A.R.) Cemetery located in Snohomish, Snohomish County, WA.

After Arletta’s death Ira remained in Snohomish. The U.S. Census for 1900 found him there working as a janitor in one of the local schools.

Ira lived until 4/22/14. After being in “feeble health” for a year, he died at the Snohomish home of daughter Ella. At the time of his passing the Past Commander of Snohomish’s G.A.R. Post #10 was receiving a $24 monthly pension from the U.S. Government. Burial was/is beside Arletta in the G.A.R. Cemetery.