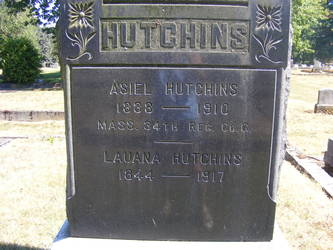 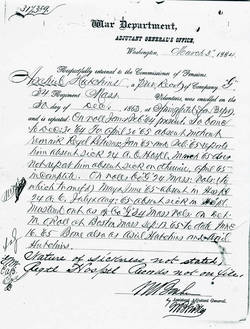 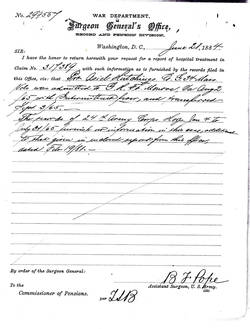 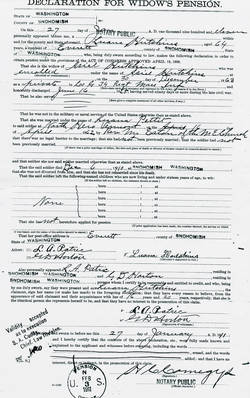 The 34th, a three-year unit, was composed of companies recruited in five counties of Massachusetts.  Following Federal muster it left the state for the defenses of Washington where it remained until 7/63.  On 7/9//63 the regiment was ordered to Harper’s Ferry, VA.  By that fall it had met the enemy at Ripon with slight loss.

An expedition up the Shenandoah Valley as far as Harrisonburg followed. Returning to Harper’s Ferry the 34th remained there until spring, 1864 when it again returned to “The Valley.”  1864 was to test the combat metal of the 34th.  On 5/15/64 at the battle of New Market it lost 221 officers and men, of whom 39 were killed or mortally wounded.

In July, at Piedmont 110 were lost, including 22 killed or mortally wounded.  Retreat into West Virginia followed.  In August Union Gen. Phillip Sheridan took command in the Shenandoah.  As an element of the Army of the Shenandoah the 34th took part in Sheridan’s Valley Campaign suffering heavily at Opequon (Winchester) and less so at Fisher’s Hill, Stickley’s Farm, and Cedar Creek.

With the Shenandoah Valley secured by the Federals, the 34th was transferred to the Army of the James and spent the winter of ‘64/65 in front of Petersburg.  In March 1865 it was engaged at Hatcher’s Run and suffered heavy losses at Ft. Gregg.

The regiment then joined in the pursuit and capture of the Confed. Gen. R.E. Lee’s Army of Northern Virginia.  With the War for all practical purposes over, encampments at Lynchburg and Richmond preceded final muster and discharge.

NOTE: The original birth – to – death biographical profile on Asiel - there are numerous spellings of his first name – Hutchins was created during the early years of the Civil War Veterans Buried In Washington State project. As a result it suffered from both size and research resource limitations. The biography which follows was written in March, 2019. While it is more detailed than the original is still lacks the depth found in more recent additions to this website which draw heavily upon veteran-related military, pension and other documents housed in the National Archives located in Washington, D.C.

Asiel Hutchins was born 4/15/40 or ‘41 in Vermont. As the Hutchins family lived in North Hero Grand Isle Co, Vermont from at least 1840 through 1860 likely that was his community of birth.

When he enlisted in the Army, six foot tall, blue-eyed Asahel listed his residence a Springfield, MA and his occupation as “sailor.” Why these two seeming discrepancies exist in an otherwise Vermont -oriented life is not known.

Despite the high level of action seen by his regiment, Private Hutchins’ tenure in the U.S. Army appears to have been fairly uneventful.  The only documented notations pertaining to his war years list him as sick in the hospital in 1865 with bronchitis and intermittent fever.

The war behind him it appears Asiel returned to his wife and family in Vermont. Post-war Asiel would adopt his father’s trade of “carpenter” and “joiner.”

During post-war years, Asiel and family were to remove from Vermont to Iowa where they would reside in three locations - only two of which, Monona Clayton Co.1870 and Clermont Fayette Co. 1880. are documented -   locations. From Iowa they headed even further west west to Snohomish Co., WA.  Although exactly when and why the family moved to the Puget Sound area is not known, their first documented presence in this area is in the fall of 1899. In Washington they settled in or near the City of Snohomish located in the county of the same name.

After Asiel’s passing Luana continued to reside in Snohomish. She also continued to receive at least a portion of her late husband’s pension.  At the time of her death on 3/24/17 she was receiving a $20 per month stipend. She was/ is buried beside Asahel in the G.A.R. Cemetery.