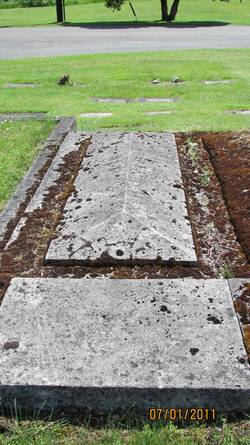 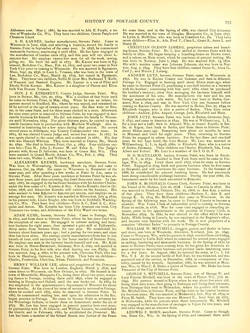 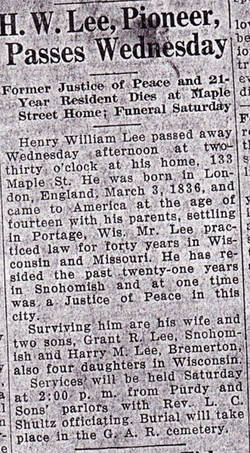 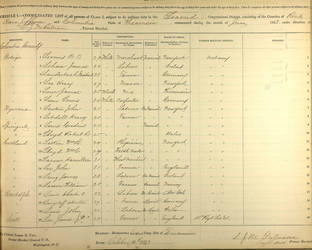 Henry Wm Lee listed as Men to serve from WI

*NOTE: According to a newspaper article pertaining to the life of Henry W. Lee, reportedly a distant relative of Robert E. Lee, published at some point prior to his death in 1928, and reprinted, in part, afterwards, he related having been in the U.S. Army during the American Civil War. However, his tale of this period in his life is brief and confusing in terms of its detail. Thus, as of this writing, although a Henry Lee of Wisconsin with an enlistment date coinciding with the year he notes, Mr. Lee’s claims cannot be adequately tied to this or any other Civil War participant. Perhaps additional information will be found at a later time which will shed light on this mystery.

*NOTE:  According to a newspaper article published prior to the death of Henry W. Lee in 1928, he told of having served in the U.S. Army during the America’s War Of The Rebellion.  However, his tale of this period in his life is brief and confusing.  Thus, as of this writing, although a Henry Lee of Wisconsin with an enlistment date coinciding with the year the individual discussed herein denotes his military service, our  Mr. Lee’s claims cannot be adequately tied to this or any other Civil War participant.  Perhaps additional information will be found at a later time which will shed light on this mystery.

Henry William Lee was reportedly born on 3/3/36 in London, England. In terms of his birth family, it is known that his father’s name was also Henry. The name of his mother is not documented. Finally, he had at least two siblings, both being brothers.

Taught to read at home, at age six Henry entered one of England’s “free schools.” His education continued until age thirteen when his father claimed “he had school learning enough for a worker.”

On January 1, 1850 the Lee family set out for America with approximately 400 other steerage passengers aboard a sailing ship.  Beset by a terrible storm, the ship returned to England and remained in port for 50 days before resuming its journey to New Orleans, LA.  Ultimately the Lees made their way northward and settled in Portage City Columbia Co., WI where Henry assumed the trade of a stone/brick mason, an occupation which he pursued until 1863.

According to the previously mentioned, newspaper article, (During the War of the Rebellion) “In 1863….under the last call, for three months’ troops he (Henry) enlisted as did most of the men of Wisconsin of fighting age.  Before being called to muster, three years’ troops were demanded, it being claimed that trained soldiers and not raw recruits were necessary to put down the rebellion, although the battle of Pittsburg Landing (Shiloh, TN 4/62) proved different, related Mr. Lee.  Under the last call. volunteering ceased and drafting was resorted to.  His enlistment was reportedly in the quartermaster department.   Before his three months of service expired, he says he found that saving slavery and a national debt was desired and, as he was opposed to both these propositions, he returned home.”

From 1863 to 1869 Mr. Lee worked in the building trade(s), farmed and read law.  During the latter year he was admitted to the bar. He subsequently practiced law in Wisconsin, Minnesota and Washington State.

1880. A decade later. The Lees were still in Wisconsin, but then residing in or near the Portage County community of Stevens Point. This intra state move may have come about as early as 1875.

Post 1882, but pre-1900 Henry and Lydia divorced. By the dawn of the twentieth century Henry had moved from Wisconsin to Minnesota. In that state, as of 1900, he – and his new wife – were residing in or near the community of North Red Lake.

Circa 1897 Henry had remarried. His second bride was the never married, Norwegian born Martina (perhaps middle initial B.)  Bakken. No specific birth date has been found for Martina. However, she was reportedly born in the month of January. Birth years for her range from 1861 through 1864 to 1868.

In 1907 the Lees removed from Thief River Falls, MN to Snohomish, Snohomish Co., WA.  Why they came to the Puget Sound area of western Washington State is not clear.

At one point Henry was Justice of the Peace for Snohomish City.  As Mr. Lee put it, he quit practicing law when “the people of Snohomish and its neighborhood went to Everett to sell their eggs and buy their law.”

Harry William Lee died Wednesday, 4/25/28 at his Maple Street home in Snohomish.  His Snohomish Tribune newspaper obituary noted him as survived by “his wife and two sons, Grant R. Lee, Snohomish and Harry M. Lee, Bremerton, plus four daughters in Wisconsin.”  At death Henry had reached 92.1 years of age. Burial was in the Snohomish Grand Army Of The Republic (G.A.R.) Cemetery.

After Henry’s death Martina remained in Snohomish County. She died 10/5/48 in that county’s community of Monroe. She was/is buried beside Henry in the G.A.R. Cemetery.