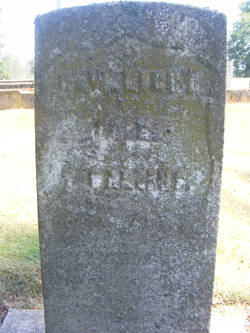 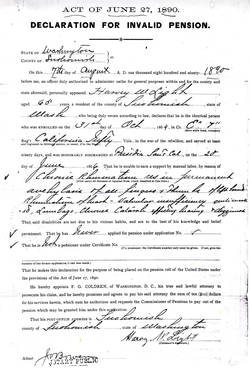 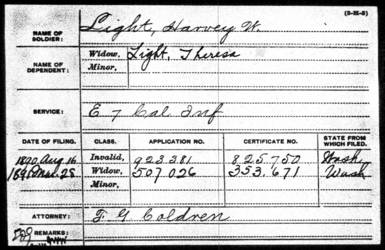 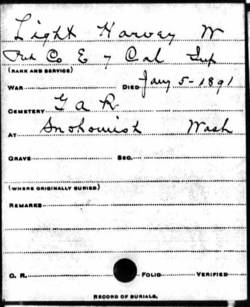 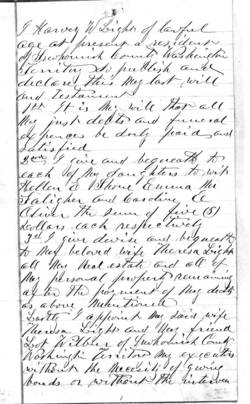 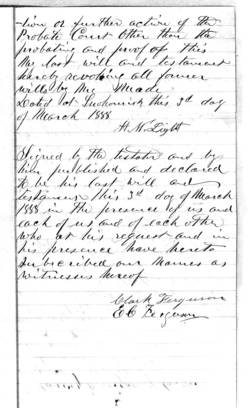 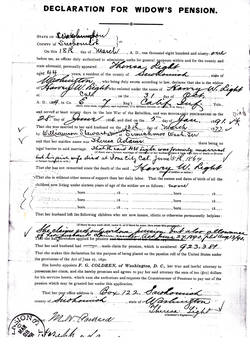 Organized from the State of California at large, the 7th had detachments serving at different posts throughout Territorial Arizona during most of its three year term of service.

In July, ‘65 one such detachment while on a “scout” in the Guachuca Mountains was surrounded and attacked by 100/200 Indians. After an engagement lasting approximately one hour the Indians were driven off with considerable loss.

Losses to the 7th on this occasion were two killed and one wounded.

In the spring of 1864 the regiment was ordered to the Presidio, San Francisco where, from March 31 to June 28, 1866 it was mustered out of existence.

NOTE:  The original birth – to – death biographical profile of Harvey Light was written during the early years of the Civil War Veterans Buried In Washington State project. As a result it was limited in size and the number of available research resources.

The biography which follows was created in April, 2019. While it contains more details than its predecessor, it still lacks the depth of more recent additions to this website which draw heavily upon veteran-related military, pension and other

Documents found in the National Archives located in Washington, D.C.

Harvey W. Light was born in New York State. His birth year was 1825. As of this writing no month or specific date of birth

has been located in available document. Also not found have been the names of his parents and possible siblings.

The first information found on Harvey comes from the U.S. Census of 1850. By that year he had marred. All we know about his wife is that her first name was Susan and her middle name was Mary. No maiden surname has been found. She was born ca. 1827.As of 1850 the couple was residing in Fayette Co., IA where Harvey listed his occupation as farmer.

In 1850 the Lights were sharing their home with a couple with the last name Miller. Mr. Miller was a shoemaker.

Likely the Lights’1850 community of residence in Fayette County was Westfield. That is said based on the fact that in 1853 Harvey was appointed to the position of clerk in the Westfield post office.

1860 again found the Lights in Westfield. By that time Harvey was noting his occupation as “harness Maker. Added to the

Household was a third daughter, Caroline “Carrie” Amanda (b. 5/29 Fayette Co. IA). The 1860 census was the last census for Susan Mary.

.Although the documentation is scant, it appears that between 1860 and 1864 the Lights quitted Iowa in favor of California. Exactly why and when the Lights moved from the mid- west to the west is not known. What is known is that on

6/15/64 in California Susan Mary died. No details pertaining to her passing are known.

After his wife’s death, on 10/1/64 in Jackson Amador Co., California Harvey enlisted in the U.S. Army Infantry.  Private Light would subsequently successfully serve his term of enlistment and be mustered out on 6/28/66

The War of The Rebellion and army life behind him, in 1870 Harvey was residing in Salt Point City, Sonoma Co., CA. In the home with him were daughters Emma and Caroline. At that time Harvey’s occupation was “lumberman.”

By early 1877 former Union private Harvey Light had moved to Washington Territory. There, on 3/13/77, he remarried to Canadian born Theresa (b. 1848) Adams who was then residing in Whatcom Co. By 1880 the couple had settled south of there in Snohomish, Snohomish Co., WA where, 55 year old Harvey’s occupation was listed as “farmer.”

On 8/7/90, shortly after implementation of the federal “Invalid Pension” Act 65 year old Harvey Light applied for a stipend on the grounds he was unable to earn support by manual labor because of chronic and permanent illness traced to his military service.  Listed were rheumatism of fingers and thumb of left had, valvular insufficiency of the heart due to rheumatism and catarrh (inflammation of nasal membranes and air passages) which affected his hearing and caused dizziness.

Harvey light died 1/6/91. Initially buried in another location, his remains were moved to their current resting place in the Snohomish, Snohomish Co., WA Grand Army of the Republic (G.A.R.) Cemetery when that facility was established in 1898.

After Harvey’s passing Theresa applied for and received a widow’s allowance of $8 per moth based on her late husband’s military service. The payments ceased after 6/4/93 when Mrs. Light remarried. Her fate and final resting place is not known.