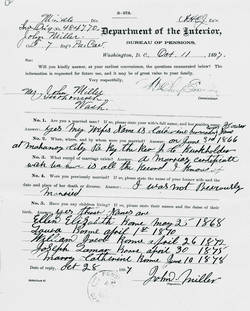 Considered “Emergency Troops of 1863,” the 27th was one of eight Pennsylvania regiments formed as rumors concerning Confederate forces invading Border States grew into fact. Volunteers were called by Gov. Curtin to cover the existing emergency.

As an infantry/militia unit, the 27th performed duties at Columbia and Wrightsville and also participated in the defense/destruction of a railroad bridge.  The regiment, like its contemporaries, was mustered out not long after the battle of Gettysburg.

Formed in 1861 the 7th, a three-year unit, left the state almost immediately and, during the next two years, was almost continuously active in scouts, skirmishes and battles throughout the War’s “western theater.”  In early 1864 most of the regiment’s original members reenlisted and, with new recruits, the unit was brought up to strength of 1800 men.

Drill and preparation at Columbia, TN preceded the spring campaign during which the 7th saw action in Georgia at Rome, Dallas, Villa Rica Road, Big Shanty, and McAfee Crossroads, Noonday Creek and Kennesaw Mtn. to name but a few Georgia locations.  The strenuous campaigning cost the regiment in both men and horses and lead to a period of refitting at Louisville, KY.

After the battle of Nashville (12/15-16/64), the 7th was stationed at Gravelly Springs, AL where it again drilled and made preparations for spring ’65 campaigning.  In late March, 1865 the unit raided through Alabama and Georgia with Gen. Wilson.  It lost heavily leading the assault upon the enemy’s works at Selma, AL and concluded its combat career at Columbus, KY.

NOTE: The original birth – to – death biographical profile of John Miller was written during the early years of the Civil War Veterans Buried In Washington State project. As a result, it suffered in size and in lack of research resources.

The biography which follows was created in April, 2019. While it is much more detailed than its predecessor, it still lacks the depth of more recent additions to this website which draw heavily upon veteran-related military, pension and other

Documents housed in the National Archives located in Washington, D.C.

The 5’8” dark complexioned teenaged warrior’s two terms – the first with an infantry regiment, the second with the cavalry -  appear to have been fairly benign.  No significant details are documented on his stint with the 27th.  The only traumas noted during his tenure with the 7th were his being hospitalized with the measles and contraction of a severe cold which settled in his liver and kidneys, causing him continued pain and suffering in those organs until his death. After the war Private Miller returned to civilian life in Schuylkill Co., PA.

As noted by the birth places of the Miller children, during their child-producing years John and Elizabeth remained in Pennsylvania, but appear to have moved around a great deal. This pattern may reflect the fact that John was not a farmer, so he and his family moved around a lot to where ever jobs were

As noted by the birth places of the Miller children, during their child-producing years John and Elizabeth resided in Pennsylvania, but appear to have moved around a lot. This pattern may reflect the fact that John was not a farmer, so he and his family had to go where work was available

. In 1870 that was Union Schuylkill Co., where John was employed as a laborer. A decade later, in 1880 it was West Mahanoy Schuylkill Co. where he was a teamster. Who knows how many other moves were made in years when there was no census tally to document them.

In 1866 John and Catherine removed from Pennsylvania to Illinois.  They remained there for one year before settling in Wisconsin for another.  The family then moved westward to the Puget Sound area of Washington Territory, where it appears they spent four years in Seattle located in King County before moving northward and putting down long-term roots in Snohomish County.

What prompted the Millers to move to the Puget Sound area is not known.  In 1900 their address was the Snohomish County community of Granite Falls. There, for one, the nature of John’s “laborer” job is not documented.

Sometime after the 1900 U.S. Census was taken the Millers moved Granite Falls southward to the Snohomish County community of Snohomish. There, Catherine Miller died on 1/8 or 9/09.  Details of her passing are not known. Her burial was/is in the Snohomish Grand Army Of The Republic (G.A.R.) Cemetery.

After Catherine’s death John remained in Snohomish City.  In 1910 living with him was daughter Mary C. and son William. John’s occupation at that time was listed as “logger in logging camp.” In 1920, living in his home was now married daughter Mary C., and her husband Michael Snyder and son John M.  Also, under his roof was John E. Houser (Housser), his late wife’s brother. During this, his last census, our John listed his occupation as dairy farmer.

Our John Miller died in Snohomish on  6/5/26.  At passing he was receiving a $50 monthly government disability stipend based on health problems attributed to his Civil War soldiering in the 7th PA Cav. He was/is buried beside Catherine in the G.A.R. Cemetery.