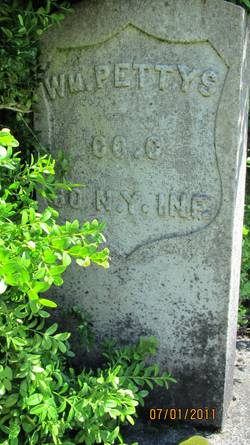 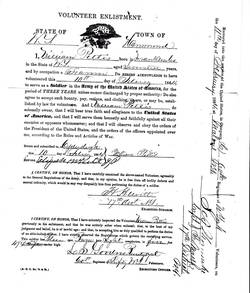 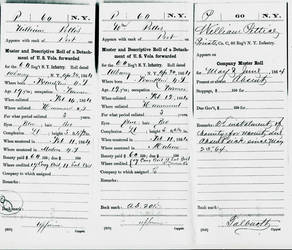 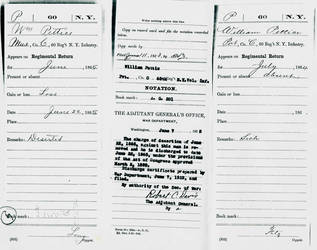 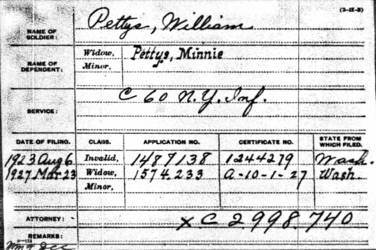 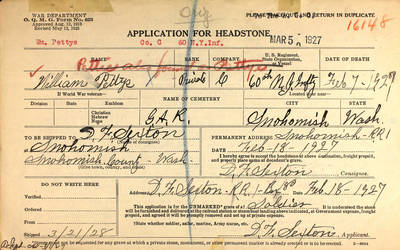 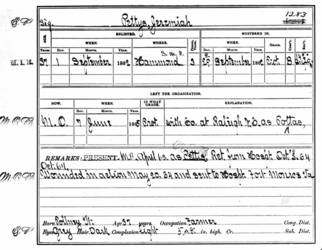 The 60th, a three year unit also known as the 1st St. Lawrence regiment, was to serve in both the “eastern” and western” theaters of war. It left the state for Washington on 11/4/61 and was stationed in that vicinity during the ensuing winter. The following spring it was assigned to Gen. Dix’s railroad brigade before, in midyear, moving into the Shenandoah Valley to participate in the Virginia campaign.

That September at Antietam, MD the regiment lost 22 killed, wounded and missing. Posting at Harper’s Ferry, VA and winter quarters at Stafford Court House followed. In May ’63 the 60th lost 66 at Chancellorsville and, at Gettysburg, PA, suffered dearly in the defense of Culp’s Hill. Shortly thereafter the regiment was stationed at Bridgeport, AL.

In the “west” the regiment was present at the battle of Wauhatchie, TN and during the Chattanooga campaign. As a veteran organization the 60th shared in the Atlanta campaign, the march to the sea, and north through the Carolinas. Final muster was in Virginia.

The original birth – to – death biographical profile of William Pettys was created during the early years of the Civil War Veterans Buried In Washington State project. As a result, it was limited in both size and the availability of research resources.

The biography which follows was written in May, 2019. While it is more detailed than its predecessor, it does not reflect the depth of more recent additions to this website which draw heavily upon military, pension and other veteran-related documents housed in the National Archives in Washington, D.C.
Ed.

*Note:  The cemetery headstone surname spelling is “Pettys.”  The same spelling is used in local newspaper obituaries.  On military documents, however the name is reflected as Pettic, Pettis, and Petrie as well as Pettys! Herein we are adopting the Pettys spelling.

Specifics on William Joseph Pettys’ life are scarce.  This is primarily due to the fact that as a Civil War deserter who was not exonerated until late in life, he was not eligible for a government pension stipend and therefore did not leave behind a paper trail of documents that could provide a wealth of personal data.

Whatever his age, by May of ’64 the 5’4 ½” former farmer/laborer was marching through Georgia with Union Gen. W.T. Sherman. Before we get to Sherman, however we have to cover the following:

Joseph’s parents were Jeremiah “Jerry” (b. 1823 VT) and Jane E. (nee Royal (b. 1824 Canada) Pettys. The only census tally reflecting information on Jeremiah is from 1860. In that census he noted his occupation as “day laborer.”

On 2/10/64 in Hammond St. Lawrence Co., NY William joined the U.S. Army. It was not long after his enlistment that he was in Georgia.  There, on 5/27/64 during the battle of Dallas, Private Pettys received an unspecified wound, which apparently hospitalized him through August.  By June, 1865, with the war ended, William, unable or at least unwilling to await his regiment’s final muster, deserted. In doing so he was charged with not turning in the following U.S. Government property: 1 knapsack and straps, 1 haversack, 1 canteen and 1 half shelter tent.  Total value $9.60.

As with many American Civil War veterans, where William settled after leaving the service is not known. In the 1870 U.S. Census, however, he was located in Jacksonport Door Co., WI. Although the census tally claimed he was married, there were no family members living with him. William’s occupation at the time was listed as “laborer.”

By 1905 William and family were in Wausaukee Marinette Co., WI. William’s occupation at that time was “saw fuker.”

Two years later, however, - in 1907 -   they were in Washington State. Likely William and Minnie came to the Puget Sound area to be near the families of several of the children who were living in the region.

As of 1920 William, Minnie, their married daughter Mabel and her two children plus a boarder were living in Everett located in Snohomish Co., WA. In Everett William was working for the gas company.

William Pettys died on 2/7/27 at home in Everett after what was described as “an extended illness.” Burial was/is in the Grand Army Of The Republic (G.A.R.) Cemetery east Everett in Snohomish, Snohomish Co., WA.

After William’s passing Minnie continued to reside in Everett. She lived to 92 years of age.  She died on 4/16 or 18/47 and was/is buried beside William in the Snohomish G.A.R. Cemetery.