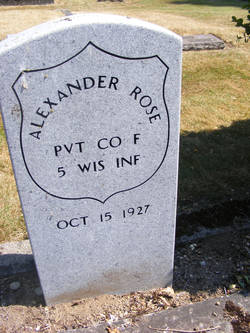 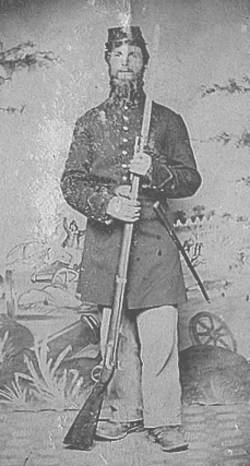 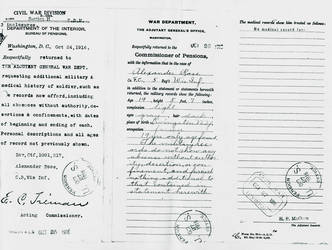 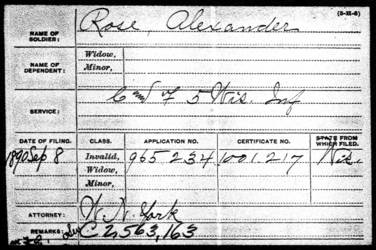 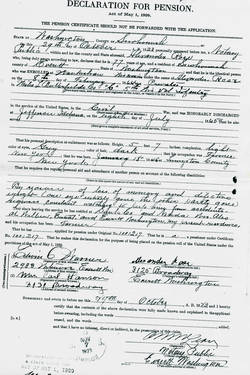 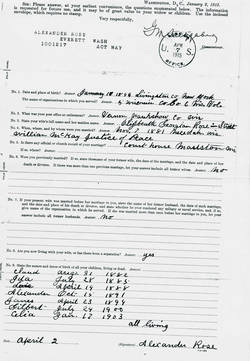 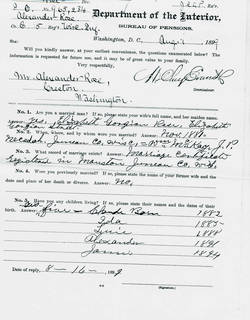 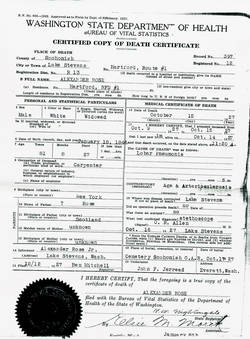 This three year “eastern theater” regiment left Wisconsin almost immediately after Federal muster.  In the spring of 1862 it was conspicuous in the battle of Williamsburg, VA and elsewhere during the Peninsula Campaign.  It next fought at Antietam, MD and, later that year, Fredricksburg, VA.  In May, 1863 the 5th fought in the battle of Chancellorsville, VA.

October found the unit on duty in New York City enforcing the draft.  1864 saw the regiment engaged in The Wilderness, at Spottsylvania, Cold Harbor and Petersburg, VA.  After being sent to assist in the defense of Washington, D.C. against Confed. Gen. Jubal Early’s raid, on 8/3/64 original enlistees were mustered out.

The 5th now an independent battalion consisting of three companies composed of reenlisted veterans and recruits, became involved in Federal actions within Virginia’s Shenandoah Valley.  Returned to regimental status later in ’64 the 5th moved into the trenches around Petersburg, VA.

In early 1865 at Petersburgh the 5th came to the relief of Ft. Stedman, was involved in the final assault on the city’s defenses, and, afterwards fought at Sailor’s Creek where “it advanced through a swamp, waist deep, in the face of a galling fire and compelled the enemy to surrender.”

NOTE: The original birth – to – death biographical profile of Alexander Rose was created during the early years of the Civil War Veterans Buried In Washington State project. As a result it was limited in size and in terms of the availability of research resources.

The biography which follows was written in May, 2019. Although it contains many more details than its predecessor, it lacks the depth of more recent additions to this website which draw heavily upon veteran-related military, pension and other documents housed in the National Archives in Washington, D.C.

Alexander Rose was born January 18th in Montgomery, l New York State’s Livingston County.  There is some uncertainty as to whether the year was 1845 (that year tends to be supported by military records) or 1846. (The latter is noted by Alexander himself.)

The mother of Alexander was Eleanor “Ellen” (nee McIntyre). She was born 12/27/17 in Livingston Co., New York died 1902 WI. Eleanor and Hugh married in New York.

Just weeks past his eighteenth/nineteenth birthday young Alexander, then residing in Wisconsin, left the farm and enlisted in the U.S. Army.  Within the 5th Wisconsin infantry he was first assigned to a unit without an official alphabetical designation.  That unit appears to have subsequently become company “F” at time of Federal muster.

Private Alexander remained with company “F” until 7/13/64 when, for some unexplained reason, he transferred to company “C” where he remained for the balance of his military tenure.  As for the nature of that tenure, it apparently was uneventful in terms of illness, wounding, attendance or behavioral infractions.

Discharged from the military, Alexander returned to Wisconsin.  There, at some point in time, he assumed the occupation of carpenter.

Exactly when and why Alexander and family came to Washington Territory/State is not known.  As for when, they were definitely here by 1898.  As for why, considering that later pension documents list Mr. Rose’s occupation as “farmer,” it may have been the lure of open farmland that drew them westward.

The Rose family’s first residences were in eastern Washington’s Lincoln County communities of Wilbur and /or Creston (1899). As of 1903, they were in Entiat Chelan, County.

By 1910 the Roses had moved westward over the Cascade Mountains. The census for that year noted they were farming in the Welangdon precinct of Snohomish, Snohomish County.

A decade later, in 1920, Alexander, Elizabeth five of their sons - and daughter Celia were still in Snohomish County, but then residing in the City of Everett. No occupation is listed for Alexander, but all the sons were reportedly driving trucks for a transfer company.

By October, 1923 the aging veteran’s health was beginning to fail, as noted in a pension request made to the U.S. Government: “Loss of memory and defective eyesight. (One eye completely gone, the other partly gone).  Requires constant watching to keep from accidents.” (Alexander’s attorney during this period was fellow Civil War comrade Edwin C. Warner. Snohomish G.A.R. Cemetery Row: Maus. Site: 1).

Noting the pension request above. At some point in time Alexander had applied for and been granted a U.S. Government disability pension based on ailments or other physically debilitating conditions which traced back to his days of Civil War soldiering.  At his passing Alexander was receiving a princely $72 per month stipend.

Alexander Rose died 10/15/27.  Primary cause of death was listed as lobar pneumonia with age and arteriosclerosis contributing.  The death certificate noted his age to be 81 years, 8 months, and 27 days.  His place of residence was listed as the Hartford area near the Snohomish Co. town of Lake Stevens.  This may have been the home of son Alexander, Jr.
Burial was/is in the G.A.R. Cemetery beside Elizabeth.