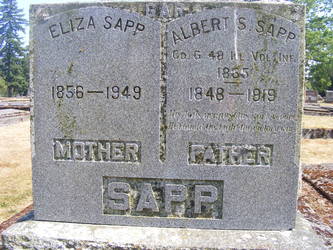 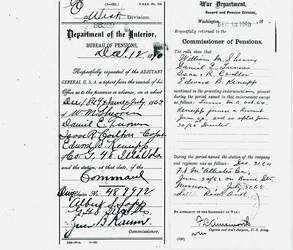 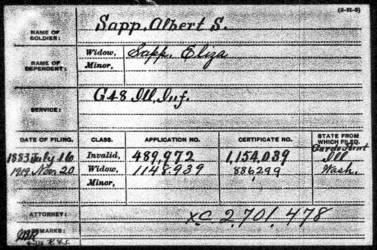 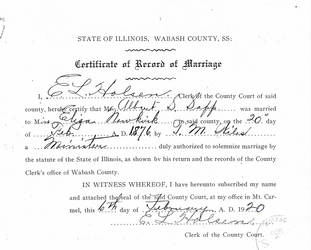 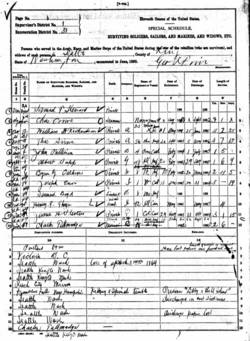 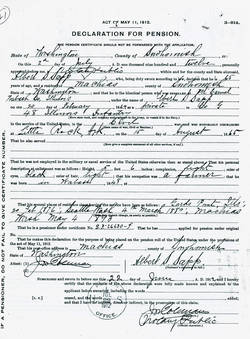 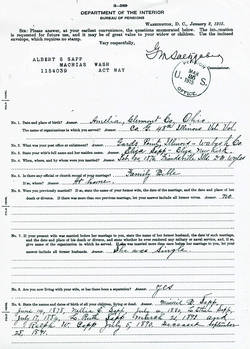 Charles Sapp brother of Albert affidavit on birth 1848 for Pension 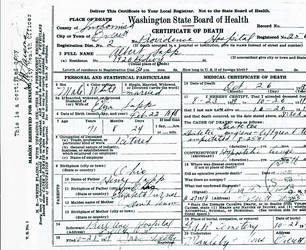 This three-year “western theater” regiment first engaged the enemy while performing reconnaissance for Union Gen. U.S. Grant near Columbus, KY in January, 1862.  From there it moved to Ft. Donelson, where it was severely engaged and suffered heavy losses.

At Shiloh, TN that April the regiment lost over half its strength in killed and wounded.  The siege at Corinth, MS and garrison duty at Bethel carried the 48th into 1863.  Mid ’63 found the unit at Memphis, TN before moving to Vicksburg, MS and on to Jackson with Gen. W.T. Sherman.  At the latter location the 48th lost 45 killed and wounded.

A transfer to eastern Tennessee took the regiment to the battle of Missionary Ridge then on to the relief of Union Gen. A. Burnside at Knoxville, KY.  Arriving at Scottsboro, AL on 1/1/64 over ninety percent of the campaign weary 48th reenlisted.

A one month furlough was followed by the Atlanta campaign and marching to the sea with Sherman.  The regiment then marched northward through the Carolinas.  Stops at Washington D.C. and Louisville, KY preceded final muster.

NOTE: The original birth – to – death biographical profile of Albert Sapp was created during the early years of the Civil War Veterans Buried In Washington State project. As a result it was limited in terms of size and research resources.

The biography which follows was written in May, 2019. Although it contains many more details than its predecessor it lacks the depth of more recent additions to this website which draw heavily upon veteran-related military, pension and other documents housed in the National Archives in Washington, D.C.

As noted by the birth states of the Sapp children, sometime after the birth of Lavana in 1852 and before that of Charles in 1855 Henry moved his family from Ohio to Illinois. Henry died in Illinois in 1859 leaving his widowed wife to raise their seven children. In 1860 Elizabeth and her brood were farming in Friendsville Wabash Co., IL.

In February, 1864 5’6” teen-aged farm boy Albert, perhaps by lying about his age, entered the U.S. Army.  One month later, in Alabama, Private Sapp contracted measles, the results of which would plague him not only throughout his military tenure, but the remainder of his life.

An affidavit written  by a fellow soldier during the 18809s/’90s noted in part: “On or about May the 3rd (the) 48th regiment broke camp for the memorable Atlanta Campaign.  (Private Sapp) being hardly able to do duty (because of the measles), but being a good soldier never shirking duty, remained with his regiment…. Marching day to day (caused) him to become unfit for duty (because of) chills, fever…. and yellow jaundice (due to malarial poisoning).  Albert complained to me frequently of being sick and up to time of muster out of service looked bad- pale and swarthy- (because of) measles and exposure.” One additional document notes simply. “Wounded in head (during) action at Dallas, GA 5/27/64.”

Military service behind him, Albert returned to Illinois where it appears he initially settled in Gards Point which is located in Wabash Co. By 1870, however, he was working as a farm laborer in the Clermont Co. community of Mt. Carmel.

As noted, Minnie, Nellie and Ethel were born in Illinois.  Ruth was born in Washington as was son Ralph W.  Identity of the sixth child, likely born/died in Illinois, is not documented.

In 1880 the Sapp family was farming in Lick Prairie Wabash Co., IL. They remained in Illinois until March, 1889 when they removed to the Puget Sound region of Washington Territory/State. The move westward was made because it was hoped the milder climate in western Washington would have a positive effect on Albert’s health problems.

The Sapps first settled in Seattle located in King Co. There, in 1892 Albert noted his occupation as “merchant.” As of May, 1893 the family had moved north of there to the Snohomish Co., community of Machias. In Machias Albert operated a grocery store.

By 1900 the Sapps were still in Snohomish Co., but as of that year their address was the community of Pilchuck. Again, Albert’s occupation was “store keeper.

Post Rebellion Albert applied for and was granted a U.S. Government disability pension based on ailments and other debilitating conditions which traced back to his days of Civil War soldiering. At death he was receiving a stipend of $39 per month.

As afore indicated, after his move west Albert continued to struggle with a number of health problems, some of which stemmed from his military service days. All contributed to his death 10/26/19 at the age of 71 yrs., 8 months. He died in Providence Hospital, Everett Snohomish Co., WA.

Although many factors lead to his passing, the primary  cause of death was listed as diabetes. Burial was/is in the Snohomish, Snohomish Co., Grand Army Of The Republic (G.A.R.) Cemetery.