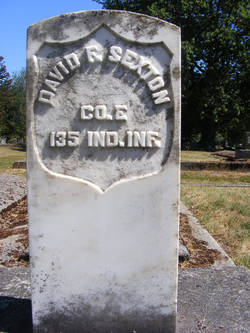 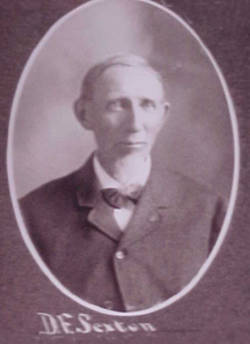 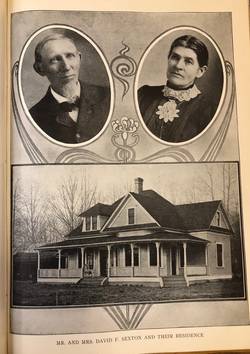 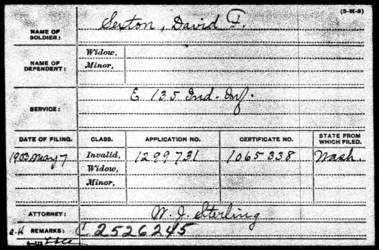 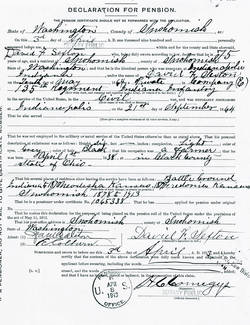 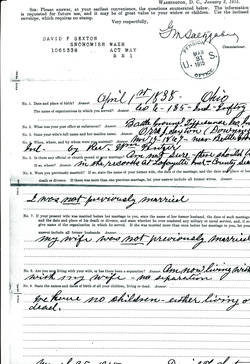 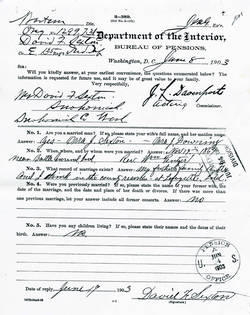 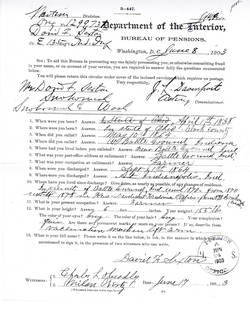 The 135th was one of Indiana’s quota of eight “100 day” regiments.  It was called up from the 8th Congressional District largely to perform guard and garrison duty, thereby relieving veteran troops for active field assignments during the important 1864 campaigns of Union generals U.S. Grant and W.T. Sherman.

Sent to Nashville, TN, the unit was assigned to guard lines of the Nashville & Chattanooga, Tennessee & Alabama, and Memphis & Charleston railroads.  They kept at this work beyond the time for which they had enlisted, helping to keep open Sherman’s lines of communication and transportation.

NOTE: The original birth-to-death biographical profile on Robert Ackley was created in the early days of the Civil War Vets Buried in Washington State project. As such, it suffered from limitations in size and resources to be drawn upon for its writing. What follows is an up dated profile written in May, 2018. While it provides many details not available in the
original, it still does not reflect the depth and degree of research resources from the National Archives in Washington, D.C. utilized in recent biographies.

David Fink Sexton born 4/1/1838 Montgomery Co. OH to Joseph (2/16/1808/OH died 10/21/1878 Wilson Co, KS) and Lydia Casad (b. 4/12/1799/Sussex Co. NJ) his father was a Blacksmith by trade after serving 7 years as an apprentice in his native state of OH. He remained in Ohio until 1842.  Joseph and his family then traveled by covered wagon to Jasper Co. IN practicing his trade.  In 1851 Mr. Sexton became in poor health due to Typhoid fever complications and was unable to perform his normal occupation.  He then became a contractor, and was involved in building Indiana’s first rail road in that area called The New Albany and Salem.  By 1859 Mr. Sexton was not able to perform any physical labor and became an inspiration to his wife, Rev. Lydia Sexton whom had acquired a job as Clergyman at Leavenworth, KS prison in 1870. Joseph died 10/21/1878 in Leavenworth, KS.  Mrs. Lydia Casad Sexton was born 4/12/1799 in Rock Port Sussex Co. NJ the daughter of Thomas C. Casad (1763/NJ died 1808/NY) and Abigail Tingley (1763/NJ died 1825/OH).   Lydia became an orphan at age 15 and removed to OH where she maimed Isaac Cox who died by 1824 when she married Joseph Moore. By 1829 she had become Mrs. Lydia Sexton.  She practiced her Religious background over a period of fifty years and was noted as the oldest women Clergy in the U. S.  David had two brothers Thomas T (b, 1834/OH) and Joseph Zodok (b. 1841/OH). In 1889 after the death of her husband Rev. Lydia came to Washington with her son Joseph A Sexton and continued to preach until her health failed her and she became blind. She died 12/24/895 in Seattle, King Co. WA.

During the War of the Rebellion 6’0” farmer David Sexton claimed membership in companies “A” and “E” of the 135th Indiana. The government, however, would later note his name could “not be found on the rolls of co. “A”.  While his term of service was apparently uneventful, in later years David attributed suffering from “rheumatism, stomach trouble and general debility” to his army days.  While these claims resulted in the granting of a government pension, the amount of this monthly stipend is not noted.

Following the War David returned to Indiana, settling near the community of Battleground.  David married Orra Jane Downing 11/19/1867 in Tippecanoe Co. IN.  Orra Jane Downing was the daughter of John H Downing 1807/Delaware died 1888/IN and Sarah Knight 12/24/1809 Kent Co. Delaware died 7/10/1885 Tippecanoe Co. IN. The union would produce no children. The Sextons remained at Battleground until 1870 when they removed to Neodesha, KS.  They remained at Neodesha until 1877 when they resettled into a life of farming in Fredonia, KS.  The Kansas climate however proved detrimental to David’s health, so on 5/13/78 he and Orra headed west in a mule team drawn wagon. They arrived in Olympia 10/4/1878 and boarded a steamer for Seattle, and from there boarded the steamer Fanny Lake for Snohomish arriving 10/7/1878.

Arriving on the shores of Puget Sound David found his health improved.  He then determined to settle in the forestlands of the Snohomish Valley near the small community of Snohomish-population 200.  In Snohomish David established a 200-acre farm along the Pilchuck River northeast of the present day city.  As one of the few persons in the area to own a team of horses, he also hauled freight for neighbors, logging camps and mills. David became a noted rancher and raised a fine herd of Jersey cows.  He was well known for his fruit crop and became Snohomish County Horticultural Association president, the position he held for many years.

In terms of civic involvement, amongst the many groups with which he was involved, he was a charter member of the Snohomish G.A.R. post and served as its commander.  As the years went on David sold all (the Sexton District) but 15 acres of his farm.  Orra Jane Sexton died in 2/14/1928 and is buried at Snohomish Grand Army of the Republic Cemetery.

In 1931 an automobile accident confined David to a wheelchair.  Still, his faculties reportedly remained remarkably sharp until 1936 when his hearing and eyesight began to fail.  On 4/16/37 after “having been ill ten days”, Civil War veteran David Sexton died.  At the time of death at age 99 years he was the last member of the Morton G.A.R. post still residing in Snohomish.