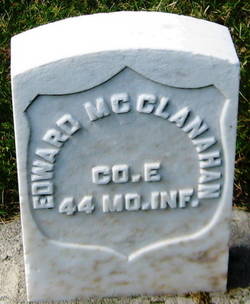 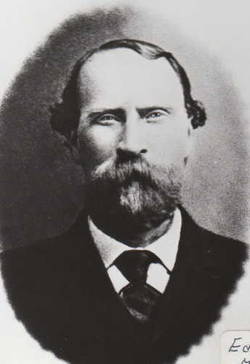 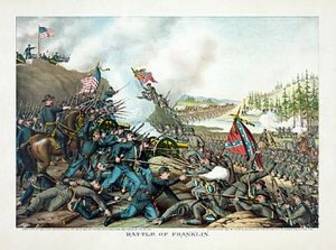 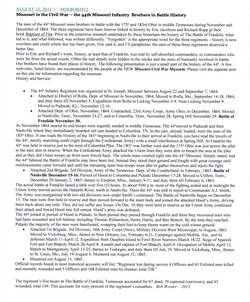 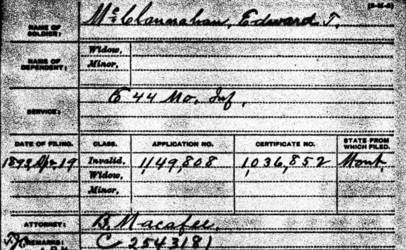 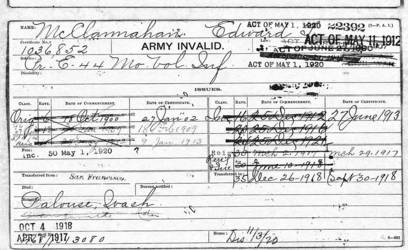 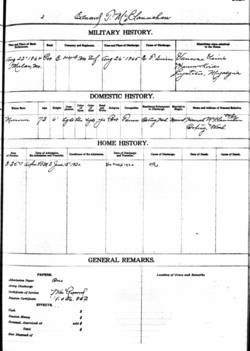 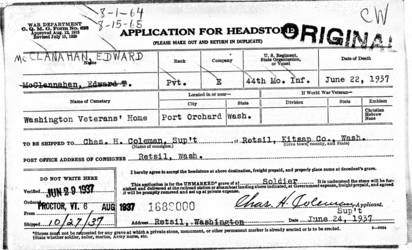 The 44th, a one year Union "western theater" regiment, was organized during the month of August, 1864 in St. Joseph, MO where most of it was mustered into United States service. Before that muster was completed, however, the unit was ordered to Rolla, MO in order to intercept advancing rebel forces under the command of Confederate General Sterling Price.

Thereafter, in early November '64 the 44th was sent to Paducah, KY where it arrived on the 16th and went into camp. There it remained until the 24th when it was ordered to Nashville, TN where it reported to Union General Seth Thomas and was immediately sent Columbus, KY.

While at Columbus if fought at Spring Hill and Franklin, TN losing - in the latter engagement - 157 killed and wounded. Returning to Nashville the 44th concluded the year by being assigned to The Army Of The Tennessee. It would remain with this command for the remainder of its period of service.

After the defeat of Confederate General John Bell Hood at Nashville, the 44th was engaged in pursuing the retreating rebels. Then, in early January, 1865 it went into camp at Eastport, MS.

Leaving Eastport in early February; the unit arrived at New Orleans, LA. It remained there until the latter part of March when it was ordered to Dauphin Island, AL.

From Dauphin Island the unit moved to Cedar Point and Fish River until being sent to Spanish Fort in front of Mobile. After the surrender of that place it was on duty at Montgomery and Tuskegee in that state as well as Vicksburg in Tennessee.  The regiment then moved to St. Louis for final muster.

*NOTE:  Surname spellings for Edward are McClanahan and McClannahan. Because the spelling is McClanahan on his military headstone, we are using this spelling herein.

As is the case with many Civil War veterans and other Americans born during the ante-bellum period, their exact origins are lost in the mists of time. It is no different in terms of the birth date and birth place of Edward Thomas McClanahan. Dates and places vary for both. However, for our purposes, the date we are adopting is 12/25/46 - one which was given by the veteran himself. As for location, we are choosing the state of Kentucky, the locale which is noted in most census tallies.

Edward's father was Hoge McClanahan. The name of his mother is not known. Also not known is the occupation of Hoge and whether or not there were other children beyond Edward in his family.

The first documental evidence on Edward comes from his enlistment in the U.S. Army during the War of The Rebellion. Even here, however, information varies.  According to family sources he enlisted on 8/1/64 in Milan, Sullivan County, Missouri. He was then mustered into Federal service on 9/1/64 in St. Joseph, Buchanan County, Missouri. Information from the American Civil War Research Database notes that he enrolled and was mustered in at St. Joseph on 9/1/64.

Private McClanahan's muster out date was 8/15/65. The location was Benton, Davies County, Missouri. At separation he was owed his $100 enlistment bonus or "bounty" and he owed $7.20 to the U.S, Government for CC & GE (Garrison Equippage)  as well as $.62 to a sutler. (Note: Sutlers were private businessmen who followed the armies and sold a variety of products ranging from foodstuffs, tobacco and dry goods to the soldiers.)

Having survived the war, exactly where Edward settled and what he did upon his return to civilian life is not known. What is known is that he was still in Missouri and, at some point during the mid to late 1870s, in Chariton County; he married the previously wed Hanna McCooley Dravenstott. She brought to the union one child, son John Dravenstott (b. 9/71 MO), whom Edward would raise as if he were his own even to the point of listing his surname as McClanahan in the U.S. Census.  Edward and Hannah would produce two children of their own: William Martin (b. 10/8/79 Joplin, Jasper Co., MO) and Sally (no b.d. no b.p.).

While Edward and Hannah were wed in Charitan Co., Mo, as noted above, the couple's first child was birthed in Jasper County. Likely, then, the McClanahan's lived there for a time. However, in 1880 the census tally found them back in Chariton County. In that database we get a glimpse of Edward's occupation which was noted as "farmer".

There is no census data on the McClanahan's for 1890 as most of that information was destroyed by fire. For 1900, however, the listing found them in or near the now-nonexistent community of Turnbow, Whitman County, located in the far eastern part of Washington State. What had drawn the family from Missouri to that remote location is not documented, but perhaps it was the lure of new farmland.  According to family members, during the long trek westward Sally died and Edward spent some time in a Montana sanitarium. Where and why Sally died and what lead to Edward's institutionalization is not known.

1910. Another decade. Another U.S. Census. This one placed farmer Edward and family still in Whitman County. A specific town, however, is not tagged.


By 1920 the McClanahan household had departed eastern Washington and was residing in the western portion of that state in the Pierce County community of Orting. While one of the state soldier's homes was located in that community it appears that Edward was not a residence of that institution as also listed in his household, besides wife Hannah, was seventeen year old grandson Edward T. McClanahan.

Five years later, on January 10, 1925, Hannah died. The cause of her passing is not known. Of significance in connection with her death is where she died and where she was buried.

It appears that as of early 1925 Edward and Hannah were living in Retsil, Kitsap County, Washington as residents of the state's other soldiers home. This is emphasized by the fact that she was laid to rest in the Veterans Home Cemetery located in or near that community. Exactly when and why the couple had moved to Retsil is not documented.

The 1930 census for Retsil noted that 84 year old Edward as still there living as an "inmate" in the Veterans Home. That is where he died on 6/22/37. Burial was in the Homers cemetery overlooking Puget Sound. At his passing he left behind four grandchildren and more than eleven great grandchildren, some of whom he had actually held in his arms.